Jin Ping Mei, or The Plum in the Golden Vase (Chinese: 金瓶梅; pinyin: Jīn Píng Méi, also translated as The Golden Lotus) is a Chinese naturalistic novel composed in the vernacular (baihua) during the late Ming Dynasty. The author was Lanling Xiaoxiao Sheng (蘭陵笑笑生), "The Scoffing Scholar of Lanling", a clear pseudonym,[1] and his identity is otherwise unknown.[2] (The only clue was that he hailed from Lanling, or present-day Shandong.) Earliest versions of the novel exist only in handwritten scripts; the first block-printed book was released only in 1610.[3] The more complete version today comprises one hundred chapters,[4] amounting to over a thousand pages.[5]

Jin Ping Mei is sometimes considered to be the fifth classical novel after the Four Great Classical Novels. Its graphically explicit depiction of sexuality has garnered the novel a level of notoriety in China akin to Fanny Hill in the English literature.

Within Chinese societies, Jin Ping Mei is sometimes considered to be pornographic material, due to its contents,[4] though critical studies of it have emerged since the Qing Dynasty. It has been described by Princeton University Press (regarding the Roy translation) as "a landmark in the development of the narrative art form - not only from a specifically Chinese perspective but in a world-historical context...noted for its surprisingly modern technique" and "with the possible exception of The Tale of Genji (ca. 1010) and Don Quixote (1605, 1615), there is no earlier work of prose fiction of equal sophistication in world literature."[6]

The novel describes, in great detail, the downfall of the Ximen household during the years 1111–27 (during the Northern Song Dynasty). The story centres on Ximen Qing (西門慶), a corrupt social climber and lustful merchant who is wealthy enough to marry a consort of six wives and concubines.

A key episode of the novel, the seduction of the adulterous Pan Jinlian, occurs early in the book and is taken from an episode from Water Margin. After secretly murdering the husband of Pan, Ximen Qing marries her as one of his wives. The story follows the domestic sexual struggles of the women within his clan as they clamor for prestige and influence amidst the gradual decline of the Ximen clan.

In the course of the novel, Ximen has 19 sexual partners, including his 6 wives and mistresses. There are 72 detailed sexual episodes.[7] 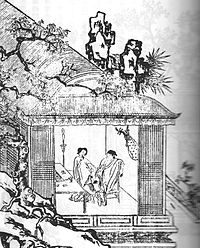 For centuries identified as pornographic and officially banned most of the time, the book has nevertheless been read surreptitiously by many of the educated class. Only since the Qing Dynasty has it been re-evaluated as literature. Structurally taut, full of classical Chinese poetry and surprisingly mature even as early fiction, it also deals with larger sociological issues—such as the role of women in ancient Chinese society, and sexual politics—while functioning concurrently as a novel of manners and an allegory of human corruption.

Carnal Prayer Mat author Li Yu called it along with Romance of the Three Kingdoms, Water Margin, and Journey to the West one of the Four Marvelous Masterpieces (四大奇书). Acclaimed Qing critic Zhang Zhupo described it as "the most incredible book existing under the heavens" (第一奇書), and in the 20th century, influential author Lu Xun also held it in great esteem.

The story contains a surprising number of descriptions of sexual objects and coital techniques that would be considered fetish today, as well as a large amount of bawdy jokes and oblique but still titillating sexual euphemisms. Some critics have argued that the highly sexual descriptions are essential, and have exerted what has been termed a "liberating" influence on other Chinese novels that deal with sexuality, most notably the Dream of the Red Chamber.

Little is known about the author except for some conjectures that he may have been a Taoist priest who wrote to expose the disintegrating morality and corruption of the late Ming Dynasty. 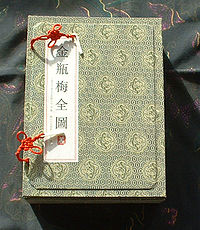 A Chinese edition of the novel

The Golden Lotus (1939), translated by Clement Egerton with the assistance of the celebrated Chinese novelist Lao She, who because of the nature of the novel refused to claim any credit for its English version. The translation is a classic of its time and is very readable today. It was an expurgated, though complete, version. Some of the more explicit parts were rendered into Latin.

In 2008, as part of the Library of Chinese Classics, the Clement Egerton version was republished. In this version there are 5 volumes as the book is in a mirror format with the simplified Chinese next to the English translation. [8]

The graphic novelist Magnus created a truncated graphic novel loosely based on the Jin Ping Mei, entitled the 110 Sexpills which focused on the sexual exploits and eventual downfall of Ximen Qing (albeit with the Ximen surname being taken as the character's given name and vice versa).

Zi-Yun Wei was a noted scholar known for his study and published works regarding the Jin Ping Mei.[10]