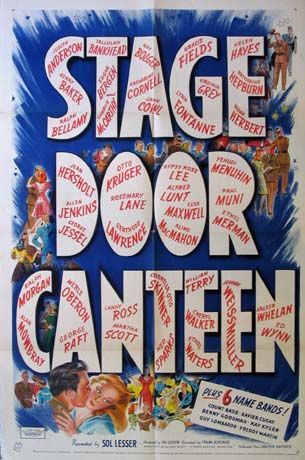 "Stage Door Canteen" (1943) is a produced by Productions and distributed by . It was directed by and features many cameo appearances by celebrities, and the majority of the film is essentially a filmed concert although there is also a storyline to the film.

"Stage Door Canteen" is presently in the in and for this reason is widely available in many DVD and VHS releases of varying quality.

The film, made in wartime, celebrates the work of the "Stage Door Canteen", created in as a recreational center for servicemen on leave to socialize with, be entertained or served by theatrical celebrities.

The real Stage Door Canteen on 44th Street could not be used for the filming as it was too busy receiving real servicemen. It was recreated in New York and at the studio in . There also was a Stage Door Canteen in the Academy of Music Building in .

The storyline of the film follows several women who volunteer for the Canteen and who must adhere to strict rules of conduct, the most important of which is that while their job is to provide friendly companionship to and be dance partners for the (often nervous) men who are soon to be sent into combat, no romantic fraternization is allowed. One volunteer who confesses to only becoming involved in the Canteen in order to be discovered by one of the Hollywood stars in attendance, ultimately finds herself falling in love with one of the soldiers.

Star appearances range from momentary cameos, such as , seen working in the canteen's kitchen, to more substantial roles such as , who helps advance the plot.

Most of the cameos were filmed at the studio, but a number of spots -- 's, for example -- were filmed in .

* [http://www.imdb.com/title/tt0036384/ Stage Door Canteen] at
* [http://www.stagedoorcanteen.net Big band from Massachusetts area that plays music from the era of the movie.