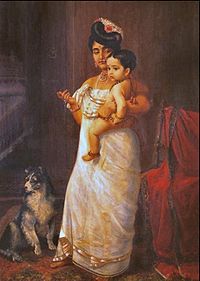 Mundum neriyathum (set-mundu or mundu-set) is the traditional clothing of women in Kerala, South India. It is the oldest remnant of the ancient form of the saree which covered only the lower part of the body.[1] In the mundum neriyathum, the most basic traditional piece is the mundu or lower garment which is the ancient form of the saree denoted in Malayalam as 'Thuni' (meaning cloth), while the neriyathu forms the upper garment the mundu.[2] The mundum neryathum consists of two pieces of cloth, and could be worn in either the traditional style with the neriyathu tucked inside the blouse, or in the modern style with the neriyathu worn over the left shoulder.[1]

The mundum-neryathum is the extant form of the ancient saree referred to as "Sattika" in Buddhist and Jain literature.[3] The mundu is the surviving form of lower garment of the ancient clothing referred to as antariya worn in a special way (lower garment).[4] The neriyath is the modern adaptation of a thin scarf worn from the right shoulder to the left shoulder referred to in ancient Buddhist-Jain texts as the uttariya.[5] It is one of the remains of the pre-Hindu Buddhist-Jain culture that once flourished in Kerala and other parts of South India. The narrow borders along the mundum neriyathum drape are probably an adaptation of the Graeco-Roman costume called "palmyrene". In the palmyrene costume, the piece of cloth known as "palla" was a long piece of unstitched cloth with a coloured border and was worn over a long garment, pinned at the left shoulder.[6] The tradition of coloured borders along the present day mundum neryathum or pallu might have been influenced by the Graeco-Roman "Palla" or Palmyrene. The Malabar coast had flourishing overseas trade with the Mediterranean world since antiquity.[7] However, the pallu in its modern form was not in common use until very recently. In fact, as late as the 1970s, some populations in Kerala still did not use the pallu as the upper garment.[1]

Shakuntala, by Raja Ravivarma is shown draped in a variation of the mundum neriyathum forming the modern Nivi style.

The mundum neryathum is traditionally white or cream in colour and consists of two pieces of cloth, which have a coloured strip at the border known as kara. The piece of cloth that drapes the lower garment is called the mundu. It is worn below the navel and around the hips, similar to the mundu worn by men in Kerala. The piece of cloth that is worn as the upper garment is called the neriyathu. One end of the neriyathu is tucked inside the pavadai or petticoat and the remaining long end is worn across the front torso. The neriyathu is worn over a blouse that reaches quite above the breast bone. It is worn diagonally from along the right hips to the left shoulder and across the midriff, partly baring it. The remaining loose end of the neriyathu is left hanging from the left shoulder, resembling the ‘nivi saree’. Today the ‘nivi drape’, is the most common form of the saree.[8] A mundum neriyathum is starched before being draped and is worn over a blouse that matches the colour of the border or kara.

Ornamental and festive use

The kasavu or the golden border is either pure golden layer, copper coated or artificial. The fabric of mundu-sari is cotton and is always woven by hand. Kara or simple line designs adorn the bottom of these saris, while at times small peacock or temple designs embellish the pallu. The mundum neriyathum is also known as Set mundu, Kasavu mundu, Mundu-sari, set-sari, or set veshti. The veshti is another version of the saree which consists of a small upper clothing resembling a blouse-like garment worn without the pallu along with a mundu as lower garment.

The set-sari is worn as a garment that consists of a single piece of cloth. Otherwise, the set saree closely resembles the mundum neriyathum and is often worn by Malayali women as a quasi mundum neriyathum.

When set-mundu (mundum neriyathum) is worn, the kasavu border will be clearly visible on left side (the left thigh) of the person who wears it. This kasavu border is that of the neriyathu which is worn on the top of the mundu.

The mundum neriyathum is the cultural costume of women of the Malayali community and often referred as Kerala saree.[1] The grace and appeal of the golden borders contrasting with the otherwise plain white mundum neryathum of Keralite women has come to symbolize Malayali women. Both the traditional and modern styles of the mundum neryathum are depicted in the paintings of the Indian painter Raja Ravi Verma. The mundum neriyathum was modified in several paintings depicting Shakuntala from the mahabharatha to a style of draping now popularly known as the 'nivi saree' or 'national drape'. In one of his paintings the Indian subcontinent was shown as a mother wearing a flowing nivi saree.[8]