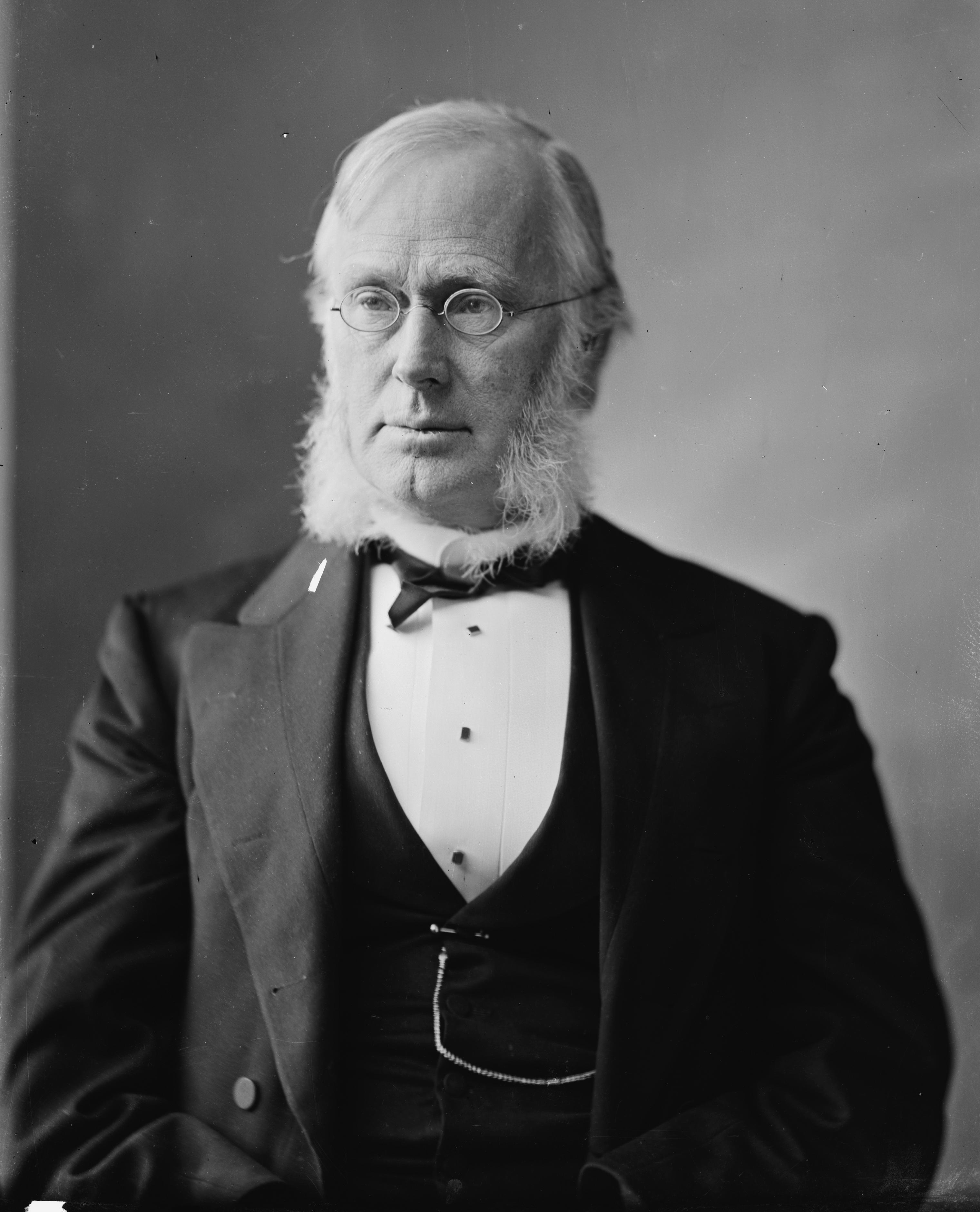 George Frisbie Hoar (, &ndash; , ) was a prominent and from Massachusetts. Hoar was born in . He was a member of an extended family that was politically prominent in 18th and 19th century New England.

Hoar graduated from in 1846, then studied law at and settled in where he practiced law before entering politics. Initially a member of the Free Soil Party, he joined the Republican Party shortly after its founding, and was elected to the (1852), and the (1857).

In 1865, Hoar was one of the founders of the Worcester County Free Institute of Industrial Science, now the . He represented Massachusetts as a member of the U.S. House of Representatives from 1869 through 1877, then served in the U.S. Senate until his death. He was a Republican, who generally avoided party partisanship and did not hesitate to criticize other members of his party whose actions or policies he believed were in error.

Hoar was long noted as a fighter against , and campaigned for the rights of and Native Americans. He argued in the Senate in favor of as early as 1886 and opposed the , 1882. As a member of the Congressional Electoral Commission, he was involved with settling the highly disputed . He authored the , and in 1888 he was chairman of the 1888 .

After the , Hoar became one of the Senate's most outspoken opponents of the of the administration. He denounced the , calling for allowing independence of the . He also denounced the U.S. intervention in .

cquote|You have sacrificed nearly ten thousand American lives—the flower of our youth. You have devastated provinces. You have slain uncounted thousands of the people you desire to benefit. You have established reconcentration camps. Your generals are coming home from their harvest bringing sheaves with them, in the shape of other thousands of sick and wounded and insane to drag out miserable lives, wrecked in body and mind. You make the American flag in the eyes of a numerous people the emblem of sacrilege in Christian churches, and of the burning of human dwellings, and of the horror of the water torture. Your practical statesmanship which disdains to take George Washington and Abraham Lincoln or the soldiers of the Revolution or of the Civil War as models, has looked in some cases to Spain for your example. I believe—nay, I know—that in general our officers and soldiers are humane. But in some cases they have carried on your warfare with a mixture of American ingenuity and Castilian cruelty.

Your practical statesmanship has succeeded in converting a people who three years ago were ready to kiss the hem of the garment of the American and to welcome him as a liberator, who thronged after your men when they landed on those islands with benediction and gratitude, into sullen and irreconcilable enemies, possessed of a hatred which centuries can not eradicate.

Hoar pushed for and served on the investigating alleged, and later confirmed, s in the . In addition to his political career, he was active in the and the , serving terms as president of both organizations. He was a regent of the in 1880, and a trustee of the . His , "Autobiography of Seventy Years" was published in 1903; it first appeared in serial form in "Scribner's" magazine.

Hoar enjoyed good health until June 1904. He died in Worcester, and was buried in . After his death, a of him was erected in front of Worcester's city hall, paid for by public donations.

Through his mother, Sarah Sherman, G.F. Hoar was a grandson of prominent political figure, and Sherman's second wife, . Roger Sherman signed the , and the .
* G.F. Hoar's father, , was a prominent who served on the state senate and the .
**GF Hoar's brother Ebenezer Rockwood Hoar was an Associate Justice of the , one of 's Attorneys General, and a nominee to the U.S. Supreme Court.
** GF Hoar's first cousin was and a U.S. Senator.
** Another of GF Hoar's first cousins, was US Secretary of State, U.S. Attorney General and a U.S. Senator.