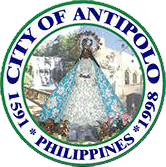 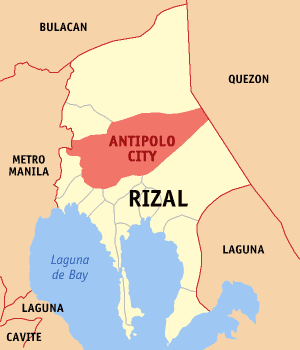 mapsize =
map_caption = Map of it uses bands to use the wate4r obsoresss lola basyang told me to give the people standing ovasion. =)) =))showing the location of Antipolo City

The City of Antipolo (Filipino: "Lungsod ng Antipolo") is a 1st class component city in the province of Rizal, . It was recently made the capital of Rizal; however the provincial capitol is still in in which was the former capital. According to the 2007 census, it has a population of 633,971 inhabitants ("470,866 people in 97,415 households in census 2000"). It has a land area of 306.10 square kilometers.

With the continuous expansion of Metro Manila, the city is now included in Manila built up area which reaches Cardona in its easternmost part.

The city was named after the Tipolo (breadfruit) tree ("Artocarpus incisa") which was in abundance in the area. Antipolo was also derived from the Greek words "antirl" meaning "a source of many products".

missionaries arrived in Antipolo in 1578 and built a church in Boso-Boso. In 1591 they were replaced by the who organized the village into a parish. They built a chapel at Sitio Sta. Cruz. By 1601 there are about 3,000 residing in Antipolo. At about the same period, the population dwindled, as they moved deeper into the mountains.

On , Governor-General brought from , the image of the Virgin Mary. Before he died, he bequeathed the image to the for the Antipolo Church. Tradition has it that the image was installed in Sitio Sta. Cruz and have been lost several times and each time it was found on a Tipolo tree. Because of these unusual incidents, it was decided in 1632 to erect the church at the site.

In 1639, the Chinese revolt reached Antipolo and burned the church to the ground; however, the image was unharmedFact|date=July 2007. The Virgin was taken to Sitio Ginapao and then brought to upon orders of the Governor-General. It stayed in for 14 years. Ten years after the incident the image was renamed "Nuestra Señora de la Paz y Buen Viaje" (Tagalog: "Ang Mahal na Birhen ng Kapayapaan at Mabuting Paglalayag"; "Our Lady of Peace and Good Voyage") and traveled five more times to , before it rested permanently in the town. A replica of the image of the Birhen ng Antipolo is now enshrined in the U.S. for all the immigrant Filipinos. The Oratory of Our Lady of Peace and Good Voyage, is located at the northeast corner of the Crypt Church of the Basilica of the National Shrine of the Immaculate Conception in Washington, D.C. A gift of the Filipino Catholic Community in the United States and around the world, this oratory honors a Marian devotion dating from the 1600s.

The took over Antipolo in 1864. It was during these years that the Virgin of Antipolo gained thousands of devotees. Devotees from Manila and nearby towns and provinces flock to Antipolo on foot along mountain trails and springs.

After a civil government was established in 1901 by the Americans, Valentin Sumulong became the first Presidente ("Alcalde") of the town. The province of Morong was renamed and some of the towns near Manila were made part of the province. In 1903, Antipolo, Teresa and Boso-Boso were merged under Act No. 1942 with Antipolo as the center of government.

On , the Philippine Commission granted the Manila Railroad Company a franchise to construct and operate a railway going to Antipolo. The railway by 1906 was running from Pasig up to Taytay-Cainta it was not until , that the first train reached Antipolo. In 1913, the sitios of Mayamot and Bulao became part of Antipolo, however on , , Teresa was separated from Antipolo.

The railway no longer exist. A paved road now lies over what used to be the railway which is called daang-bakal (railway). What used to be a station masters office is now inhabited by squatters. Not sure what the city government is planning to do with what is supposed to be a national heritage building/site.

During the two guerilla units continued the struggle during the Japanese occupation. They were the Hunters ROTC under Miguel Ver and Terry Adevoso and the Marking Filipino & American Troops which was established and led by Marcos Villa Agustin more popularly known under the name Brig. Gen. Agustin Marking. Many inhabitants were tortured and killed by the Japanese, including Mayor Pascual Oliveros and his son Reynaldo, Padre Eusebio Carreon, Padre Ariston Ocampo, Sis. Ma. Elizabeth Cagulanas, RVM, Sis. Ma. Consuelo Recio, RVM; Antonio Masangkay, and Alfonso Oliveros.

The liberation of Antipolo from the Japanese forces was bloody and devastating. On , Antipolo was heavily bombarded by American planes. Antipolo residents evacuated to Sitio Kulaike and up to the towns of Angono, Santolan, and Marikina. To protect the image from being destroyed, Procopio Angeles, then the sacristan mayor, and members of the community brought with them the Virgin of Antipolo. The bombings on March 6-7, 1945 destroyed the church and after twelve days of battle the American, Filipino soldiers and local guerrillas liberated the town on , . After the war a temporary church was built and the Virgin of Antipolo was returned from the Quiapo Church on , .

Devotees started to flock to the town and on , , the first procession of the Virgin of Antipolo was held starting at the hills of Pinagmisahan.

In 1948 a national committee was formed to undertake a nationwide fund raising campaign to build the Cathedral of Antipolo. It was about this time that the came to Antipolo.

On , , was proclaimed a by Pres. and on , , the Bishops of the proclaimed the Cathedral of Antipolo as the official shrine of the Virgin of Antipolo.

The Diocese of Antipolo was created on , , with Rev. Protacio G. Gungon, D.D as the first bishop of the diocese.

The 1995 Census registered Antipolo's population at 345,000. On , then Pres. signed No. 8505 making the Municipality of Antipolo into a component city of and on , it was ratified it in a plebiscite.

The seat of the Diocese of Antipolo is located at the Cathedral-Parish of the Immaculate Conception (National Shrine of Our Lady of Peace and Good Voyage [Nuestra Sra. Dela Paz y Buen Viaje] ). The diocese today is headed by His Excellency, Most Reverend Gabriel V. Reyes, D.D. The Bishop of Antipolo is assisted by an auxiliary bishop, the Most Reverend Francisco M. De Leon, D.D., who resides at the Diocesan Shrine of Our Lady of the Abandoned in Marikina City. The diocese has grown from a mere 17 parishes when it was carved out from the Archdiocese of Manila in 1983 and developed into 54 parishes at present, covering the whole province of Rizal and the city of Marikina. There were proposals of dividing the diocese to establish a new diocese in Marikina and elevating the Diocese of Antipolo into an archdiocese. Although all of these plans depend on recommendations being made by the local ordinary of Antipolo and the Apostolic Nunciature in the Philippines, some say that a few steps are already being done in preparation for the creation of the Diocese of Marikina.

The Diocese of Antipolo is set to celebrate the twenty fifth anniversary (silver jubilee) of its canonical establishment on June 25, 2008. Having grown into being one of the most prosperous and stable local churches in the Philippines, the diocese commits itself to a communitarian life of thanksgiving, celebration and evangelization - thus the theme of its silver jubilee celebration, "25 Taon ng Mabuting Paglalakbay: Pagpapasalamat, Pagdiriwang at Panibagong Pagsasabuhay!" (25 Years of a Good Voyage: Thanksgiving, Celebration and Renewed Living!).

As part of the jubilee celebration, a Diocesan Pastoral Assembly is being planned in 2009. A special Mass will be held on its anniversary in June 24, 2008. The pilgrim image of Our Lady of Antipolo (the Virgin of Peace and Good Voyage) will visit all the parishes of the diocese starting on the last week of April. The image will first visit the parish of St. Gabriel the Archangel in Malaya, Pililla, Rizal. On December 5, 2008, a big celebration is being planned at the Ynares Center in Antipolo City with the attendance of the Most Rev. Edward Joseph Adams, D.D., the Apostolic Nuncio to the Philippines.

Also, the establishment of the John Paul II Minor Seminary along Maguey Road in Brgy. San Luis in Antipolo City stands as a testament of the response of the diocese in promoting more vocations to the priesthood to serve its flock.