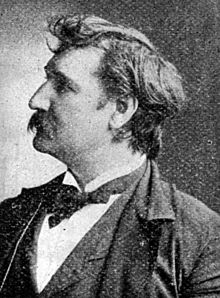 Prior to 1887, Opie Read edited five separate newspapers, all in the U.S. South: the Statesville Argus (KY), the Bowling Green (KY) Pantograph, the Louisville Courier-Journal, the Little Rock (AR) Evening Post, and the Little Rock Gazette, ancestor of the Arkansas Democrat-Gazette. In 1882, Read founded his own humor magazine, the Arkansas Traveler, which he carried on after leaving newspaper journalism in 1887.

Read brought the Arkansas Traveler, a flowing pen, and a command of Southern dialect to Chicago in 1887. He would spend the remainder of his life in the Northern city. 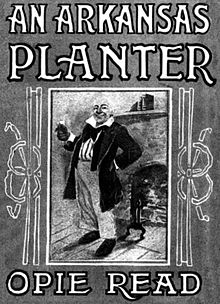 Frontispiece of An Arkansas Planter by Opie Read

Read's bibliography shows that in his first 20 full years in Chicago (1888-1908) he published 54 separate books, of which 31 were novels, 18 were book-length compilations of short fiction such as that published in the Arkansas Traveler, and five were works of non-fiction.

As a novelist, Read is credited with bringing the phrase "There's a sucker born every minute" into print in his 1898 novel A Yankee from the West[1], although the phrase seems to have been in verbal use before this and is often credited to P.T. Barnum.

After 1908, Read appears to have gone into semi-retirement. His authorial productivity noticeably slackened during the thirty remaining years of his life, although he did publish six additional books (two of them juveniles).

Read's works carried titles like A Kentucky Colonel (1890) and Opie Read in the Ozarks: Including Many of the Rich, Rare, Quaint, Eccentric, Ignorant and Superstitious Sayings of the Natives of Missouri and Arkansaw (1905).

Many later critics have dismissed Read as a presenter of lower-class white Southern stereotypes for middle-class Northerners.

In 1991-1992, advance workers for the presidential campaign of Governor of Arkansas Bill Clinton called themselves "Arkansas travelers."