Yuin people (aka Thurga) are those Australian Aborigines from the South Coast of New South wales who are considered to be the traditional owners of the land and water from Merimbula to Port Jackson.[1]

All Yuin people share in common, ancestors who spoke as their first preferred language, one or more of the Yuin language dialects, including Djiringanj, Thaua, Walbanga, or Wandandian.

The country the Yuin ancestors occupied, used, and enjoyed reached across from Cape Howe to the Shoalhaven River and inland to the Great Dividing Range.

The population before 1788 has been estimated at about 11 000 between Cape Howe and Batemans Bay. The population was reduced to only 600 by the mid nineteenth century due to smallpox epidemics in 1789 and 1830, as well as tribal battles and the spread of venereal disease from whalers.[1]

The Eurobodalla Shire Council signed a Local Agreement with the Yuin people in 1998. In 2001, a Memorandum of Understanding was signed between the Bega, Eden and Merrimans Local Aboriginal Land Councils, the Native Title Holders and the Bega Valley Shire Council. [3] 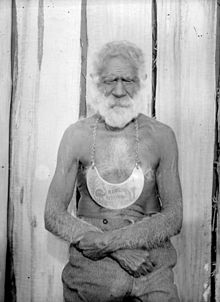 Merriman Island in Wallaga Lake is a sacred place for the Yuin people. On 25 November 1977, it was the first place in New South Wales to be declared an Aboriginal Heritage site by the New South Wales National Parks and Wildlife Service (NPWS). The island was named after King Merriman, leader of the Yuin, who died in 1904. His Aboriginal name was Umbarra. His wife was Queen Narelle.

Mumbulla Mountain, located in the middle of Bega Valley Shire, was named in November 1973, after Jack Mumbulla, who was a senior man of the Yuin people.[5] Mumbulla Mountain is the central place of significance in Biamanga National Park. Certain areas have been recognised as a ceremonial meeting places for Aboriginal men and women.[6]

Mount Dromedary, recently renamed Gulaga Mountain, in the Gulaga National Park, is described by Aboriginal people as the place of ancestral origin for Yuin people. Gulaga itself symbolises the mother and provides a basis for Aboriginal spiritual identity, for Aboriginal women and men.[6]

On 6 May 2006 the freehold titles to Gulaga and Biamanga National Parks were handed back to the Yuin people by the New South Wales Government. Freehold title of Gulaga National Park will be held in trust for the aboriginal owners by Merrimans and Wagonga Local Aboriginal Lands Councils, while that of Biamanga will be held in trust by Merrimans and Bega Local Aboriginal Lands Councils.[7]

Montague Island is known to the Yuin people as Barranguba. Barranguba is regarded as being the son of Gulaga, along with Najanuga; Barranguba being the oldest son and allowed out to sea, whereas Najanuga had to stay close to his mother.[8]