Cutoff frequency
This article is about signal processing. For other uses, see Cutoff (disambiguation). 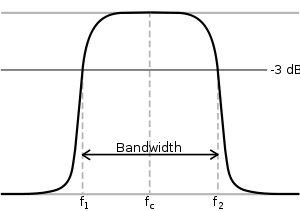 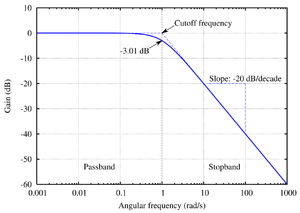 A bode plot of the Butterworth filter's frequency response, with corner frequency labeled. (The slope −20 dB per decade also equals −6 dB per octave.)

In physics and electrical engineering, a cutoff frequency, corner frequency, or break frequency is a boundary in a system's frequency response at which energy flowing through the system begins to be reduced (attenuated or reflected) rather than passing through.

Typically in electronic systems such as filters and communication channels, cutoff frequency applies to an edge in a lowpass, highpass, bandpass, or band-stop characteristic – a frequency characterizing a boundary between a passband and a stopband. It is sometimes taken to be the point in the filter response where a transition band and passband meet, for example as defined by a 3 dB corner, a frequency for which the output of the circuit is −3 dB of the nominal passband value. Alternatively, a stopband corner frequency may be specified as a point where a transition band and a stopband meet: a frequency for which the attenuation is larger than the required stopband attenuation, which for example may be 30 dB or 100 dB.

In the case of a waveguide or an antenna, the cutoff frequencies correspond to the lower and upper cutoff wavelengths.

Cutoff frequency can also refer to the plasma frequency.

In electronics, cutoff frequency or corner frequency is the frequency either above or below which the power output of a circuit, such as a line, amplifier, or electronic filter has fallen to a given proportion of the power in the passband. Most frequently this proportion is one half the passband power, also referred to as the 3 dB point since a fall of 3 dB corresponds approximately to half power. As a voltage ratio this is a fall to

of the passband voltage.[1]

However, other ratios are sometimes more convenient. For instance, in the case of the Chebyshev filter it is usual to define the cutoff frequency as the point after the last peak in the frequency response at which the level has fallen to the design value of the passband ripple. The amount of ripple in this class of filter can be set by the designer to any desired value, hence the ratio used could be any value.[2]

In communications, the term cutoff frequency can mean the frequency below which a radio wave fails to penetrate a layer of the ionosphere at the incidence angle required for transmission between two specified points by reflection from the layer.

For a rectangular waveguide, the cutoff frequency is

are the mode numbers and a and b the lengths of the sides of the rectangle.

where r is the radius of the waveguide, and χ01 is the first root of J0(r), the bessel function of the first kind of order 1.

For a single-mode optical fiber, the cutoff wavelength is the wavelength at which the normalized frequency is approximately equal to 2.405.

The starting point is the wave equation (which is derived from the Maxwell equations),

The function ψ here refers to whichever field (the electric field or the magnetic field) has no vector component in the longitudinal direction - the "transverse" field. It is a property of all the eigenmodes of the electromagnetic waveguide that at least one of the two fields is transverse. The z axis is defined to be along the axis of the waveguide.

where kz is the longitudinal wavenumber, resulting in

where subscript T indicates a 2-dimensional transverse Laplacian. The final step depends on the geometry of the waveguide. The easiest geometry to solve is the rectangular waveguide. In that case the remainder of the Laplacian can be evaluated to its characteristic equation by considering solutions of the form

Thus for the rectangular guide the Laplacian is evaluated, and we arrive at

The transverse wavenumbers can be specified from the standing wave boundary conditions for a rectangular geometry crossection with dimensions a and b:

where n and m are the two integers representing a specific eigenmode. Performing the final substitution, we obtain

which is the dispersion relation in the rectangular waveguide. The cutoff frequency ωc is the critical frequency between propagation and attenuation, which corresponds to the frequency at which the longitudinal wavenumber kz is zero. It is given by

The wave equations are also valid below the cutoff frequency, where the longitudinal wave number is imaginary. In this case, the field decays exponentially along the waveguide axis.