Easily Abbey's most famous fiction work, the novel concerns the use of sabotage to protest environmentally damaging activities in the American Southwest, and was so influential that the term "monkeywrench" has come to mean, besides sabotage and damage to machines, any sabotage, activism, law-making, or law-breaking to preserve wilderness, wild spaces and ecosystems.

In 1985, Dream Garden Press released a special 10th Anniversary edition of the book featuring illustrations by R. Crumb, plus a chapter titled "Seldom Seen at Home" that had been deleted from the original edition.[1] Crumb's illustrations were used for a limited-edition calendar based on the book.[2] The most recent edition was released in 2006 by Harper Perennial Modern Classics.

The book's four main characters are ecologically-minded misfits — "Seldom Seen" Smith, a Jack Mormon river guide, Doc Sarvis, an odd but wealthy and wise surgeon, Bonnie Abbzug, his young sexualized female assistant, and a rather eccentric Green Beret Vietnam veteran, George Hayduke. Together, though not always working as a tightly-knit team, they form the titular group dedicated to the destruction of what they see as the system that pollutes and destroys their environments, the American West. As their attacks on deserted bulldozers and trains continue, the law closes in. 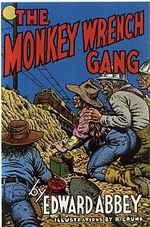 The book was praised for its erudition, flair, down-home wit, and the accuracy of its descriptions of life away from civilization. Abbey made the West his home and was a skilled outdoorsman.

From a 21st-century viewpoint, the Gang in some ways bears little resemblance to the modern media's portrayal of environmentalists — the book's characters eat a lot of red meat, own firearms, litter the roadside with empty beer cans and drive big cars. (Abbey's habits were reportedly similar.) Abbey's politics are not "bleeding heart", and most of the characters dismiss liberalism: they attack American Indians as well as whites for their consumerism, and hold little regard for the Sierra Club. (Despite occasional contradictory evidence, Edward Abbey considered himself a liberal--"I'm a liberal, and proud of it," he wrote in Abbeys' Road.)

For the Gang, the enemy is those who would develop the US Southwest — despoiling the land, befouling the air, and destroying Nature and the sacred purity of Abbey's desert world. Their greatest hatred is focused on the Glen Canyon Dam, a monolithic edifice of concrete that dams a beautiful, wild river, and which the monkeywrenchers seek to destroy. One of the book's most memorable passages describes Abbey's character Seldom Seen Smith, as he kneels atop the dam praying for a "pre-cision earthquake" to remove the "temporary plug" of the Colorado River.

The book may have been the inspiration for Dave Foreman's and Mike Roselle's creation of Earth First!, a direct action environmental organization that often advocates much of the minor vandalism depicted in the book. Many scenes of vandalism and ecologically-motivated mayhem, including a billboard burning at the beginning of the book and the use of caltrops to elude pursuing police, are presented in sufficient detail as to form a skeletal how-to for would-be saboteurs. This has influenced the Earth Liberation Front.

A film adaptation of the book, to be directed by Catherine Hardwicke, and written by William Goldman, is being planned.[3]