Thirsk is a small market town and civil parish in the Hambleton district of North Yorkshire, England. The local travel links are located a mile from the town centre to Thirsk railway station and 20 miles (32 km) to Durham Tees Valley Airport. Local bus services to and from York, Ripon and Northallerton and nearby villages and long distance National Express Coaches call at the bus stop in the market place. Also, the main road running through the town is the A61, connecting Thirsk to Ripon. The parish has a population of 4,703 according to the 2001 Census.[1] 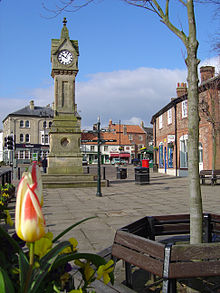 The town lies in the Vale of Mowbray, 23 miles (37 km) north of York. Cod Beck runs through the centre of Thirsk - the area to the east of the river is called Old Thirsk. The A19 road now, after a bypass was built in the 1960s, passes Thirsk to the east; the former route of the A19 through the town is the A61 to the north to South Kilvington and the A170 to the south at the junction where the A19 joins the original route to the south.

The town is mentioned in the Domesday Book of 1089 as Tresche, derived from the Viking (Old Norse) word þresk = "marsh". It is surrounded by a number of villages also having names of Danish origin, such as Thirlby, Boltby, Borrowby and Sowerby (the -by suffix (Danish in origin) meaning village or farmstead).

Thirsk is built around a large medieval market square, which still hosts an open-air market each Monday and Saturday. Thirsk has a museum and the 15th century church of St Mary's. It is commonly thought that Thirsk also has a hospital, cinema, town hall and swimming pool, but all are actually in the adjoining village of Sowerby.

Thirsk's chief modern claim to fame is as the home of the veterinary surgeon and author James Herriot,[2] although it was renamed "Darrowby" in the books. The veterinary practice at 23 Kirkgate, in which he was a partner along with Donald Sinclair (Siegfried Farnon in the books) now houses a museum dedicated to his life and works, The World of James Herriot.[3]

Thomas Lord, another Thirsk notable, who founded Lord's cricket ground in London was born in a house which now houses the Thirsk Museum, also on Kirkgate. Another local attraction is the Kilburn White Horse, a chalk horse carved into the hillside about four miles (6 km) east of the town in 1857.

The Ritz Cinema on Westgate, Sowerby is a small 200 seat (100 stalls, 100 balcony) cinema run by volunteers. It dates back to 1912 and is one of Britain's oldest operating cinemas.[4] It shows in a period setting most of the current films and is run for residents and visitors to Thirsk and the local villages by a dedicated team of volunteers.

The racecourse at Thirsk is a leading venue for horseracing on the flat in the spring and summer months.

The market square adjacent to the clock tower was featured in the artwork to Pulps 1995 album "Different Class".