A countdown is a sequence of counting backward to indicate the seconds, days, or other time units remaining before an event occurs or a deadline expires. Typical events for which a countdown is used include the launch of a rocket or spacecraft, the detonation of a bomb, the start of a race, and the start of the New Year. In an early attestation of a countdown, it started a rowing race at Cambridge University.[1] The first known association with rockets was in the 1929 German science fiction movie Die Frau im Mond by Fritz Lang to increase the drama of the launch sequence of the story's lunar rocket.[2]

A countdown is a carefully devised set of procedures ending with the ignition of a rocket's engine. Depending on the type of vehicle used, countdowns can start from 72 to 96 hours before launch time.

The procedures for each launch are written carefully. For the Space Shuttle, a five-volume set, Shuttle Countdown (KSC S0007), often referred to as "S0007", is used. Rosie Carver, a technical writer for United Launch Alliance, has created at least 15,000 procedures for more than 300 missions since the Solar Maximum Mission, which launched Feb. 14, 1980. These documents are living documents, which reflect new issues and solutions as they develop. Each mission requires approximately 100 procedure books.[4]

Proceeding with the countdown depends on several factors, such as the proper launch window, weather that permits a safe launch, and the rocket and payload working properly.

The launch weather guidelines involving the Space Shuttle and expendable rockets are similar in many areas, but a distinction is made for the individual characteristics of each. The criteria are broadly conservative and assure avoidance of possibly adverse conditions. They are reviewed for each launch. For the Space Shuttle, weather "outlooks" provided by the U. S. Air Force Range Weather Operations Facility at Cape Canaveral begin at Launch minus 5 days in coordination with the NOAA National Weather Service Spaceflight Meteorology Group at the Johnson Space Center in Houston. These include weather trends and their possible effects on launch day. A formal prelaunch weather briefing is held on Launch minus 1 day, which is a specific weather briefing for all areas of Space Shuttle launch operations.[5]

The launch window is a precise time during which aerospace personnel launch a rocket so the payload can reach the proper orbital destination.[6]

A hold is the suspension of the normal countdown process. This can be done to investigate a technical process that has gone wrong, or because of marginal weather at the launch pad.

Some holds are planned: they are done so the launch-support computers can run automatic checks on the rocket.

Under some circumstances, a countdown may be recycled to an earlier time. When that happens, launch personnel begin following the countdown checklist from the earlier point.[7]

During communications for a countdown, the launch team uses acronyms to keep channels open as much as possible. All Firing Room console positions are assigned unique 'call signs' that are used by the team for quick and positive identification of who is talking.[8] For example, dialogue heard during the launch of a Delta II rocket carrying the Kepler Space Telescope on March 8, 2009, included: 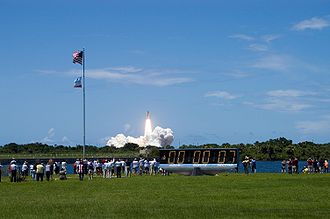 Seven seconds after launch of STS-121, the countdown clock at LC-39 at the Kennedy Space Center seen counting up, rather than down.

In Fritz Lang's film Frau im Mond, after each number the phrase "seconds to go" was repeated.

When counting down to the launch of an explosive, e.g. when testing a new model of gun, it is customary to omit "5" from the countdown sequence because "five" sounds too similar to 'Fire!'.[citation needed]

At the start of films, a countdown sequence is printed on the head leader, to aid in synchronizing the film. In film (but not television) the countdown is in units of feet rather than time units.

The countdown ends just as "two" is displayed so that the countdown isn't shown if the film is put on screen a little earlier than intended. Although this sequence was usually not intended for broadcast, being a cue device for a projectionist or TV producer, it is sometimes used in modern-day spoofs to signify old film footage.

In many New Year's Eve celebrations, there is a countdown during the last seconds of the old year until the beginning of the new year. In Times Square on New Year's Eve, besides the 60-Second Toshiba Countdown, there are six hourly countdowns in which people can practice their countdown skills from 6 P.M. to 11 P.M. Additionally, countdowns are often used to count down the days before special events, such as major holidays like Chinese New Year, Christmas, and important town meetings. Sometimes personal countdowns may be used, via phone or computer applications, to count the days to one's birthday or anniversary.