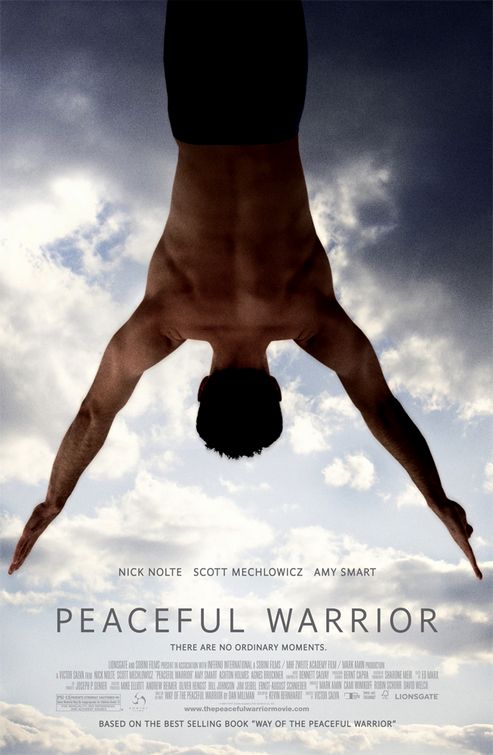 image_size = 200
caption = Promotional movie poster for the film
director =
producer =
writer = Kevin Bernhardt, based on the novel "Way of the Peaceful Warrior" by
narrator =
starring =

"Peaceful Warrior" is a 2006 American film, starring , and . Released on , , it is based on the novel "" by . Director first became familiar with the work while in prison for , and he credits it with being "a story that changed my life." [http://www.latimes.com/entertainment/news/la-ca-salva11jun11,1,1760527.column?coll=la-news-columns "'Powder' Director, Convicted Molester, Returns from the Brink", Patrick Goldstein, the , published , , accessed , .]

The film takes place at , and features a troubled, but talented gymnast (Mechlowicz) who meets a spiritual guide (Nolte).

At the beginning of the plot, Dan Millman is a university student as well as a locally famous gymnast who dreams of winning an National Championship competition. He sexually couples with numerous young women who are impressed by his agility and skill, and suffers from psychological restlessness. On one occasion, Dan attempts to compensate for the restlessness by running along streets before sunrise. At a car-service station, he encounters an old man who seems to know more about Dan's problem than Dan himself knows, whom Dan later nicknames "Socrates." Dan is unsettled by Socrates' knowledge; by the fact that Socrates had appeared in a nightmare as a faceless janitor, clad in mismatched shoes (by which he is identified in waking life), who sweeps up the pieces of Dan's shattered leg; and by the old man's extraordinary speed, agility, and co-ordination. As a result of his exposure to the last, Dan seeks to learn the secret behind it.

Socrates, prodded by the impatient and defiant Dan, gives the boy a series of tasks and lessons. The central concept of "Soc"'s philosophy is this: that one must live entirely in the present moment. Other ideas include the related notion that at no time is "nothing going on" and the idea that an appropriate time exists for fighting and another for abstaining from violence. These lessons are conveyed through practical lessons, long contemplation, and one spectacular mystical experience. Dan gradually learns to appreciate every moment; to view the journey toward a goal as more meaningful and significant than the attainment; to pay attention to that which he is doing – thus increasing his gymnastic prowess; and (to a slightly lesser extent) control himself. Throughout the lesson, Dan learns virtually nothing about his mentor, other than the philosophy, Socrates' belief that service is the most noble action possible (hence his choice to work as a car serviceman), and the presence of another protegé.

This protegé, a woman of Dan's own age named Joy, has learned and integrated Socrates' philosophy into her life, to the extent that she seems as wise as Socrates himself. Dan attempts to ask her for information regarding Socrates, but receives little. Joy treats Dan indulgently, though she evidently respects him. She is very compassionate and does not attempt at any point to seduce or be seduced by Dan.

One day, Dan drives recklessly, runs a red light, and his motorcycle collides with a car, causing his right bone to shatter. He is rushed to a hospital, where a metal bar is placed in his leg to maintain its integrity. As a result, his gymnastic coach stops believing that Dan can compete in the National competition. Dan, hurt by this lack of faith, recovers from the injury and resumes his training under Socrates' tutelage. Eventually, he is restored to full health and strength, while his co-ordination improves and his mind is set entirely on the present moment. He competes in the U.S. Trials for the Olympics and achieves a victory.

Slightly before the competition, Dan diverts the bus he is riding to Socrates' station, only to find that Socrates has vanished without a trace. At the arena, he attempts to teach another student that which he has learned, but fails due to the other's emotional insecurity and lack of comprehension.It is implied at the end, in a postscript appearing on screen, that Dan of the film and Dan the author of the book on which the film is based are one and the same. It is also stated that the latter Dan lives with his wife Joy.

- Paradox: Life is a mystery; don't waste time figuring it out.

- Humor: Keep a sense of humour, especially about yourself. It is a strength beyond all measure

- Change: Know that nothing stays the same."

2. "There is never nothing going on. There are no ordinary moments."

3. "When you feel fear. Use the sword, take it up here and cut the mind to ribbons, slash through all those regrets and fears, anything else that lives in past or the future"

4. "Take out the trash from what's inside your head."

5. "A warrior is not about perfection or victory or invulnerability. He's about absolute vulnerability. That is the only true courage."

6. "There is no starting or stopping - only doing."

7. "There's no greater purpose than service to others."

8. "Everyone wants to tell you what to do and what's good for you. They don't want you to find your own answers, they want you to believe theirs."

9. "I want you to stop gathering information from the outside and start gathering it from the inside."

10. "People are not their thoughts, they think they are, and it brings them all kinds of sadness."

12. "Knowledge is knowing, Wisdom is doing."

14."It is the journey that gives us happiness, not the destination"

It was reported , that gave away $15 million worth of free tickets for the opening March 30th weekend. [ [http://newsmax.com/archives/articles/2007/3/14/103224.shtml Universal Giving Away $15 Million in Movie Tickets ] ] [ [http://www.thepeacefulwarriormovie.com/freewarrior/ Peaceful Warrior DVD - Own It Now On DVD - Official Movie Website ] ]