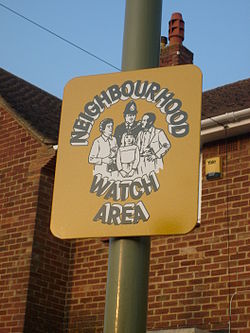 A British Neighbourhood Watch sign affixed to a lamppost.

The Neighbourhood Watch scheme in the United Kingdom is a partnership where people come together to make their communities safer. It involves the Police, Community Safety departments of local authorities, other voluntary organisations and, above all, individuals and families who want to make their neighbourhoods better places to live. It aims to help people protect themselves and their properties and to reduce the fear of crime by means of improved home security, greater vigilance, accurate reporting of suspicious incidents to the police and by fostering a community spirit.

The UK's first Neighbourhood Watch was set up in Mollington in Cheshire in 1982 following the success of a similar scheme in Chicago in the United States. Many more schemes followed throughout the UK, and 10 million [1] [2] people are now claimed to be members.

The neighbourhood watch schemes covers many aspects of criminal behaviour.

Schemes can vary in size. A volunteer resident Co-ordinator supervises the scheme and liaises with the Police, they receive information and messages to keep them in touch with activities, and some have marker kits, alarms and other security items, which are available to members. It must be recognised that the scheme is a community initiative, which is supported by the police, not run by them, so success depends on what the members make of it.

The Police can't deal with the problems and issues arising from crime and anti-social behaviour alone; they need the help of the whole community. Neighbourhood Watch provides a way for local people to play an important part in addressing this balance and making their communities safer. 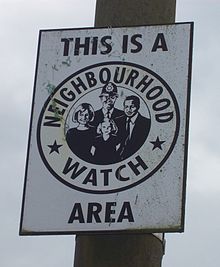 These are the main tasks which would be expected of a co-ordinator, tasks will vary according to the needs of each individual neighbourhood.

Some larger communities will also appoint Area and/or Ward Coordinators forming a hierarchy who sit above other coordinators. The roles of the Ward and Area coordinators are not necessarily authoritative (may vary around the country), but they provide structure and cohesion for larger and more active watch schemes. These are typically more active roles to assist the other coordinators, organising coordinator meetings and neighbourhood meetings as well as being an extra link to the local Police. Like all other coordinators these roles are completely voluntary and therefore unpaid.

Most of these senior roles are taken by people who are in their 50's, 60's and 70's. Although they bring experience and maturity to Neighbourhood Watch some may identify it as a weakness as there is a lack of participation from younger generations.

Neighbourhood Watch schemes have not been universally welcomed. Criticisms include: