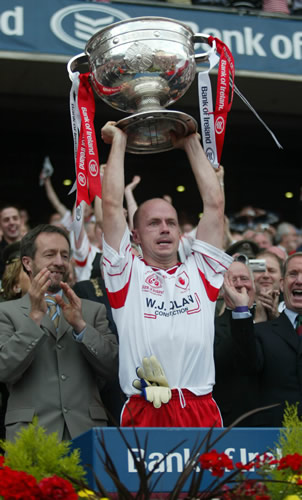 Peter Canavan (born 9 April 1971) is a former player for Tyrone, and is one of the most decorated players in the game's history. He represented Ireland in the on several occasions from 1998 until 2000.

After sixteen years on the senior inter-county scene, and with two All-Ireland Senior Championship Medals, six All Stars (more than any other Ulster player, and joint third overall), [cite web | url= http://www.unison.ie/irish_independent/stories.php3?ca=37&si=1514357&issue_id=13331 | title = Big three sweep awards boards | accessdate=2007-01-25 | date= | author = Martin Breheny | publisher= " Online"] four Ulster titles, and several under-age and club championship medals to his name, he is considered one of the great players of the last twenty years by commentators such as John Haughey of the .

His scoring record of 218 points is the second highest of all time in the .

Canavan was the tenth of eleven children.

In 2003, just over a week before Tyrone's Ulster final appearance against Down, Canavan's father, Seán, died. It came as a shock to Canavan, who had thought his father (who was already in hospital) was getting better. He decided to play in the match, stating that he knew, subconsciously " [he] was going to be playing in the Ulster final all along and Daddy certainly wouldn't have wanted [him] to do anything but play." [cite book | first=Peter | last=Canavan | title=Every Step We Took. 2003 - A Football Odyssey | publisher=All Star Print Ltd. | location=Omagh, Northern Ireland | year=2004 | pages = 46 | id=ISBN 0-9546616-0-5]

Canavan has suffered from since he was a child, and has battled throughout his career to control the ailment. He told the Asthma Society of Ireland, "I thought to myself, this is something that I am just going to have to put up with." In later years, however, improved medication has afforded Canavan what he described as, "a better quality of life". [cite web |url= http://www.irishhealth.com/clin/asthma/canavan.html |title=Peter Canavan - Life With Asthma |accessdate=2007-01-25 | publisher = irishhealth.com]

In order to play for an inter-county GAA team, Canavan had to work around a (GAA) bylaw, due to a dispute in his , . Two clubs claimed to represent the parish, the established Ballygawley St. Ciaran's club and the newly-formed club, then called Errigal Ciaran Naomh Malachai. Players from the Errigal team were not recognised as being GAA members, because the club failed to register correctly. Canavan registered as a member of the Killyclogher club, even though he didn't play the sport, just so he would be eligible for selection for the Tyrone minors. Prior to that, he had not played legitimate club football, but had forged his way onto the Tyrone under-age teams with his performances at school level. The two clubs united under the banner of Errigal Ciaran two years later.

Canavan's name was already known around Tyrone because of his exploits for the U-21 team, but he started to make an impact in the in 1994. He was the top scorer in Ulster, earning him his first All Star, at the age of 23.

Throughout the 1995 championship, Canavan had spearheaded Tyrone's march to the final, with round after round of massive scoring exploits. Against Derry in the Ulster Semi-Final, he scored 0&ndash;8, and against Galway in the All-Ireland semi-final, he scored 1&ndash;7. [cite web | url= http://www.culturenorthernireland.org/article.aspx?county=0&articleID=1304&cultID=0&townID=0&cultSubID=0&page=0&navID=0 | title =The Artful Manager |accessdate= 2007-05-10 | date= | publisher = Culture Northern Ireland] He scored eleven of Tyrone's twelve points in the All-Ireland Final, despite ending up on the losing side to Dublin. The game was remembered as contentious for Tyrone fans, for the fact that a point that would have equalised the match in the dying seconds was controversially disallowed, because the blind-sided referee deemed Canavan to have touched the ball on the ground.

Canavan represented Ireland in the inaugural in 1998 against Australia. In 1999, he was named vice-captain of the team for the tour to Australia, and Ireland came away convincing winners, with Canavan scoring eleven points in the first test in , .

Canavan's influence may be best illustrated by Tyrone's 2002 campaign. Whenever he was on the pitch, the team seemed like All-Ireland title contenders, but he was unable to play in the All-Ireland quarter final, against Sligo. Tyrone were heavy favourites, but ended up losing the match.Canavan won his fourth All Star that year, the only Tyrone player to do so, which may go some way to emphasizing the value of his presence on the team. This also made him Tyrone's most represented player on the All Star Roll of Honour, overtaking , his manager at the time. [ citation | url = http://www.hoganstand.com/Tyrone/Profile.aspx | title= Tyrone Profile | accessdate = 2007-05-17 | publisher = Hogan Stand]

In 2003, Peter 'The Great' finally shook off his tag as 'the greatest player never to win an All-Ireland', captaining Tyrone to All-Ireland glory against neighbouring rivals, Armagh. As he approached the podium on the Hogan Stand, his nervousness was visible, and after being handed the trophy, he made an emotional speech about how he had to watch other Ulster teams lift the , but "to eventually win it is something else." [citation | url = http://news.bbc.co.uk/sport2/low/northern_ireland/gaelic_games/3147218.stm | title= Tyrone are All-Ireland champions | accessdate = 2007-05-17 | publisher ="" | date = ]

Canavan amassed a total of 1&ndash;48 (51 points) over the course of the Championship.

His appearance in the final was remarkable for the fact that he was the top scorer of the day with five points, despite having suffered an ankle injury in the previous match, and was not expected (or advised) to play. He started the match and was taken off before half time. During the break, and even some way into the second half, he was receiving treatment to his ankle, including pain-killing injections.
With seven minutes remaining, he was reintroduced by manager , a shrewd&mdash;albeit necessary&mdash;move, considering Canavan was the only member of the team who had played in an All-Ireland final before. This reintroduction, while not the first time it had happened (blood substitutions had been used sporadically, for example), was seen as one of the greatest moments in the GAA in the last forty years, [citation | url = http://www.theharpnews.com/issues/april_05/irish_gaa.html | title = Magic Moments to Mark The Start of a New Championship | author = Aidan Begley | publisher = The Harp | date = April 2005 | accessdate = ] a tribute to both the player's legacy and inspiration, and the manager's tactical superiority.

Canavan was voted Northern Ireland Sports Personality of the Year, [cite web| url= http://news.bbc.co.uk/sport1/low/northern_ireland/3297059.stm | title=Canavan wins BBC award| accessdate=2007-01-25 | date = | publisher ""] which is a regional award of the . Following an email campaign throughout Ireland, Canavan was a surprising early forerunner for the national award, despite the fact that Gaelic games have very little exposure in .

Canavan relinquished his captaincy to the late after the 2003 Championship, and had been used mostly as an 'impact substitute' throughout the year in 2005&mdash;brought on to either unsettle the opposition, or rally his teammates.

His fiery temperament was displayed early in the year, when he was notoriously sent off within a minute of coming on as a substitute in the Ulster Final replay replay against Armagh. [cite web| url= http://www.rte.ie/sport/2005/0723/armagh.html | title=Armagh take Ulster title in scrappy affair|accessdate=2007-03-04 | publisher = " Sport" | date = ] This decision was highly criticised and the referee later admitted he had made a mistake with the sending off. [cite web| url= http://hoganstand.com/ArticleForm.aspx?ID=49241 | title=Collins admits red card error| accessdate=2007-01-25 | publisher =""| date=]

He also displayed how important his experience was to the team in the semi-final against Armagh (who were meeting Tyrone for the third time that year), when, after a very taut match, the two well-matched teams were heading for a draw. Tyrone won a free kick in the last seconds, and Canavan, a substitution, took the responsibility of the pressure kick and slotted the ball over the bar in the last kick of the game, winning the match for Tyrone. [cite web| url= http://news.bbc.co.uk/sport1/low/northern_ireland/gaelic_games/4213594.stm | title= Armagh 1-12 1-13 Tyrone ALL-IRELAND SEMI-FINAL| accessdate=2007-01-25 | date = | publisher = ""] Kevin McStay, a former Mayo player, described it as the point of the season, despite the kick being from a relatively straightforward position. [cite web| url= http://www.hoganstand.com/ArticleForm.aspx?ID=54858 | title=KEVIN McSTAY COLUMN | date= 21 December 2005| accessdate=2007-04-02 | publisher =""]

] He received a pass from Eoin Mulligan on the edge of the area, and drilled a low shot past two Kerry defenders and the goalkeeper.

Canavan was part of both Tyrone sides that won the National Football League title two years in a row&mdash;in 2002 and 2003&mdash;and he competed in the 1992 final against Derry. His success in other competitions include five s, two Vocational Schools titles, and one .

In 2003, Canavan became the first GAA star to gain an honorary doctorate from the , which he was awarded along with David Humphreys, the Ulster and Ireland rugby player.

Canavan won three consecutive GAA All Star awards from 1994 through 1996 and the Player of the Year award in 1995. He also received three GAA All-star awards in the 2000s. One in 2002 and another in 2003, the year of his first All-Ireland win. He then went on to win his final Gaelic Athletic Association All Star in 2005, before his inter-county retirement.

A particularly notorious incident took place after a club match in 1989, in which Canavan had suffered a broken jaw. In what appeared to be a dressing room brawl after the match had finished, the alleged perpetrator received bad facial injuries. It is unclear as to what involvement, if any, Canavan had in the brawl, but his name is often connected with the incident.

However, this indiscipline could not be said to have always been at his instigation, as he was usually singled out for the attention of the tougher tacklers of opposition teams because of his skill. [cite web| url = http://www.the-kingdom.ie/news/story.asp?j=10521 | title=Kerry team filled tanks with negativity before big game| accessdate=2007-03-04 |date = | publisher = the-kingdom.ie | author= Aidan Kilpatrick] [cite web | url = http://news.bbc.co.uk/sport1/hi/bbc_pundits/1564155.stm | title= My end of season awards | accessdate = 2007-05-05 | author = Jerome Quinn | publisher = "" | date = ]

* [http://www.hoganstand.com/Tyrone/ArticleForm.aspx?ID=50132 Hoganstand GAA Immortals]
* [http://tyrone.gaa.ie/ Official Tyrone Website]
* [http://www.gaelsport.com/html/club/club_home.jsp?c=586 Errigal Ciarán Official Website]
* [http://www.teamtalkmag.com/2003/county/senior-championship/tyrone-player-profiles.htm#Peter%20Canavan Brief biography of Canavan along with all the other Tyrone players following their win over Down in the Ulster final in 2003]
* [http://www.culturenorthernireland.org/article.aspx?co=14&ca=15&to=0&sca=0&articleID=641&navID=10 Culture Northern Ireland Bio]