The Dual Contracts of 1913, also known as the Dual Subway System, were contracts for the construction and/or rehabilitation and operation of rapid transit lines in the City of New York. The majority of the lines of the present-day New York Subway were built or reconstructed under these contracts. The contracts were "dual," in that they were signed between the City and two separate private companies.

Under the terms of Contracts 3 and 4, the city would build new subway and elevated lines, and rehabilitate and expand certain existing elevated lines, and lease them to the private companies for operation. The cost would be borne more-or-less equally by the City and the companies. The City's contribution was in cash raised by bond offerings, while the companies' contributions were variously by supplying cash, facilities and equipment to run the lines.

The contract negotiations were long and sometimes acrimonious. For instance, when the IRT was reluctant (if not totally opposed) to the BRT's proposed access to Midtown Manhattan via the Broadway Line, the city and state negotiators immediately offered the BRT all of the lines under proposal - including such obvious IRT tie-ins such as the upper Lexington Avenue Line, and both lines in Queens. The IRT quickly gave in to the 'invasion' of Midtown Manhattan by the BRT.

The assignment of the proposed lines in Queens proved to be an imposition on both companies. Instead of one company enjoying a monopoly in that borough, both proposed lines — a short line to Astoria, and a longer line reaching initially to Corona, and eventually to Flushing — were assigned to both companies, to be operated in what was called "joint service." The lines would start from a huge station called Queensborough Plaza. The IRT would access the station from both the 1907 Steinway Tunnel and an extension of the Second Avenue Elevated from Manhattan over the Queensborough Bridge. The BRT would feed the Queens lines from a new tunnel from 60th Street in Manhattan. Technically the line was under IRT 'ownership', but the BRT/BMT was granted trackage rights in perpetuity, essentially making it theirs also.

The BRT had a big disadvantage, as both Queens lines were built to IRT specifications. This meant that IRT passengers would have a one-seat ride to Manhattan destinations, whereas BRT passengers had to make a change at Queensborough Plaza. This came to be important when service was extended for the 1939 World's Fair, as the IRT was able to offer direct express trains from Manhattan, and the BRT was not. This practice lasted well into the municipal ownership of the lines, and was not ended until 1949. Both companies would share in the revenues from this service. To facilitate this arrangement originally, extra long platforms were constructed along both Queens routes, so separate fare controls/boarding areas could be established. This quickly turned out to be operationally unworkable, so eventually a proportionate formula was worked out. The bonus legacy of this construction was that the IRT was able to operate 11-car trains on this line, and when the BMT took over the Astoria Line, minimal work had to done to accommodate 10-car BMT units.

Several provisions were imposed on the companies, which eventually led to their downfall and consolidation into City ownership in 1940:

The following lines were built under the Dual Contracts for the IRT:

The following lines were rebuilt with extra tracks: 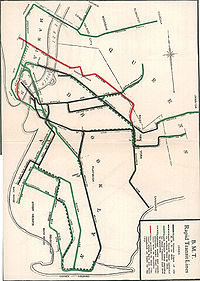 All Manhattan and Queens BMT lines were built under the Dual Contracts, as were all subway and some elevated lines in Brooklyn. 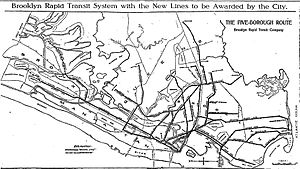 1911 plan, giving all the contracts to the BRT