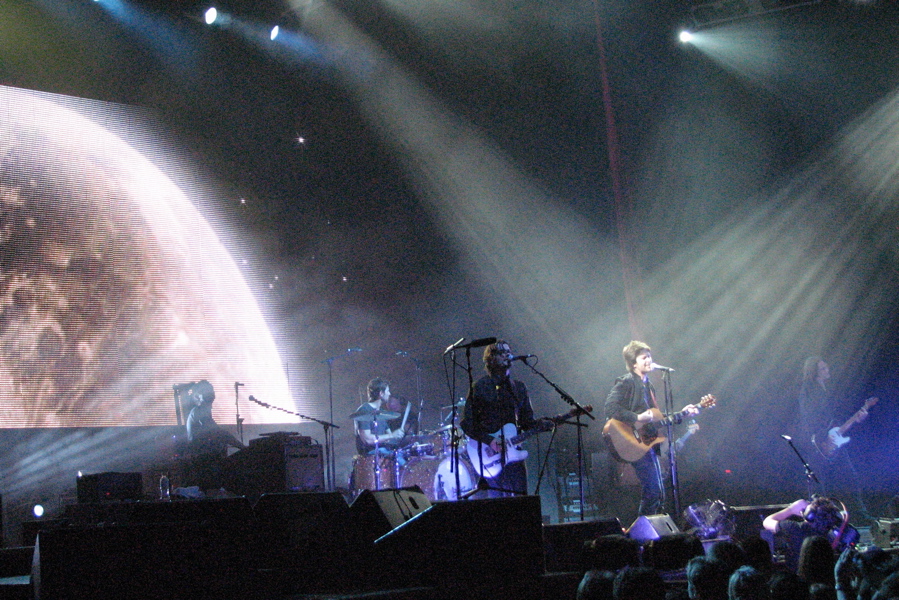 Powderfinger is an Australian . The band formed in in 1989, and since 1992 their line-up has consisted of vocalist , guitarists and , bassist John Collins, and drummer .

Powderfinger became a commercial success with their third studio album "Internationalist" in 1998. Since then they have released several hit singles and award-winning works earning them a total of fifteen ARIA Awards.

Across their sixteen year career, Powderfinger has been actively involved in philanthropic causes. In 2005, Powderfinger performed at a concert in , to help raise funds for areas affected by the . Another performance at the in October 2007 raised funds for victims and their families. The aim of their recent was to promote the efforts of , and to promote awareness of the seventeen year gap in life expectancy between Indigenous and non-Indigenous children.

Powderfinger was formed in 1989 by vocalist and guitarist Ian Haug, bassist John Collins and drummer ,

Powderfinger initially performed s of other artists' songs, but gradually developed into writing and performing their own material. Playing a show in Newcastle in 1990, Powderfinger was booed off the stage. [cite news|title=My Happiness review|author=Watson, Chad|publisher=""|date=10 August 2000|page=46] In 1992, the group self-funded a recording of their early works and released them as a self-titled , more commonly known as the "Blue EP". The EP became successful and the group was signed by . Upon its release in 1993, "Transfusion" reached the #1 spot on the Alternative , [cite news|title=Powderfinger|publisher=""|author=McPherson, Matthew|date=January 1994|accessdate=2007-10-25] replacing 's "".

Powderfinger released their debut "" under Polydor on 18 July 1994. The album, which Fanning describes as the band's "dark days," received limited radio coverage. Following the release, the band toured heavily appearing at the and s, [cite news|title=Make mine a double|author=Lawrence, Angie|accessdate=2007-10-25|year=1996|publisher="Rave"] including an appearance at one of Australia's largest music festivals, , in 1994. [cite web|url=http://www.bigdayout.com/history/pastlineups.php#1994|title=Big Day Out lineups history|publisher=|accessdate=2007-11-23] Three singles were released from the album — "Tail", "", and "". "Parables for Wooden Ears" was regarded by many as Powderfinger's worst album, and its poor reviews are indicative of this. [cite web|url=http://www.pubsandclubs.net.au/articles/index/118|title=Powderfinger: A Rock Band That Have Withstood The Test Of Time|accessdate=2007-08-01|publisher=Pubs and Clubs Australia|date=25 July 2007] Following the album's release, the group recorded and released another EP entitled "Mr Kneebone" in 1995.

The band released the highly successful "" on 2 September 1996. This, their second album, reached double platinum status in Australia.

The band received much praise and criticism for their political views on several tracks on "Internationalist". In an interview with Benedict Watts, guitarist Ian Haug said that the political messages in "" were not something they were just preaching about, but rather were something they saw as a responsibility. [cite news|title=The Beckoning Finger|date=November 1998|publisher=JUICE Magazine|accessdate=2007-10-25|author=Watts, Benedict]

Powderfinger's fourth studio album, "", was released in September 2000, shortly after they were asked to write songs for the soundtracks of two films; "Two Hands" and "". The song "These Days" was written for "Two Hands" [cite web|url=http://www.soundtrackcollector.com/catalog/soundtrackdetail.php?movieid=10528|title="Two Hands" soundtrack|publisher=Soundtrack Collector|accessdate=2007-10-26] and "" was written for "Mission: Impossible II". [cite web|url=http://www.hindleysite.com/songs/mykindascene.htm|title="My Kind of Scene"|publisher=Hindley Site|accessdate=2007-06-19] "Odyssey Number Five" was Powderfinger's most successful album to-date, selling 560,000 copies. "My Kind of Scene" was also released as a single from the album, as were "My Happiness", "", "The Metre", and "Waiting for the Sun". ["The Metre" and "Waiting for the Sun" were released as a double .] "Odyssey Number Five" won "Album of the Year", "Highest Selling Album", "Best Rock Album", "Best Cover Art", and "Best Group" at the ARIA Awards in 2001. [cite web|url=http://www.alldownunder.com/oz-p/aria/2001-aria.htm|title=2001 ARIA Award Winners|publisher=ALLdownunder.com|accessdate=2007-10-27] "My Happiness" was also awarded "Single of the Year", [cite web|url=http://www.ariaawards.com.au/history-by-year.php?year=2001|title=ARIA Awards 2001|work=History|publisher=Australian Recording Industry Association|accessdate=2007-11-12] and other songs were nominated for ARIA Awards in various other categories.

Many songs from this era of Powderfinger were ranked on 's Hottest 100 list. "These Days", "Already Gone", "Good-Day Ray", and "Passenger" were ranked in 1999,

"" was released on 4 July 2003. The album, recorded in January and February 2003, was named after a street in , which was the location of the band's first recording room. The album was described by critics as "a rawer, louder, but by no means unrefined, album", and that it featured guitarists Middleton and Haug dominating in a way they had not since their 1994 debut.

"", "Since You've Been Gone", "", and "" from "Vulture Street" were released as singles. Like earlier Powderfinger albums, "Vulture Street" won several ARIA Awards. It won "Album of the Year", "Best Group", "Best Rock Album" and "Best Cover Art" in 2003. Several songs on the album were also nominated for awards in 2003 and 2004.

' was the first live release by Powderfinger. Both the and versions were released in late-2004. One single,"" a song which originally appeared on "Vulture Street" as a normal track, was also released from the album. Powderfinger released a "" album entitled ' a few weeks later. It included many of the band's singles to-date as well as non-singles "Thrilloilogy" and "Belter" and a re-release of "These Days". "These Days", although never officially released as a single, was ranked at #1 on the Triple J Hottest 100 poll of 1999. The album also included two new songs; "" and "Process This", although only "Bless My Soul" was released as a single.

Powderfinger had a period of hiatus after the release of "Fingerprints: The Best of Powderfinger" in 2005. During that time, several band members pursued other musical projects. Darren Middleton and Ian Haug both had children during this time and Fanning married his girlfriend Andrea. [cite web|url=http://au.blogs.yahoo.com/marie-claire/1621/dream-team/|title=Dream Team|publisher=Yahoo!7|accessdate=2007-11-03|date=6 June 2007|author=Parry, Jessica]

Middleton and his side project Drag released their debut album, a follow-up to their 2002 EP "Gas Food Lodging".

On 12 June, 2007, Powderfinger and Australian rock group announced a nine-week tour titled , an effort to promote reconciliation with . The tour appeared in all state capital cities and fourteen regional centres across Australia, and included four performances in New Zealand.

In an interview with Paul Cashmere after the release of "Vulture Street", guitarist Darren Middleton stated that a couple of songs they had written "were just too "Odyssey Number Five" based," and that the first track, "Rockin' Rocks", was "probably the start of where we were heading" with the album.

Bernard Zuel of "" reviewed both of Powderfinger's more recent albums. Describing "Vulture Street" as "a rawer, louder" album in comparison to "Odyssey Number Five", Zuel highlighted Fanning's "talent as a lyricist" and stated that it featured guitarists Haug and Middleton "dominating in a way they haven't since their 1994 debut." Zuel stated that there is a "real energy here that has some connections to early Powderfinger," and described "On My Mind" as having " meatiness", and "Love Your Way" as "acoustic tumbling into weaving Zeppelin lines."

In his review of "Dream Days at the Hotel Existence", Zuel described it as " [having] high-gloss and muscular framework," and stated that that was what "American radio considers serious rock."

Clayton Bolger of stated in his review of "Dream Days at the Hotel Existence" that Powderfinger "largely revisit the sound of their "Internationalist" album, leaving behind much of the glam and swagger of 2003's "Vulture Street"."

In their time as a band, Powderfinger have been active in supporting causes or opposing actions taken in charitable, philanthropic, disaster, and political circumstances.

In 1996, decided to break up, and organised a farewell concert as a charity event for the , to be held on 24 November 1996. [cite web|url=http://wc07.allmusic.com/cg/amg.dll?p=amg&sql=10:fxfwxqtdldse|title=Farewell to the World review|publisher=Allmusic|accessdate=2007-11-12|author=Erlewine, Stephen Thomas] They approached Powderfinger and Australian acts Custard and to contribute by appearing in the concert to be held on the steps of the . [cite web|url=http://www.maxtv.com.au/Max/Artist.aspx?ID=66|publisher= [Channel V|Channel [V] |title=Crowded House Biography|work=MAX|accessdate=2007-11-07] The concert, which was recorded and later released as a live album titled "", was believed to be the largest Australian live concert, with estimates of between 100,000 and 250,000 people in attendance. [Cite book|last=Hepworth|first=David|title="Farewell to the World" CD liner notes|publisher=|year=2006]

In the wake of the 2004 Indian Ocean earthquake, also known as the "Boxing Day Tsunami", Powderfinger performed at the WaveAid fund-raising concert in Sydney in January 2005. The disaster killed more than 225,000 people from 11 countries in the area. [cite web|url=http://www.redcross.org.uk/standard.asp?id=46361|title=Boxing Day tsunami, 2004|publisher=Red Cross|accessdate=2007-11-06|date=31 May 2005] The total profit from the funds raised from ticket sales and donations was AUD$2,300,000. [cite web|url=http://www.waveaid.com.au/waveaid_profit_and_loss_statement.pdf|title=Projected profit & loss statement|publisher=WaveAid|accessdate=2007-11-06|date=15 February 2005|format=PDF]

The song "" from the album "Dream Days at the Hotel Existence" featured the lyric "An island watchhouse bed, a black man's lying dead"

The legal team for Hurley, who was charged with manslaughter over the death of in 2004, referred the song to the Attorney-General of in their attempt at altering the track.

In June 2007, Powderfinger announced a nationwide tour featuring Australian rock band titled the Across the Great Divide tour. The tour was an attempt to promote the efforts of Reconciliation Australia, a foundation helping to improve the welfare of the Indigenous people of Australia and to "show [that] both bands are behind the idea of reconciliation." [cite web|url=http://www.brisbanetimes.com.au/news/music/in-concert--rock-and-reconciliation/2007/06/12/1181414306040.html|title=In concert - rock and reconciliation|publisher=Brisbane Times|accessdate=2007-11-06|date=13 June 2007|author=Dunn, Emily] Reconciliation Australia aims to promote awareness of the 17-year difference in life expectancy between the Indigenous and non-Indigenous children of Australia. [cite web|url=http://www.studentguild.com.au/docs/TheHonk/2007/06/across-great-divide-tour.html|title=Powderfinger and Silverchair to embark on Australia's biggest national tour|publisher=University of Southern Queensland|accessdate=2007-11-25|date=13 June 2007]

Powderfinger consists of five members: ist, ist, keyboardist and harmonicist Bernard Fanning, ist John Collins, guitarist and Ian Haug, guitarist, keyboardist and backing vocalist Darren Middleton, and mer and ist Jon Coghill. This has remained the lineup of the band since 1992. Steven Bishop had been the group's drummer before this, but had left wanting to focus on his studies. The band often refers to one another with partial pseudonyms. Most notably John Collins and Jon Coghill, presumably to avoid confusion, are referred to as JC and Cogsy respectively.

Powderfinger have collaborated with few artists, but have had pianist play on "Dream Days at the Hotel Existence". [cite web|url=http://www.abc.net.au/triplej/musicnews/s1898994.htm|title=New Powderfinger album details|publisher=Australian Broadcasting Corporation|author=Triple J|accessdate=2007-10-26|date=17 April 2007] For their second album, "Double Allergic", the group enlisted producer . Powderfinger approached American expatriate as their producer for "Internationalist", and recorded with him at Sing Sing Studios in Melbourne. [cite web|url=http://www.ozmusic-central.com.au/powderfinger/discog/inter.htm|title="Internationalist"|work=Powderfinger discography|publisher=Powderfinger Central|accessdate=2007-10-25] DiDia also produced the following two albums. In 2007 , producer for , was asked to produce their sixth studio album in . [cite web|url=http://www.abc.net.au/triplej/review/album/s1932552.htm|title="Dream Days at the Hotel Existence|publisher=Australian Broadcasting Corporation|accessdate=2007-10-25|date=25 May 2007]

Powderfinger's first music video for the song "Reap What You Sow" in 1993 was directed by David Barker, an award-winning director. [cite web|url=http://www.if.com.au/News/View.aspx?newsid=430|title=Australian Directors Guild announces 2007 ADG winners|date=15 October 2007|accessdate=2007-10-19|publisher=InFilm] Film companies who directed other videos of the group include Fifty Fifty Films,