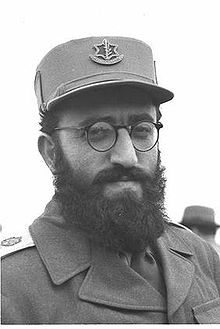 The Military Rabbinate constitutes the body responsible for religious institutions in the military. In every unit or military base there are Military Rabbinate soldiers assigned responsibility for assuring religious services, and in particular, the Kashrut of the kitchen and the maintenance of the synagogue and its inventory. Actively serving soldiers can request from the Rabbinate representatives to perform marriage ceremonies as well as the brit mila.

The Military Rabbinate is responsible for treating the bodies of soldiers from the Halakha standpoint, including the identification and post-mortem treatment of bodies, and conducting military funerals. In the past decade, the use of Integrated Automated Fingerprint Identification System was implemented, setting the IDF at the cutting edge of fingerprint identification technology[2]. The Military Rabbinate also attends to the burial of enemy soldiers and the exhuming in conjunction with prisoner exchanges. Prior to the establishment of ZAKA, it was also responsible for treating the victims of suicide attacks. More recently, it was placed in charge of dismantling of the cemetery in Gush Katif during the Gaza disengagement plan.

Weiss introduced many changes into the Rabbinate including giving soldiers much more access to the unit and increasing the Rabbinate's dealings with the religious soldiers. Weiss is infamous for being the chief rabbi during the 2005 disengagement from Gaza and was in charge of disinterring 48 graves from the Gush Katif cemetery.[3] For that role, he has been criticized and attacked by opponents of the disengagement[4].

Succeeding him, Brigadier-General Rontzki began his service in the rabbinate on March 27, 2006. The appointment was recommended by the then Chief of Staff, Dan Halutz and approved by the then Minister of Defense, Shaul Mofaz.

This new appointment was seen as a direct consequence of the controversial remarks by Israel Weiss wherein he appeared to have agreed with the former Chief Ashkenazi National Authority of Religious Services Rabbi, Avraham Shapira, who called on soldiers who are religious Jews to disobey orders to forcefully remove settlers from the Gaza Strip during the Gaza disengagement plan. While Israel Weiss retracted and apologized for the "slip up", the event drew a great deal of controversy in military circles and in Israel in general.[citation needed]

According to Israeli left-wing human rights group Yesh Din, during the 2009 Gaza conflict the military rabbinate distributed a religious booklet that labeled specifically Palestinian terrorists as "murderers" and warned against showing mercy to them.[5] The publications compared modern-day Palestinians to the Biblical Philistines and denied the historical existence of a Palestinian national identity.[6] According to Yesh Din, the booklet could have been interpreted by soldiers as a call to act outside the confines of the international laws of warfare.[5]

A Haaretz editorial described the booklets as "sermons that preach, in the name of ostensibly religious values, the killing of civilians" and which "opposes all the combat values formulated in the IDF throughout the generations". The booklet includes sermons written by religious Zionist leader Shlomo Aviner[7]. It also accuses the material of fostering an atmosphere in which extremist sermons by Yitzhak Ginsburg praising Baruch Goldstein (described as "chauvinist and racist incitement") can be disseminated.[7]

Following a series of inquiries, both in the Knesset and within the IDF, it was determined that the distribution of the alleged booklets took place in a few isolated incidents, by non military personnel, without proper supervision of Military Rabbinate representatives[8]. Following this incident, guidelines were set to ensure the authority of both the Military Rabbinate and the Education and Youth Corps within the IDF.