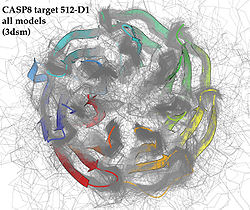 CASP, which stands for Critical Assessment of Techniques for Protein Structure Prediction, is a community-wide, worldwide experiment for protein structure prediction taking place every two years since 1994.[1] CASP provides research groups with an opportunity to objectively test their structure prediction methods and delivers an independent assessment of the state of the art in protein structure modeling to the research community and software users. Even though the primary goal of CASP is to help advance the methods of identifying protein three-dimensional structure from its amino acid sequence, many view the experiment more as a “world championship” in this field of science. More than 100 research groups from all over the world participate in CASP on a regular basis and it is not uncommon for the entire groups to suspend their other research for months while they focus on getting their servers ready for the experiment and on performing the detailed predictions.

In order to ensure that no predictor can have prior information about a protein's structure that would put him/her at an advantage, it is important that the experiment is conducted in a double-blind fashion: Neither predictors nor the organizers and assessors know the structures of the target proteins at the time when predictions are made. Targets for structure prediction are either structures soon-to-be solved by X-ray crystallography or NMR spectroscopy, or structures that have just been solved (mainly by one of the structural genomics centers) and are kept on hold by the Protein Data Bank. If the given sequence is found to be related by common descent to a protein sequence of known structure (called a template), comparative protein modeling may be used to predict the tertiary structure. Templates can be found using sequence alignment methods such as BLAST or FASTA or protein threading methods, which are better in finding distantly related templates. Otherwise, de novo protein structure prediction must be applied, which is much less reliable but can sometimes yield models with the correct fold. Truly new folds are becoming quite rare among the targets,[2][3] making that category smaller than desirable. 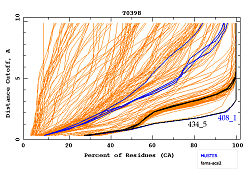 Cumulative plot of α-carbon accuracy, of all predicted models for target T0398 in CASP8, with the two best models labeled

The primary method of evaluation[4] is a comparison of the predicted model α-carbon positions with those in the target structure. The comparison is shown visually by cumulative plots of distances between pairs of equivalents α-carbon in the alignment of the model and the structure, such as shown in the figure (a perfect model would stay at zero all the way across), and is assigned a numerical score GDT-TS (Global Distance Test — Total Score) [5] describing percentage of well-modeled residues in the model with respect to the target. Free modeling (template-free, or de novo) is also evaluated visually by the assessors, since the numerical scores do not work as well for finding loose resemblances in the most difficult cases.[6] High-accuracy template-based predictions were evaluated in CASP7 by whether they worked for molecular-replacement phasing of the target crystal structure[7] with successes followed up later,[8] and by full-model (not just α-carbon) model quality and full-model match to the target in CASP8.[9]

Evaluation of the results is carried out in the following prediction categories:

The CASP results are published in special supplement issues of the scientific journal Proteins, all of which are accessible through the CASP website.[10] A lead article in each of these supplements describes specifics of the experiment [11] [12] while a closing article evaluates progress in the field. [13][14]