The Last House on the Left

The Last House on the Left

Infobox Film
name = The Last House on the Left 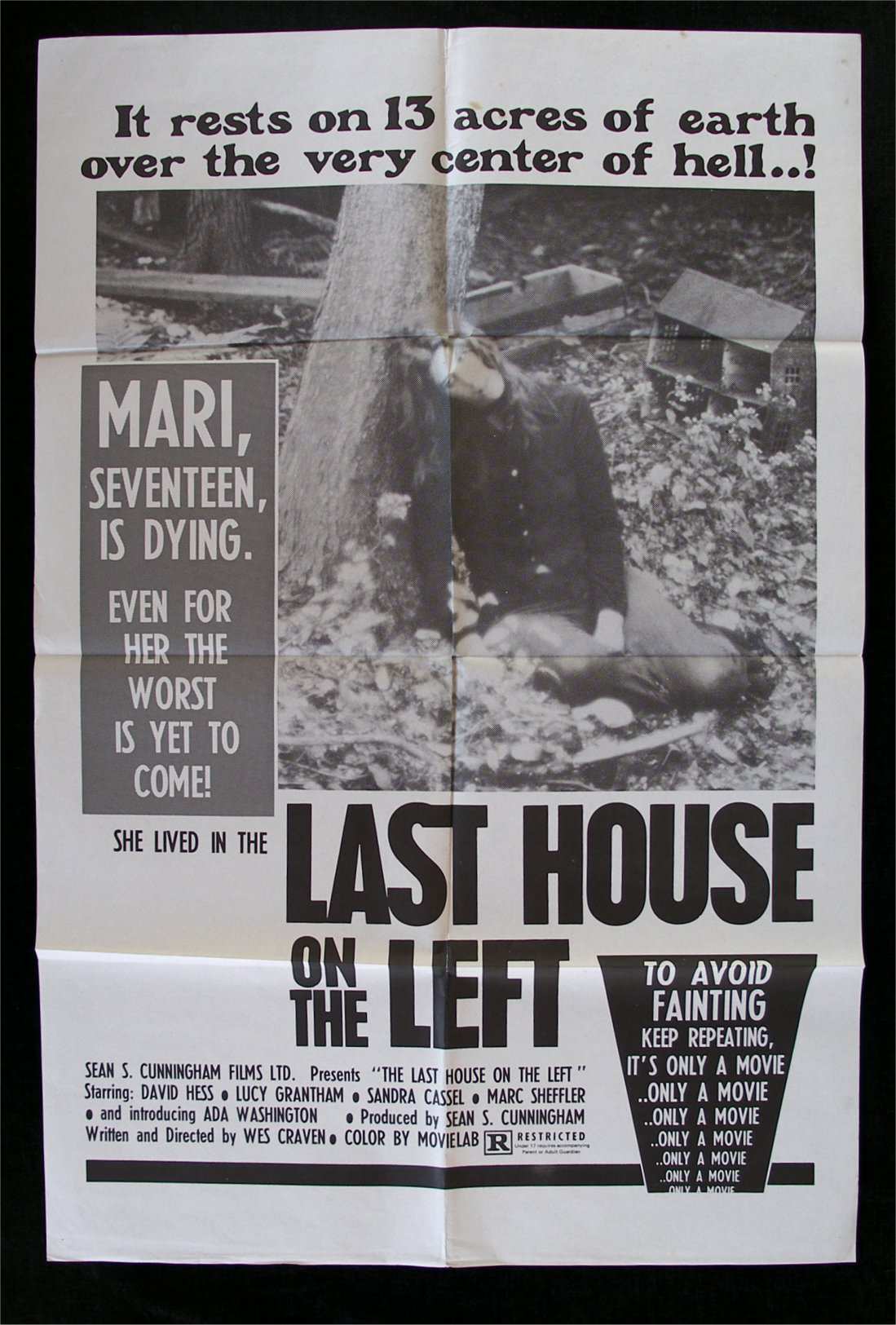 "The Last House on the Left" is a 1972 written and directed by and produced by .

Mari Collingwood () plans to celebrate her 17th birthday by attending a concert with her friend, Phyllis Stone (). Her parents express concern both at the band Bloodlust and Mari's friendship with Phyllis, who is implied to be of a lower social class. They let her go, however, and give her a gift before she leaves: a peace symbol necklace.

On the way to the city, Mari and Phyllis hear a radio report of a recent prison break, involving violent criminals by the names of Krug Stillo (), his son Junior, Sadie () and Fred "Weasel" Podowski (). Upon arrival in the city, Mari and Phyllis stroll the streets, seeking someone who might sell marijuana. Eventually, they run into Junior, who leads them back to an apartment, where they are immediately entrapped by the criminals. Phyllis, who resists, is punched in the stomach and raped, as Mari watches in horror. Mari's parents, meanwhile, prepare a surprise party for her.

The next morning, the girls are locked in a car trunk and driven to the countryside as the gang intends to leave the state. The villains' vehicle breaks down, though. Unable to get their car fixed, they drag the kidnapped girls into the woods. Removed from the trunk, Phyllis is beaten after biting Krug's hand; meanwhile, Mari, bound and gagged, realizes that they are coincidentally right near her own home. As she is helplessly dragged to the woods, her parents sit inside with two bumbling local police officers who assure them that Mari is probably fine. The officers disregard the gang's broken-down car when driving back to the police station.

In the woods, the girls are untied and subjected to several tortures, including forced , , and at the hands of Krug's girlfriend, Sadie. At the police station, the bumbling police officers realize their mistake in disregarding the car near the Collingwood's home and quickly set out. Their car breaks down en route, however, and the cops unsuccessfully try to hitch a ride with a group of hippies and a chicken farmer.

After Phyllis and Mari are forced to have sex, Sadie molests Mari. Phyllis whispers to Mari she will make a break for it to distract the kidnappers and thus, offer Mari an opportunity to escape. Phyllis takes off, chased by Sadie and Weasel, while Junior stays behind to guard Mari, who makes a desperate attempt to convince the troubled addict that he doesn't need to listen to his abusive father because Dr. Collingwood, her father, can help him instead. She also gives him her peace symbol necklace as a symbol of her trust. Meanwhile, Phyllis is eventually cornered at a cemetery, where Weasel stabs her in the back. The defeated Phyllis attempts to crawl away, but the gang inevitably catches up with her and repeatedly stab and disembowel her.

Mari eventually convinces Junior to let her go, though their timing is too late, as they are immediately halted by Krug. He presents Phyllis' severed hand and proceeds to carve his name into Mari's chest before sexually violating her. Following this act, Mari, sick from shock and blood loss, rises and slowly staggers over to the nearby lake. Krug shoots Mari in the head and she drifts away. Krug, Junior, Sadie and Weasel wash up and change out of their bloody clothes.

In their new attire, the gang shows up at the Collingwood's home, masquerading as traveling salesmen. Mari's parents agree to let them stay overnight. However, Junior exposes their identity, when his withdrawal symptoms cause him to end up vomiting in the bathroom, where Mari's mother Estelle sees Mari's peace symbol necklace dangling around his neck. She and Dr. Collingwood rush out into the woods, where the couple finds Mari's body by the lake. They decipher that their house guests killed their daughter.

Inside the house, Dr. Collingwood carries his shotgun into his daughter's bedroom, where two of the criminals are sleeping. Krug escapes into the living room and overpowers the doctor, but the criminal is then confronted by his own son, who now brandishes a firearm. Junior threatens to kill his father. However, Krug psychologically manipulates the already troubled young man, and Junior commits suicide with the weapon. As soon as Krug notices that Dr. Collingwood is missing, the doctor attacks Krug with a chainsaw.

Outside, Estelle has duped Weasel into a sex game, which concludes with her biting off the criminal's genitals. Weasel collapses in agony. Meanwhile, Dr. Collingwood continues approaching Krug with the chainsaw, as the sheriff arrives and pleads with the doctor not to go through with it. Dr. Collingwood murders Krug with the chainsaw anyway. Sadie runs outside, where she trips and drops her weapon. Estelle tackles Sadie, and after a struggle, Sadie punches Estelle but trips once again and falls into the family's pool. Estelle catches up with Sadie and slits her throat. The couple reunites in their living room in their blood-spattered clothes as the police look at the family and their murdered guests.

The film started life under the working title "Night Of Vengeance" and the script contained much more extreme sexual violence than what actually reached the film. It was also known as "Sex Crime Of The Century" and "Krug & Co." (some prints still exist with this as its title) before settling on the title, "Last House On The Left".

The Craven film was controversial for its graphic violence, and for the manner in which the villains imposed their ic and will upon the victims. Craven was highly influenced by news footage and wanted to convey that sense of violence he saw in that footage.

The film split opinion with critics, unsure whether the film is a bold artistic statement or exploitative trash, or some combination of the two. Audiences, however, flocked to see the film and, along with films such as "", it is credited with bringing a new sense of realistic violence to the modern horror film genre.

Wes Craven has since directed many popular horror films including "", "", and "Scream". Producer , meanwhile, went on to initiate one of the biggest horror film franchises in the 1980s with "Friday the 13th".

In the 2002 television special "Masters of Horror" (sometimes called "" and not to be confused with the series ""), Wes Craven admits that, due to the film being rejected multiple times by the ratings board, it had been extremely edited down. At a later point in time, they re-inserted much of the removed footage. Producer Sean Cunningham then borrowed a fellow filmmaker's print featuring R rating tag and spliced it in, allowing the film to be released uncut at least for a time in the United States.

The film's soundtrack was written-and partially sung-by David Hess, who also played the main antagonist Krug. It is particularly notable for being heavily contrasted with the events on screen. For example, as the gang drives the two girls out into the countryside, the upbeat, almost comical, tune "Baddies Theme" plays and, after the rape scene, a soothing ballad plays. This counterpointing was also used elsewhere in the film, with the slapstick antics of the two police officers occurring in between scenes of torture.

Although the soundtrack was released commercially around the same time as the film, it did not sell very well, although it has recently become available via David Hess' website.

The film had problems with censorship in many countries, and was particularly controversial in the . The film was refused a certificate for cinema release by the in 1974 [http://www.bbfc.co.uk/website/Classified.nsf/0/31911632127F0951802566C80031CEC7?OpenDocument] due to scenes of sadism and violence. During the early 1980s home video boom, the film was released uncut (save for an incidental, gore-free scene with the comedy cops, and the end credit roll) as a video that did not fall under their remit at the time. This changed when the "" scare which started in 1982 led to the . This in turn banned the film as one of the infamous list of "video nasties".

The film remained banned throughout the remainder of the 1980s and into the 1990s. However it had built a cult reputation in the UK, plus critics such as began to laud the film as an important piece of work. In 2000, the film was again presented to the BBFC for certification and it was again refused [http://www.bbfc.co.uk/website/Classified.nsf/0/989E06A37C4DB4B180256885002E278B?OpenDocument] , though it was granted a license for a one-off showing in in June 2000, after which the BBFC again declared that the film would not receive any form of certification.

In June 2002 the BBFC won against an appeal made to the Video Appeals Committee by video distributor Blue Underground Limited. The BBFC had required 16 seconds of cuts to scenes of sexual violence before the video could be given an ‘18’ certificate. Blue Underground Limited refused to make the cuts, and the BBFC therefore rejected the video. The distributor then appealed to the VAC, who upheld the BBFC's decision. [http://www.bbfc.co.uk/news/press/20020618.html] During the appeal, film critic Mark Kermode was called in as a horror expert to make a case for the film's historical importance. However, after his report, the committee not only upheld the cuts but doubled them [http://www.bbc.co.uk/blogs/markkermode/2008/05/dvd_news_last_house_on_the_lef.html] .

The film was eventually given an 18 certificate with 31 seconds of cuts on the 17th July 2002 [http://www.bbfc.co.uk/website/Classified.nsf/0/AE4F890AEAF8FEC680256BFB0031D829?OpenDocument] and was released in the UK on DVD in May 2003. The cut scenes were viewable as a slideshow extra on the disc, and there was a weblink to a website where the cut scenes could be viewed.

In August 2006, finalized a deal to remake "The Last House on the Left" with original writer and director as a producer. The company intended to preserve the storyline of the original film. Craven described his involvement with the remake: "I'm far enough removed from these films that the remakes are a little like having grandchildren. The story, about the painful side effects of revenge, is an evergreen. The headlines are full of people and nations taking revenge and getting caught up in endless cycles of violence." [cite news | author=Michael Fleming | url=http://www.variety.com/article/VR1117948565.html?categoryid=1236&cs=1 | title='Left' right for Rogue | publisher=Variety | date= | accessdate=2007-10-17 ] Craven formed , a shingle of Rogue Pictures, to remake "The Last House on the Left" as its first project. Production was slated for early 2007. [cite news | author=Michael Fleming | url=http://www.variety.com/article/VR1117950849.html?categoryid=1238&cs=1 | title=Helmer haunts Rogue's house | publisher=Variety | date= | accessdate=2007-10-17 ] Screenwriter was hired to write the script for the remake. In May 2007, Rogue Pictures entered negotiations with director to direct the film. [cite news | author=Borys Kit | url=http://www.hollywoodreporter.com/hr/content_display/film/news/e3i23e0aa399c616f0f7425d91a12a8f7c2 | title=Iliadis on path to 'House' redo | publisher= | date= | accessdate=2007-10-17 ]