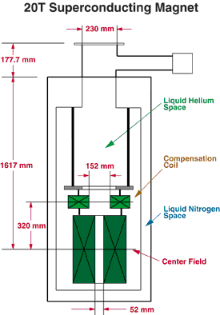 Schematic of a 20 tesla superconducting magnet with vertical bore

During operation, the magnet windings must be cooled below their critical temperature; the temperature at which the winding material changes from the normal resistive state and becomes a superconductor. Liquid helium is used as a coolant for most superconductive windings, even those with critical temperatures far above its boiling point of 4.2 K. This is because the lower the temperature, the better superconductive windings work—the higher the currents and magnetic fields they can stand without returning to their nonsuperconductive state. The magnet and coolant are contained in a thermally insulated container (dewar) called a cryostat . To keep the helium from boiling away, the cryostat is usually constructed with an outer jacket containing (significantly cheaper) liquid nitrogen at 77 K. One of the goals of the search for high temperature superconductors is to build magnets that can be cooled by liquid nitrogen alone. At temperatures above about 20 K cooling can be achieved without boiling off cryogenic liquids.[citation needed]

The superconducting portions of most current magnets are composed of niobium-titanium.[1] This material has critical temperature of 10 kelvins and can superconduct at up to about 15 teslas. More expensive magnets can be made of niobium-tin (Nb3Sn). These have a Tc of 18 K. When operating at 4.2 K they are able to withstand a much higher magnetic field intensity, up to 25 to 30 teslas. Unfortunately, it is far more difficult to make the required filaments from this material. This is why sometimes a combination of Nb3Sn for the high field sections and Nb3Ti for the lower field sections is used. Vanadium-gallium is another material used for the high field inserts.

High temperature superconductors (e.g. BSCCO or YBCO) may be used for high-field inserts when magnetic fields are required which are higher than Nb3Sn can manage.[citation needed] BSCCO, YBCO or magnesium diboride may also be used for current leads, conducting high currents from room temperature into the cold magnet without an accompanying large heat leak from resistive leads.[citation needed]

The coil windings of a superconducting magnet are made of wires or tapes of Type II superconductors (e.g.niobium-titanium or niobium-tin). The wire or tape itself may be made of tiny filaments (about 20 micrometers thick) of superconductor in a copper matrix. The copper is needed to add mechanical stability, and to provide a low resistance path for the large currents in case the temperature rises above Tc or the current rises above Ic and superconductivity is lost. These filaments need to be this small because in this type of superconductor the current only flows skin-deep.[citation needed] The coil must be carefully designed to withstand (or counteract) magnetic pressure and Lorentz forces that could otherwise cause wire fracture or crushing of insulation between adjacent turns. 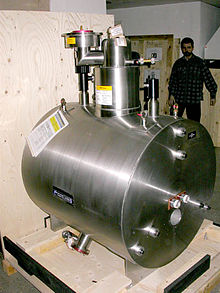 7 T horizontal bore superconducting magnet, part of a mass spectrometer. The magnet itself is inside the cylindrical cryostat.

The current to the coil windings is provided by a high current, very low voltage DC power supply, since in steady state the only voltage across the magnet is due to the resistance of the feeder wires. Any change to the current through the magnet must be done very slowly, first because electrically the magnet is a large inductor and an abrupt current change will result in a large voltage spike across the windings, and more importantly because fast changes in current can cause eddy currents and mechanical stresses in the windings that can precipitate a quench (see below). So the power supply is usually microprocessor-controlled, programmed to accomplish current changes gradually, in gentle ramps. It usually takes several minutes to energize or de-energize a laboratory-sized magnet.

An alternate operating mode, once the magnet has been energized, is to short-circuit the windings with a piece of superconductor. The windings become a closed superconducting loop, the power supply can be turned off, and persistent currents will flow for months, preserving the magnetic field. The advantage of this persistent mode is that stability of the magnetic field is better than is achievable with the best power supplies, and no energy is needed to power the windings. The short circuit is made by a 'persistent switch', a piece of superconductor inside the magnet connected across the winding ends, attached to a small heater. In normal mode, the switch wire is heated above its transition temperature, so it is resistive. Since the winding itself has no resistance, no current flows through the switch wire. To go to persistent mode, the current is adjusted until the desired magnetic field is obtained, then the heater is turned off. The persistent switch cools to its superconducting temperature, short circuiting the windings. The current and the magnetic field will not actually persist forever, but will decay slowly according to a normal L/R time constant:

A quench is an abnormal termination of magnet operation that occurs when part of the superconducting coil enters the normal (resistive) state. This can occur because the field inside the magnet is too large, the rate of change of field is too large (causing eddy currents and resultant heating in the copper support matrix), or a combination of the two. More rarely a defect in the magnet can cause a quench. When this happens, that particular spot is subject to rapid Joule heating, which raises the temperature of the surrounding regions. This pushes those regions into the normal state as well, which leads to more heating in a chain reaction. The entire magnet rapidly becomes normal (this can take several seconds, depending on the size of the superconducting coil). This is accompanied by a loud bang as the energy in the magnetic field is converted to heat, and rapid boil-off of the cryogenic fluid. The abrupt decrease of current can result in kilovolt inductive voltage spikes and arcing. Permanent damage to the magnet is rare, but components can be damaged by localized heating or large mechanical forces. In practice, magnets usually have safety devices to stop or limit the current when the beginning of a quench is detected. If a large magnet undergoes a quench, the inert vapor formed by the evaporating cryogenic fluid can present a significant asphyxiation hazard to operators by displacing breathable air. A large section of the superconducting magnets in CERN's Large Hadron Collider unexpectedly quenched during start-up operations in 2008, necessitating a replacement of a number of magnets.[2]

In 1986, the discovery of high temperature superconductors by Georg Bednorz and Karl Muller energized the field, raising the possibility of magnets that could be cooled by liquid nitrogen instead of the more difficult to work with helium.

In 2007 a magnet with windings of YBCO achieved a world record field of 26.8 teslas.[5] The US National Research Council has a goal of creating a 30 tesla superconducting magnet. 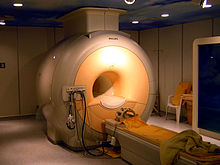 An MRI machine that uses a superconducting magnet. The magnet is inside the doughnut-shaped housing, and can create a 3 tesla field inside the central hole.

Superconducting magnets have a number of advantages over resistive electromagnets. They can achieve an order of magnitude stronger field than ordinary ferromagnetic-core electromagnets, which are limited to fields of around 2 T. The field is generally more stable, resulting in less noisy measurements. They can be smaller, and the area at the center of the magnet where the field is created is empty rather than being occupied by an iron core. Most importantly, for large magnets they can consume much less power. In the persistent state (above), the only power the magnet consumes is that needed for any refrigeration equipment to preserve the cryogenic temperature. Higher fields, however can be achieved with special cooled resistive electromagnets, as superconducting coils will enter the normal (non-superconducting) state (see quench, above) at high fields.

One of the most challenging use of SC magnets is in the LHC particle accelerator .[6] The niobium-titanium (Nb-Ti) magnets operate at 1.9 K to allow them to run safely at 8.3 T. Each magnet stores 7 MJ. In total the magnets store 10.4 GJ. Once or twice a day, as the protons are accelerated from 450 GeV to 7 TeV, the field of the superconducting bending magnets will be increased from 0.54 T to 8.3 T.

The central solenoid and toroidal field superconducting magnets designed for the ITER fusion reactor use niobium-tin (Nb3Sn) as a superconductor. The Central Solenoid coil will carry 46 kA and produce a field of 13.5 teslas. The 18 Toroidal Field coils at max field of 11.8 T will store 41 GJ (total?)[clarification needed]. They have been tested at a record 80 kA. Other lower field ITER magnets (PF and CC) will use niobium-titanium. Most of the ITER magnets will have their field varied many times per hour.

One high resolution mass spectrometer is planned to use a 21 Tesla SC magnet.[7]