:"This article is about a place in ; For the taxonomic classification, see "Infobox Pref GR
name = Thesprotia
name_local = Νομός Θεσπρωτίας 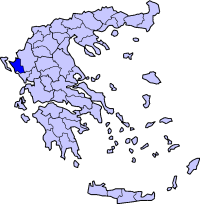 Thesprotia ( _el. Θεσπρωτία) is one of the . It is within the Epirus periphery. The capital is . Thesprotia is bounded by to the north, the prefecture of Ioannina to the east and in the south. It is one of the smallest Greek prefectures in population. There are three rural inhabitants for every two urban citizens [http://www.yuste.org/latoile/thesprotia.asp] .

The provinces are small and there are four of them.

Much of the prefecture is mountainous while farmlands most of them with gridded roads and ditches are within the valleys in the central, southern and the western part. Two of Thesprotia's rivers are legendary: The Kalamas River (Thiames) and , lined with reedbeds and plane trees.

A new highway, called "Via Egnatia", which began construction in 1996 links all the way to . The construction was fully paved in the 2000s. Via Egnatia was first opened to traffic in with thousands of people cheering and celebrating the opening as they stand next to the superhighway south of Igoumenitsa. A possible bridge to is currently unplanned and unscheduled. Main roads are GR-19 and GR-6.

The port of Igoumenitsa is overlooked by its Venetian fortress; it serves ferry routes to the islands of and (includes Paxos and Antipaxos).