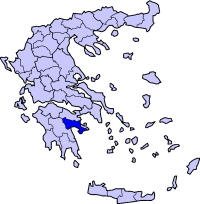 Argolis ( _el. Αργολίδα "Argolída", IPA2|aɾɣo̞ˈliða; polytonic|Ἀργολίς "Argolís" in and ) is one of the fifty-one . It is located in the eastern part of the Peloponnese. Most arable land lies in the central part. Its primary agricultural resources are oranges and s, and beaches are found in the south and east; mountains and hills dominate the west, northeast and east.

It is bounded by to the west and southwest, Corinthia to the north, the , the prefecture and the area to the east and southeast over water, and the to the south. (The Argolid of ancient times included Troezen.)

Its mountain ranges include and in the northwest.

In early 1998, a flash flood carrying muddy water swept through the valley near Argos and devastated citrus crops and other area agriculture, including olives and other crops, and grazing areas. Damages were several million drachmas, then still the currency of Greece.

The area is connected by highways: