The Double Dream of Spring

The Double Dream of Spring 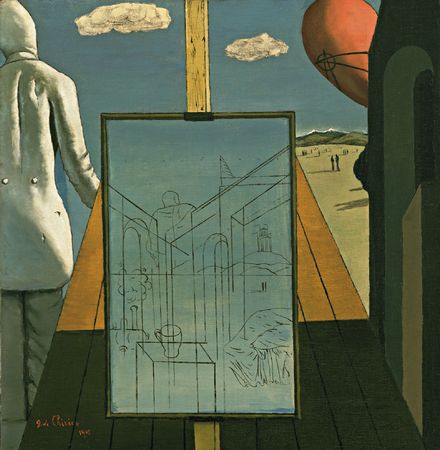 "The Double Dream of Spring" (also known as "Doppio Sogno di Primavera", 1915) is a painting by the Greek-Italian metaphysical painter .

The painting depicts two separate scenes. The scene on the left shows a statue from behind. The statue appears to be staring contemplatively into an open sky. The two scenes are separated in the middle by a wooden beam. At the base of the beam is a blueprint drawing of an interior. The scene on the right is a view looking down on a landscape. Above the landscape is the shape of the head of a tailor’s dummy.

Similar dummies appear many times in de Chirico’s work (cf. The Seer). This time the dummy’s head looms over the landscape like a hot air balloon.