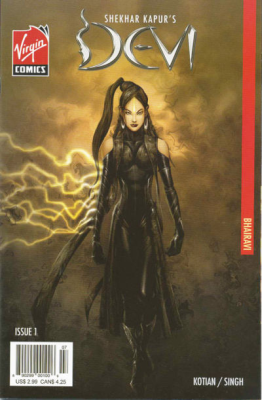 Devi is the fictional character created by and , as part of their debut Shakti line, which focuses on Indian settings.

Devi was a celestial warrior goddess created by the gods to fight the renegade god Bala in the second century of man. When Bala rose again to threaten the universe, Devi was reborn within the body of a young woman named Tara Mehta. [ [http://www.virgincomicsstore.com/devo1na.html Devi Volume 1: Namaha ] ]

The Devi entity had emerged within a warrior-woman of the Durapasya (human warriors of light) clan. She had led the armies of the gods and men on an all-out assault on Bala’s Fortress.

After defeating Bala through hand-to-hand combat, which led to the fallen god being blinded, captured, and imprisoned by Bodha, the supreme Lord of creation inside Jwala, the fortress of fire and stone (hidden deep within the earth) she had created a source to hold the prayers of humanity and channel them to Aakashik, the story's representation of heaven, thus replenishing the powers of the other pure gods. The key to Balas’ sarcophagus prison was entrusted to a creature of fire and stone called the Gatekeeper.

In the present, a woman by the name of , who is the unawakened Devi incarnate, lives a posh lifestyle alongside her boyfriend (who was the former favorite general of Bala during the ancient battle, and currently Sitapur’s most notorious ganglord). He also owns “the Abyss” night club.

An investigation by Inspector , a functioning alcoholic of the Sitapur police who drinks alcohol in order to self medicate an overactive supernatural ability, leads to pinpointing Iyam as a culprit. Meanwhile, , an Apsara - an assassin of heaven hired by Lord Bala using a woman named Amara Gaelle - goes to try and eliminate Tara Mehta before she becomes Devi. However, she is unsuccessful as the kidnap and drug her before she can kill her target.

Tara comes into contact with the first Devi who attempts to lead Tara on the road to rebirth as the Devi. Inspector Rahul Singh follows Iyam to a private meeting with where he learns of the supposed assassination attempt.

Iyam and Kratha come to a truce ending with Iyam paying Kratha double the amount of what she was paid by her previous master. Amara, Lord Bala's contact, kills 2 of Iyam’s bodyguards who had captured Inspector Rahul thus freeing him and seemingly following her own agenda.

*Devi - A supernatural entity created by the gods to defeat their enemy, Lord Bala.

*Lord Bala - An evil god bent on conquering heaven and subjugating man to his will. He feeds on the forced worship of his followers and he plans to stop the modern era version of the Devi and also to find the Source so as to gain its power.

* - A woman from the city of Sitapura who is said to become the next incarnation of Devi.

* - A cynical burnt out alcoholic police officer who, by a strange turn of events, finds himself as the sidekick of the current Devi incarnate, Tara Mehta.

* - An assassin hired by Lord Bala to kill Tara Mehta.

*Agantuk - A priest of the order of the Durapasya who advocates the "radical" idea of keeping the human host alive for the Devi entity. He is largely responsible for Tara's survival when the Devi entity manifests itself within her mind and body.

The story of the original Devi and her battle against and his hordes in the second century of man.

Return of in modern times and introduction of , the devi incarnate in the city of Sitapur

Tara is kidnapped by the , a cult of devi worshippers who initiate her transformation. The assassin arrives in to kill

Tara is attacked by Kratha while still in trance and the priest whisks her away in the nick of time to Durapasya headquarters.

Tara's transformation into devi is complete, but as and storm the temple, the human and the divine coexist in Tara.

Battle royale between the forces of Durapasya and Bala's hordes begin.

The battle between Tara and Bala.

An enigmatic supernatural being is drawn towards the new DEVI and we get glimpses of Tara, Rahul and Kratha's past through his eyes.

Tara learns to control her DEVI powers to some degree and fights a dreaded mob boss who is trying to gain control of the Sitapur underworld.

Tara and Kratha clash as the White Horseman manifests in Rahul's body declaring his intention to kill the DEVI, who he considers an abomination.

These have been released. Please update the review of the same.

The series is being collected as trade paperbacks: