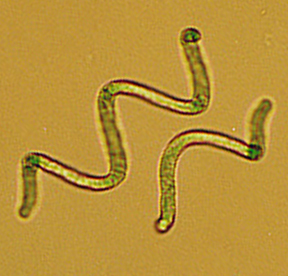 Spirulina is the common name for human and animal food supplements produced primarily from two species of (also known as blue-green algae): "Arthrospira platensis", and "Arthrospira maxima". These and other "Arthrospira" species were once classified in the genus "Spirulina". There is now agreement that they are distinct genera, and that the food species belong to "Arthrospira"; nonetheless, the older term Spirulina remains the popular name. Spirulina is cultivated around the world, and is used as a human as well as a and is available in tablet, flake, and powder form. It is also used as a feed supplement in the , , and industries.

Spirulina are free-floating filamentous cyanobacteria characterized by cylindrical, multicellular s in an open left-hand . Spirulina occurs naturally in tropical and subtropical lakes with high and high concentrations of and . "A. platensis" occurs in Africa, Asia and South America, whereas "A. maxima" is confined to Central America.

Spirulina is believed to have been a food source for the and other until the 16th-century; its harvesting from and subsequent sale as cakes is described by one of Cortés' soldiers. [Diaz Del Castillo, B. "The Discovery and Conquest of Mexico, 1517-1521." London: Routledge, 1928, p. 300.] The Aztecs called it Tecuitlatl, meaning stone's excrement. Spirulina was found in abundance at the lake by French researchers in the 1960s, but there is no reference to its use there as a daily food source after the 16th century. The first large-scale Spirulina production plant, run by Sosa Texcoco, was established there in the early 1970s.

postulated the development of algae-based food supplements (which he called "") in his 1961 short story, "The Voice of the Dolphins".

Spirulina may have an even longer history in , as far back as the 9th century . It is still in daily use today, dried into cakes called Dihé, which are used to make broths for meals, and also sold in markets. The Spirulina is harvested from small lakes and ponds around . [Abdulqader, G., Barsanti, L., Tredici, M. "Harvest of Arthrospira platensis from Lake Kossorom (Chad) and its household usage among the Kanembu." "Journal of Applied Phychology". 12: 493-498. 2000.]

Most cultivated spirulina is produced in open-channel s, with paddle-wheels used to agitate the water. The largest commercial producers of spirulina are located in the , , , , , and (i.e. Burma).

Nutrients and other chemicals

Spirulina contains an unusually high amount of protein, between 55% and 77% by dry weight, depending upon the source. It is a ,Fact|date=July 2008 containing all , though with reduced amounts of , , and when compared to the proteins of meat, eggs, and milk. It is, however, superior to typical plant protein, such as that from s.

Spirulina contains vitamin B1 (), B2 (), B3 (), B6 (), B9 (), , , and . However, this assay does not differentiate between true B12 (cobalamin) and similar compounds (corrinoids) that cannot be used in human metabolism. Cyanotech, a grower of spirulina, claims to have done a more recent assay, which has shown Spirulina to be a significant source of cobalamin. However the assay is not published for scientific review and so the existence of this assay is in doubt. The and in their position paper on diets state that spirulina can not be counted on as a reliable source of active vitamin B12. [ [http://www.eatright.org/ada/files/vegnp.pdf Position of the American Dietetic Association and Dietitians of Canada: Vegetarian diets] ]

Tests done on Australian grown spirulina by the Australian Government Analytical Laboratory (AGAL) show Vitamin B12 (cobalamin) levels of 659.1ug / per100g Fact|date=August 2008. A one gram tablet could provide more than three times the recommended daily intake of B12.

Evidence of health and healing effects

Despite existing research supporting Spirulina's health and healing properties, detractors claim that these are frequently overstated by Spirulina advocates. Conversely, Spirulina advocates have accused health food detractors of dismissing all such claims without acknowledging this research. Two online publications exemplify these opposing positions, respectively: [http://wellnessletter.com/html/ds/dsBlueGreenAlgae.php Wellness Letter on Blue Green Algae] , and [http://www.chlorellafactor.com/ Superfoods For Optimum Health: Chlorella and Spirulina] . Many positive claims are based on research done on individual nutrients that Spirulina contains, such as GLA, various , etc., rather than on direct research using Spirulina. What follows is research on the health and healing effects of Spirulina. research (e.g., studying cells in a petri dish) may suggest the possibility of similar results in humans but, due to the drastically different conditions of the research, provides only hints at the potential for human effects. Animal research can also provide evidence of potential human effects. Human research focuses on actual effects in humans - however, the validity and reliability of the research depends on the design of the study. The strongest evidence comes from well designed and controlled , which are one type of human research study.

A 2007 study found that 36 volunteers taking 4.5 grams of spirulina per day, over a six week period, exhibited significant changes in cholesterol and blood pressure: (1) lowered total cholesterol; (2) increased HDL cholesterol; (3) lowered triglycerides; and (4) lowered systolic and diastolic blood pressure. However, as this study did not contain a control group, researchers can not be confident that the changes observed are due totally - or even partially - to the effects of the Spirulina Maxima as opposed to other variables (i.e., history effects, maturation effects, ).

The United Nations World Food Cenference in 1974 lauded Spirulina as the 'best food for the future'. Recognising the inherent potential of Spirulina in the sustainable development agenda, several Member States of the United Nations came together to form an intergovernmental organization by the name of the Intergovernmental Institution for the Use of Micro-algae Spirulina Against Malnutrition. [ [http://www.iimsam.org/ IIMSAM, Permanent Observer Mission to the United Nations ] ] IIMSAM aspires to build a consensus to make Spirulina a key driver to eradicate malnutrition, achieve food security and bridge the health divide throughout the world.

Spirulina has been proposed by both (CELSS) ["Characterization of Spirulina biomass for CELSS diet potential." Normal, Al.: Alabama A&M University, 1988.] and the () [Cornet J.F., Dubertret G. "The cyanobacterium Spirulina in the photosynthetic compartment of the MELISSA artificial ecosystem." Workshop on artificial ecological systems, DARA-CNES, Marseille, France, October 24-26, 1990] as one of the primary foods to be cultivated during long-term space missions.

* [http://www.iimsam.org Intergovernmental Institution for the use of Micro-algae Spirulina Against Malnutrition (IIMSAM)]
* [http://silicasecchidisk.conncoll.edu/LucidKeys/Carolina_Key/html/Arthrospira_Main.html Micrographs and movies of A. "platensis."]
* [http://web.archive.org/web/20040323151937/http://www.javeriana.edu.co/universitas_scientiarum/vol8n1/J_bernal.htm A review of Spirulina (Arthrospira)]