The Nord Stage is a digital keyboard or stage piano manufactured by Clavia Digital Music Instruments of Stockholm, Sweden.

The Nord Stage builds on the success of the Nord Electro 2, whose accurate emulations of vintage electromechanical keyboard sounds made it very popular. The Stage extends the functionality of the Electro by first of all sporting a real weighted piano-like keyboard as well as adding a synthesizer section, a more versatile organ section, extended effects processing and the ability to function in layered and split keyboard modes.

The Nord Stage was unveiled in April 2005 at the Musikmesse music instrument convention in Frankfurt, Germany. A full-range, 88 weighted key version began shipping in September 2005; a 76 weighted key version started shipping in May 2006, and a 73 non-weighted version started shipping in August 2006. Like all other Nord keyboards, the Stage's metal panel is bright red, and the Stage also features similar wood panels to the Nord Electro, also in red. The 73 non-weighted version - the Compact - is essentially the Nord Stage engine in an Electro 73 case and keybed. 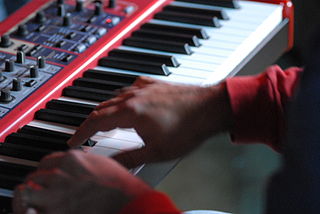 The Nord Stage is divided into three sound groups, the Organ Section, the Piano Section, and the Synthesizer Section. Each section can be played independently or simultaneously, divided into specific key ranges (splitting), and blended with independent volume controls.

The Nord Stage Organ Section provides physical models of three classic organs - the Hammond B3, the Vox Continental, and the Farfisa Compact. Instead of physical drawbars, the Organ section features "drawbuttons" with red LED strips to indicate the level of the harmonic. Percussion, Chorus & Vibrato, a rotary speaker emulation (similar to a Leslie speaker), and an overdrive are included for effect. The Organ section is 88-note polyphonic.

The Piano section uses samples of acoustic and electromechanical pianos. The Stage's 128 MB of internal memory allow multiple sample sets to be installed. While additional sampled piano sets are available as free downloads from Clavia's website, the Stage ships with Acoustic Grand, Acoustic Upright, Electric Grand, Epiano , Wurlitzer, and Clavinet samples. The Clav EQ buttons allow users to adjust the sound of the Clavinet. Acoustic Piano sounds are stereo samples, which can be switched manually to "Mono Mode", and can be played at 40-note polyphony; electric piano samples are mono and can be played with 60-note polyphony.

The Stage Synthesizer is not quite as involved as its traditional synthesizers, but is unique with the inclusion of wavetables with its analog oscillators and FM operators. Featuring filter and envelope controls, the Synth Section's timbre knob allows users to move through sound groups to create leads, pads, basses, and other synth sounds. The Synth also includes a 2-band EQ, a glide (portamento) function, and a unison function which is used to thicken the sound. The Synth Section is 16-note polyphonic.

Although not a sound generator, the Stage's External Section allows users to control other gear connected via MIDI. Common parameters such as zone, channel, and volume are controllable from the Stage.

The Stage is multitimbral - each of the Piano, Organ, and Synth Sections can sound at once. A set of sounds can be stored as a single program, however one can also create a second set. There are two Panels - A & B - that can be used for these setups within a single Program. Panels can be played independently (with no sound cutoff during change), or they can be layered together, creating its true multitimbral capacity: 6 voices.

Clavia's unique pitch stick is included (which can work on each section independently), as well as the ceramic mod wheel found on the Lead and Modular series.

Many of the parameter knobs are simple potentiometers, however there are several 360-degree lighted rotary encoders. These rotary encoders control parameters that can be "morphed". Morph Grouping is Clavia's technology that allows users to assign multiple parameters to one control, such as the mod wheel, a control pedal, or aftertouch.

A set of EPiano-style screw-in Legs are an available option for the Stage 88 and Stage 76. Custom soft cases are also available.