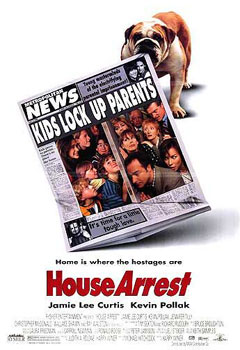 "House Arrest" is a 1996 comedy film. The film was directed by who has directed other films but is more prolific as a television series director. The film stars and . The film boasts a very thorough supporting cast in , , , , and an up and coming .

The film was released on , and went on to gross only over six million dollars at the . The film was panned by critics which could explain its low take at the box office.

The film was shot at various locations in the s of and . The main area for filming in California was . This was the location for both internal and external house scenes. and were used for the other film scenes.

The film begins by showing the Beindorf family, Janet (), Ned (), Grover (), and Stacy (), a supposedly happy family living a typical family life in the . It is revealed that the parents are not happy and are in fact separating although they tell their children it is not a divorce. The children of the family first try to recreate their parents' in the basement of the house but this fails to bring any happiness into their relationship. The children then leave the basement telling their parents they must get another surprise for them upstairs. The children go upstairs, close the door, and nail it shut. They vow to keep it shut until the parents work out their problems.

The next day, Grover Beindorf tells his best friend Matt () what he has done and T.J. (), the local bully, overhears the conversation. Matt goes over to the Beindorf's house to look at the children's work and is impressed and T.J. shows up to have a look and actually installs a newer, more secure door to keep the parents trapped. Matt and T.J. then leave to collect their parents and bring them to the Beindorf's house to lock them up as well. Matt's father () never keeps a wife for a long period of time and T.J.'s father () does not treat his wife () well.

The Beindorf parents almost talk Grover into letting them all out but T.J.'s father threatens him with legal action. Grover finds out that his dream girl, Brooke Figler (), is also having parental problems: her mother Cindy () acts like a teenager, going so far as to trying to hang out with her daughter's friends. Grover invites her to lock up her mother with the rest of the parents. The children lock up all the parents and begin to help them solve their problems. The parents try to find a way out of the basement while getting along and seeing what each of their problems are. The children also work out their differences with each other above. The kids eventually give in and give up to the and the parents are set free. it is revealed at the end that Grover's parents reconciled and took a second honeymoon to , Matt's parents are expecting another child, T.J.'s parents opened up a law firm together (though, they did divorce too), and Brooke's mom starts dating other men instead of intruding on her daughter's dates. However, Matt concluded if their parents ever try to divorce again he might thought of locking them in an attic.