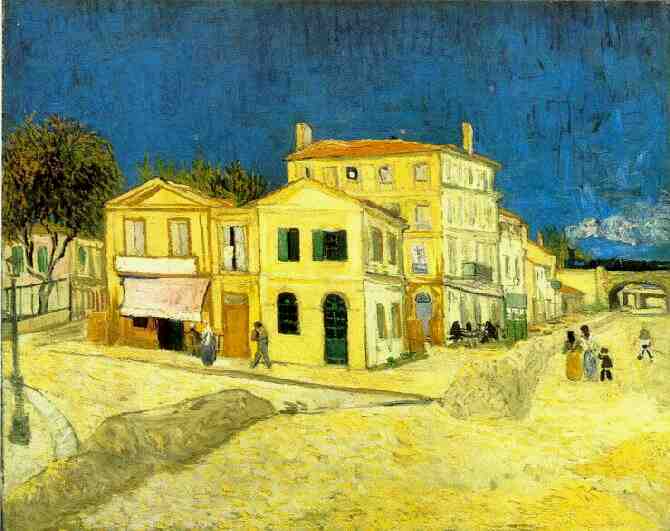 This title refers to the right wing of the building, 2, Place Lamartine, , , the house where, on , , Van Gogh rented four rooms, two large ones on the ground floor to serve as atelier and kitchen, and, on the first floor, two smaller ones facing Place Lamartine. The window on the first floor near the corner with both shutters open is that of Van Gogh's guest room, where lived for nine weeks from late October, 1888. Behind the next window, with one shutter closed, is Van Gogh's Bedroom. The two small rooms at the rear were rented by Van Gogh at a later time.

The left wing housed a grocery (French: "Comestibles", inscribed on the signbord over the marque).

The building suffered various rebuilding, before it was severely damaged in a bombing raid by the Allies on , [A photographic document of the damaged house survived (Van Gogh Museum, Archief M. E. Tralbaut), stamped "Photo E. Barral" and annotated by the author "La Maison de Van Gogh après le Bombardement du 25 Juin 1944"; it is reproduced in Wilkie, "In Search of Van Gogh," page 92] and was later demolished.

Van Gogh indicated that the restaurant, where he used to have his meals, was in the building painted pink close to the left edge of the painting (28, Place Lamartine). It was run by Widow Venissac, who was also Van Gogh's landlady, and who owned several of the other buildings depicted.

To the right side of the Yellow House, the Avenue Montmajour runs down to the two railway bridges. The first line, with a train just passing, served the local connection to Lunel, which is on the opposite (that is, right) bank of river Rhône. The other line was owned by the P.-L.-M. Railway Company: it connected Paris via Lyon to Marseille. ["The Railway Bridge", another painting by Van Gogh, supplies a view from this bridge back to Place Lamartine.]

In the foreground to the left, there is an indication of the corner of the pedestrian walk, which surrounded one of the public gardens on Place Lamartine. The ditch running up Avenue Montmajour from the left towards the bridges served the gas pipe, which allowed Van Gogh a little later to have gas light installed in his atelier. [ Letters [http://webexhibits.org/vangogh/letter/18/B22.htm B22] and [http://webexhibits.org/vangogh/letter/18/556.htm 556] ]

The painting was executed in September 1888, at which time Van Gogh sent a sketch of the composition to his brother Theo:

:"Also a sketch of a 30 square canvas representing the house and its setting under a sulphur sun under a pure cobalt sky. The theme is a hard one! But that is exactly why I want to conquer it. Because it is fantastic, these yellow houses in the sun and also the incomparable freshness of the blue. All the ground is yellow too. I will soon send you a better drawing of it than this sketch out of my head."

:"The house on the left is yellow with green shutters. It's the one that is shaded by a tree. This is the restaurant where I go to dine every day. My friend the factor is at the end of the street on the left, between the two bridges of the railroad. The night café that I painted is not in the picture, it is on the left of the restaurant."

:"Milliet finds this horrible, but I don't need to tell you that when he says he doesn't understand that one can have fun doing a common grocer's shop and the stiff and proper houses without any grace, but I remember that Zola did a certain boulevard in the beginning of , and Flaubert a corner of the embankment of the Villette in the dog days in the beginning of Bouvard and Pécuchet which are not to be sneezed at." [Letter [http://webexhibits.org/vangogh/letter/18/543.htm 543] ]

Other Depictions of the Yellow House

No preliminary work for this composition is known, but the building shows aup in a few other representations by Van Gogh.The water-colour is, according to Van Gogh, based on the painting.Decades later, Paul Signac, Van Gogh's comrade and partisan, did at least two water-colours of the site.

This painting never left the artist's estate. Since 1962, it is in the possession of the Vincent van Gogh Foundation, established by Vincent Willem van Gogh, the artist's nephew, and on permanent loan to the , Amsterdam.