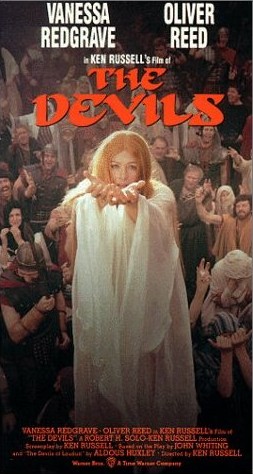 In 17th Century France, () is influencing Louis XIII () in an attempt to gain further power. He convinces Louis that the fortifications of cities throughout France should be demolished to prevent Protestants from uprising. Louis agrees, but forbids Richelieu from carrying out demolitions in the town of , having made a promise to its governor not to damage the town.

Meanwhile, in Loudun, the Governor has died, leaving control of the city to (), a dissolute and proud but popular and well-regarded priest. He is having an affair with a relative of Father Canon Mignon, another priest in the town, unaware that the deformed, neurotic Sister Jeanne (Vanessa Redgrave), head of the local convent, is sexually obsessed with him. She asks for Grandier to become the convent's new confessor. Grandier secretly marries another woman, but news of this reaches Sister Jeanne, driving her to insanity.

Baron de Laubardemont () arrives with orders to demolish the city, overriding Grandier's orders to stop. Grandier summons the town's soldiers and forces Laubardemont to back down until a proclamation from King Louis arrives. Grandier departs Loudun to visit the King. In the meantime, Sister Jeanne is informed by Father Mignon that he is to be her new confessor. She informs him of Grandier's marriage and affairs. Mignon relays this information to Laubardemont. In the process, the information is distorted to claim that Grandier has bewitched the convent and is using witchcraft. Laubardemont summons the lunatic inquisitor Father Barre, a "professional witch-hunter", whose interrogations actually involve depraved acts of "exorcism", including the forced administration of s to his victims. Sister Jeanne claims that Grandier has bewitched her, and the other nuns do the same. A public exorcism erupts in the town, in which nuns remove their clothes and enter a state of religious frenzy. An envoy from Louis arrives, claming to be carrying a holy relic which can remove the "devils" possessing the nuns. Father Barre "exorcises" the nuns with it. They appear as though they have been cured - until the envoy reveals the case allegedly containing the relic to be empty. Despite this proof that the exorcisms are a sham, they continue unabated, eventually descending into a massed orgy in which the nuns sexually assault a statue of Christ.

In the midst of the chaos, Grandier arrives and is immediately arrested. After being given a ridiculous trial, he is is tortured and shaven, although he manages to convince Mignon that he is innocent, and refuses to confess. He is then taken to be burnt at the stake. His executioner promises to strangle him before he is burnt rather than suffer the agonising death he would otherwise experience. Before this can happen, however, Barre starts the fire himself. As Grandier burns, the city walls are blown up, causing the people to flee.

After the execution, Barre leaves to continue his activities elsewhere. Laubardemont informs Sister Jeanne that Mignon has been imprisoned for claiming that Grandier is innocent. He gives her one of Grandier's charred bones and leaves. Sister Jeanne, now completely broken, masturbates pathetically with the charred femur. Grandier's wife is seen walking away from the city as the film ends.

Whilst historically based, as in Huxley's book, in "The Devils", director Russell took significant liberties with his depiction of the , their chronology, and circumstances; the depictions of King and do not resemble the historical figures. Louis XIII is depicted as an effeminate homosexual who amuses himself by shooting Protestants dressed as birds. Richelieu is borne in a chair by servants. Father Grandier, whilst a real figure who was indeed burnt at the stake, was in fact acquitted on the charges of bewitching nuns he is executed for in the film. He later spoke out against Cardinal Richelieu, who appointed a special commission to renew the charges of witchcraft, resulting in his execution. Certain figures present during the real Loudoun possessions are not present in the film, notably Father Tranquille, Father Lactance and Father Surin, in charge of the exorcisms at Loudun (in the film, Barre performs the exorcisms and torture).

Since the time of its release, the film has caused enormous controversy. In the it was banned by 17 local authorities, and everywhere attracted many scathing reviews. called it a "grand fiesta for sadists and perverts",Fact|date=April 2007 while called it "a very bad film indeed."Fact|date=April 2007 However, it won the award for Best Director-Foreign Film in the , despite being banned in the country. The awarded Ken Russell best director for "The Devils" and his next film, "". In 2002, when 100 film makers and critics were asked to cite what they considered to be the ten most important films ever made, "The Devils" featured in the lists submitted by critic and director .Fact|date=April 2007

The film's combination of religious themes and imagery combined with violent and sexual content was a test for the British Board of Film Censors that at the time was being pressured by socially conservative interest groups.

In order to earn an "X" certificate, Russell made minor cuts to the more explicit nudity (mainly in the cathedral sequences) and removed some violent detail (notably the crushing of Grandier's legs). However, the biggest cuts were made by the studio itself, prior to submission to the BBFC, removing two scenes in their entirety, notably a two-and-a-half-minute sequence of crazed naked nuns sexually assaulting a statue of Christ and about of half of a latter scene with Sister Jeanne masturbating with the charred tibia of Grandier after self-administering an enema. However, even in its released form, the film was considerably stronger in detail than most films released prior to that point.

Its fate in the United States was even more stringent, with a further set of cuts made to even more of the nudity with some key scenes (including Sister Jeanne's crazed visions, exorcism and the climactic burning) shorn of the more explicit detail.

The British version remains the most complete one in circulation, although there are long promised plans to release the uncut version on mass-market DVD. On , , "The Devils" was shown for a second time in its fullest possible state to a group of students and staff at the , followed by a question and answer session with the director, moderated by Mark Kermode. It was the first significant event to take place during Russell's tenure as a visiting fellow at the University of Southampton in the English and film departments, April 2007 to March 2008.

An -format DVD edition on the Angel Digital label appeared in 2005, with the so-called "Rape of Christ" scene and other censored footage restored, and featuring a documentary by about the film, as well as interviews with Russell, some of the surviving cast members, and a member of the BBFC who participated in the original censorship of the film.

DVDActive.com announced on that "The Devils" would finally be released on DVD by Warner Home Video in the U.S. on , in the uncut (111 min) version, but without additional material. However, a day later, a DVDActive forum post asserted that the release had been dropped from Warner's schedule. [ [http://www.dvdactive.com/news/releases/the-devils.html DVDActive.com listing] ] .