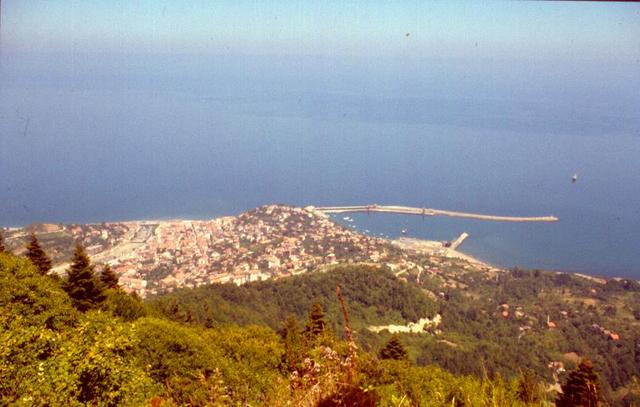 İnebolu is a small town of less than 10,000 inhabitants, located on the coast of . It is convert|590|km|mi|0|abbr=on from by road and convert|89|km|mi|0|abbr=on north of . It is a typical Black Sea port town with many fine examples of traditional domestic architecture.

The exact founding date of İnebolu is unknown. Some historiansWho|date=June 2007 claim that İnebolu was founded by in 1200 B.C., while others assume that İnebolu was first settled by s. İnebolu was initially called "," given its n location. Over time, the name "Ionopolis" metamorphosed to "Inepolis," and then to "İnebolu."

During the , arms and ammunition were transferred to Anatolia through İnebolu. The town was attacked and defended itself with determination, for which it was honoured with the Independence Medal by the Turkish .

Atatürk initiated a campaign in İnebolu to reform personal appearance and "civilize" garments; Atatürk made a well-known speech about hats there.

In accordance with the in 1923, the town's Greek inhabitants were exiled to Greece. Many of these emigrants settled in a neighborhood called "Inepolis" in the Athenian suburb of .

There is little left of archaeological note in İnebolu, other than the ruins of its first, second and third fortifications.

The ruins of the first castle, most of which has been destroyed and upon which much has been built, are located in . The east wall of the castle extends from the , over the hill, and up to the quarter called . The ruins of the fortress walls are located around the cemeteries on the Abas hills. A part of the north wall of the interior castle, which is 6 meters high and 3 meters wide, still stands.

The second castle stood where today's primary school is. A few parts of the walls can still be seen.

The third castle is on hill, from where the whole region of İnebolu can be seen. It is located south of the town and is of considerable height. There are also the undated ruins of a monastery, which have been heavily pillaged by artifact-seekers. Only some parts of the walls, large main entrance stairs, the baptisimal basin and well remain. Greeks who live in İnebolu celebrate the 15th of August here by holding a feast.

There are many small towns scattered around İnebolu. To the east lie Abana and Bozkurt. To the west is and to the south lie and Küre.

Küre and the larger Isfendiyar mountains rise above the coastline, which is narrow and steep, with few sandy beaches.

The sea around İnebolu is approximately 200 meters deep.

The region's rivers flow down from the Isfendiyar mountains through İnebolu and its surroundings to the Black Sea. The river beds are irregular and deep. The currents are strong.

Some of the important rivers around İnebolu are:

The town is surrounded by many hills of varying height. The most well-known are the Geriş hill (Geriş Tepesi), which is 495 meters high, and the Islam hill to the southwest, which is 589 metres high.

Snowfall is heavy during the winter, but the snow dissipates rapidly because of strong winds.

The region is thickly wooded.

Historically, the port of İnebolu was a bustling merchant city, long considered the gateway to east. Its was founded in 1887; at the time, records indicate that İnebolu was home to 2500 registered merchants and 1000 independent craftsmen.

However, traffic was eventually routed around Kastamonu and İnebolu lost its commercial importance, leaving only the timber industry viable.

Soil conditions make most agriculture difficult, but fruit, wheat and corn are cultivated. Inland, there are thick forests and grasslands where cattle is farmed.

Tomatoes, beans and paprika are the most popular vegetables grown in İnebolu. Chestnuts, pears, mulberries, figs, walnuts and hazelnuts are also grown in the region.

İnebolu is known for its thriving apiary industry.

İnebolu offers many fine examples of traditional Turkish architecture in the . By the end of the 19th century many wealthy inhabitants İnebolu built large houses along the banks of the river that divides the town. By 1890, the town had hundreds of beautiful houses built in this special style:

The ground floor is built of stone and contains a cellar and pantry. Above it are one or two stories, each containing four bedrooms, one antechamber, a kitchen and toilet. Each of the floors is built so that it can easily be converted into one independent flat by closing a single door. This feature allows the married children of families to continue living in the same ancestral home they grew up in. Each floor also has its own separate street access.

The rooms have many windows and each room has a corbel and framework which enables the women to look out onto the street without being seen. The ceilings of the rooms are high and covered in carved art. Hand-rails in the houses are carved from a single piece of wood.

Most of the houses have roofs that are tiled with a special sea-stone called “.” The tiles are wide, thin and heav, and protect the houses from the strong northeast winds that blow across the Black Sea. The stone also provides an excellent insulation against heat.

Each house has an orchard garden, where fruits such as plums, mulberris, apples, pears, hazelnuts and walnuts are grown. Each garden has a well, which is used to refrigerate foodstuffs during the hot summer days.

The houses are painted with a special claret mineral pigment known as , which is highly resistant to sunlight and weathering.

There is no passenger boat service to İnebolu. However, motorways and highways are sufficient and in good condition. There are several private bus companies which have scheduled bus service to and from Istanbul, Ankara and the provincial capital of Kastamonu. Nearby towns such Kure, Cide, Abana and Bozkurt can be travelled to by mini-buses which run many times a day.

The town has many hotels, motels, and inns. It accommodates guests with a capacity of 400 available beds (2002).
* [http://ineboluphotogallery.blogcu.com İNEBOLU PHOTO GALLERY]