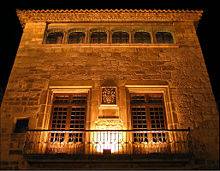 One of the medieval buildings in Montblanc 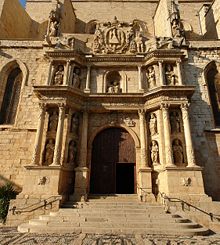 Barroque entrance of the church of Santa Maria

Montblanc (Catalan pronunciation: [mumˈbɫaŋ]) s the capital of the Catalan comarca Conca de Barberà, in the Spanish province of Tarragona.

The Prades Mountains are located in the vicinity of this municipality.

The area around Montblanc has been inhabited for thousands of years. Evidence of cave dwellings have been found dating back to Palaeolithic times.

After the invasion by the Moors in 711 AD, much of the area became dominated by a patchwork of Islamic fiefdoms. The Islamic invasion initiated a long period of very successful agricultural and commercial development. This was responsible for the birth of many towns and villages in the region which still retain their Islamic names.

The 10th and 11th centuries seem to have been a period of relatively peaceful coexistence in which Muslims, Christians and Jews lived in the region of Montblanc. This productive period continued until an allegiance of forces, strongly supported by the Roman Catholic Church, initiated an era of expulsions, which forced the Moors, the Jews and many of the interbred mixed race peoples to leave the Iberian peninsula.

Maties Palau Ferré (1921-2000), painter and sculptor, disciple of Pablo Picasso, was born and died in Montblanc.