The first recorded maritime combat activity in New Zealand occurred when Dutch explorer Abel Tasman was attacked by Māori in war waka off the northern tip of the South Island in December 1642.

World War I and the Inter-War period 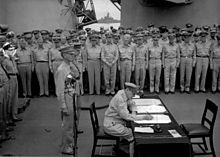 Air Vice-Marshal Sir Leonard Monk Isitt (highlighted) as the New Zealand representative during the signing of the Japanese Instrument of Surrender. 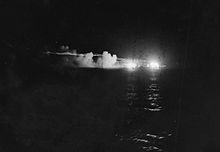 HMNZS Leander and USS St. Louis fire on the Jintsu.

HMNZS Achilles participated in the first major naval battle of World War II, the Battle of the River Plate off the River Plate estuary between Argentina and Uruguay, in December 1939. Achilles and two other cruisers, HMS Ajax and HMS Exeter, were in an operation that forced the crew of the German pocket battleship Admiral Graf Spee to scuttle her rather than face the loss of many more German seamen's lives. This decision apparently infuriated Hitler. Achilles moved to the Pacific, and was working with the United States Navy (USN) when damaged by a Japanese bomb off New Georgia. Following repair, she served alongside the British Pacific Fleet until the war's end.

HMNZS Leander escorted the New Zealand Expeditionary Force to the Middle East in 1940, and was then deployed in the Mediterranean Sea, the Red Sea, and the Indian Ocean. Leander was subjected to air and naval attack from Axis forces, conducted bombardments, and escorted convoys. In February 1941, Leander sank the Italian auxiliary cruiser Ramb I in the Indian Ocean. In 1943, after serving further time in the Mediterranean, Leander returned to the Pacific Ocean. She assisted in the destruction of the Japanese cruiser Jintsu and being seriously damaged by torpedoes during the Battle of Kolombangara. The extent of the damage to Leander saw her docked for repairs until the end of the war.

As the war progressed, the size of the RNZN greatly increased, and by the end of the war there were over 60 ships in commission. These ships participated as part of the British and Commonwealth effort against the Axis in Europe, and against the Japanese in the Pacific. They also played an important role in the defence of New Zealand, from German raiders, especially when the threat of invasion from Japan appeared imminent in 1942. Many merchant ships were requisitioned and armed for help in defence. One of these was HMNZS Monowai, which saw action against the Fiji in 1942. In 1941-1942, it was decided in an agreement between the New Zealand and United States governments that the best role for the RNZN in the Pacific was as part of the United States Navy, so operational control of the RNZN was transferred to the South West Pacific Area command, and its ships joined United States 7th Fleet taskforces.

In 1943, the light cruiser HMS Gambia was transferred to the RNZN as HMNZS Gambia. In November 1944, the British Pacific Fleet, a joint British Commonwealth taskforce, was formed, based in Sydney, Australia. Most RNZN ships were transferred to the BPF, including Gambia and Achilles. They took part in the Battle of Okinawa and operations in the Sakishima Islands, near Japan. In August 1945, HMNZS Gambia was New Zealand's representative at the surrender of Japan. 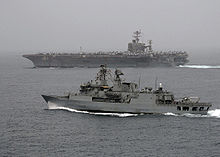 RNZN ships participated in the Korean War, Malayan Emergency, and the Indonesia-Malaysia confrontation. In the past three decades, the RNZN has operated in the Middle East a number of times. RNZN ships played a role in the Iran–Iraq War, aiding the Royal Navy in protecting neutral shipping in the Indian Ocean. Frigates were also sent to participate in the first Gulf War, and more recently Operation Enduring Freedom.[2] The RNZN has played an important part in conflicts in the Pacific as well. Naval forces were utilised in the Bougainville, Solomon Islands and East Timor conflicts of the 1990s. The RNZN often participates in United Nations peacekeeping operations. The Navy's operational authority was the Commodore, Auckland, from 1961[3] which changed to the Maritime Commander in March 1993.[4]

The RNZN has played a much broader role than just conflict-related activities. Since 1946, it has policed New Zealand's territorial waters and Exclusive Economic Zone for fisheries protection. It also aids New Zealand's deployment in Antarctica, at Scott Base.

One of the best-known roles that the RNZN played on the world stage was when the frigates Canterbury and the Otago were sent by the Labour Government of Norman Kirk to Moruroa Atoll in 1973 to protest against French nuclear testing there. The frigates were sent into the potential blast zone of the weapon, which forced France to postpone the tests.

Until the 1960s, the RNZN had, in common with other Dominion navies, flown the White Ensign as a common ensign. Post-war, the foreign policies of these independent states had become more distinctive and there was a wish and a need for separate identities, particularly if one Dominion was engaged in hostilities where another was not. Thus, in 1968, the RNZN adopted its own ensign, which retains the Union Flag in a top quarter but replaces the St George's Cross with the Southern Cross constellation that is displayed on the national flag.

The RNZN is currently in a transitional period where its role is being broadened into a navy that is more versatile than in the more recent past. Formerly combat-oriented and based on the frigate, a number of new ships have been incorporated into the fleet that have given the RNZN a much broader potential platform from which to work.

The categorisations of the ships used here are taken from the RNZN website.[5] 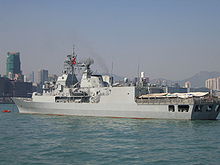 The naval combat force currently consists of two Anzac Class frigates: HMNZS Te Kaha and HMNZS Te Mana. Both ships are based at the Devonport Naval Base on Auckland's North Shore. Te Kaha was commissioned on 26 July 1997 and Te Mana on 10 December 1999.

The specifications and armaments of the two ships are identical.[6][7]

The Naval Patrol Force (NPF) is responsible for policing New Zealand's Exclusive Economic Zone, one of the largest in the world. In addition the NPF provides assistance to a range of civilian government agencies, including the Department of Conservation, New Zealand Customs and Police, Ministry of Fisheries and others. The NPF currently consists of:

HMNZS Endeavour is the fleet tanker. She provides fuel and other supplies for the frigates when they are on international operations, and for allied ships should this be required. Endeavour takes her name from the Royal Navy ship that carried James Cook to New Zealand on his first voyage, in 1769. Her home port is the city of New Plymouth.

The hydrographic survey ship of the RNZN is HMNZS Resolution. Resolution is used to survey and chart the sea around New Zealand and the Pacific Islands. She was formerly the United States Navy USNS Tenacious, used to tow sonar arrays to detect enemy submarines. A small motor boat, Adventure, is operated from Resolution. Her home port is the city of Gisborne. Resolution carries some of the most advanced survey technology available.[9]

The RNZN operates five Kaman SH-2G Seasprite helicopters for use on the two frigates, and for future use on the new multi-role vessel and two offshore patrol craft that will be incorporated into the fleet in 2007 and 2008. These five aircraft are part of No. 6 Squadron of the RNZAF. The squadron is based at Whenuapai in Auckland, and helicopters are assigned to the ships as they are sent on deployments across the globe. The roles of the helicopters include:

The New Zealand Government defence white paper released in November 2010 has called for an upgrade of the ANZAC frigates and the replacement of HMNZS Endeavour with a more capable ship. HMNZS Resolution and Manawanui are to be replaced with a single ship.[12]

In its Statement of Intent, the NZDF states its primary mission as:

"to secure New Zealand from external threat, to protect our sovereign interests, including in the Exclusive Economic Zone (EEZ) and to be able to take action to meet likely contingencies in our strategic area of interest."[13]

The intermediate outcomes of the NZDF are listed as:

The role of the navy is to fulfil the maritime elements of the missions of the NZDF.

The RNZN has a role to help prevent any unrest occurring in New Zealand. This can be done by having a presence in overseas waters and assisting redevelopment in troubled countries. For example, any unrest in the Pacific Islands has the potential to affect New Zealand because of the large Pacific Island population. The stability of the South Pacific is considered in the interest of New Zealand. The navy has participated in peace-keeping and peace-making in East Timor, Bougainville and the Solomon Islands, supporting land based operations.

The 2002 Maritime Forces Review identified a number of roles that other government agencies required the RNZN to undertake. Approximately 1,400 days at sea are required to fulfil these roles annually.

Roles include patrolling the Exclusive Economic Zone, transport to offshore islands, and support for the New Zealand Customs Service.

Since 2001, both ANZAC frigates have participated in the United States' Operation Enduring Freedom in the Persian Gulf and have conducted maritime patrol operations in support of American and allied efforts in Afghanistan.

All regular force personnel on discharge from the RNZN are liable for service in the Royal New Zealand Navy Fleet Reserve. The Fleet reserve has an active and inactive list. RNZNVR personnel can choose to serve four years in the fleet reserve on discharge.

The RNZN has not published Fleet Reserve numbers since the early 1990s.

The primary reserve component of the RNZN is the Royal New Zealand Naval Volunteer Reserve (RNZNVR), which is organised into four units based in Auckland (with a satellite unit at Tauranga), Wellington, Christchurch, and Dunedin:

At present civilians can join the RNZNVR in one of three branches: Administration, Sea Service (for service on IPVs), and Maritime Trade Organisation (formerly Naval Control of Shipping). In addition ex regular force personnel can now join the RNZNVR in their former branch, and depending on time out of the service, rank. The requirement to attend compulsory training one night a week has recently been removed.

Naval Ratings begin a 12-week basic training course (Basic Common Training) prior to commencing their branch training which focuses on their chosen trade.

The RNZN is funded through a "vote" of the New Zealand Parliament. The New Zealand Defence Force funds personnel, operating and finance costs. Funding is then allocated to specific "Output Classes", which are aligned to policy objectives.

Funding allocation in each Output Class includes consumables, personnel, depreciation and a 'Capital Charge'. The Capital Charge is a budgetary mechanism to reflect the cost of Crown capital and was set at 7.5% for the 2009/2010 year[17].

The Museum, adjacent to HMNZS Philomel, the RNZN Naval Base in Devonport (Auckland), contains important collections of naval artefacts, and extensive records.

HMNZS Irirangi was a Naval Communication Station at Waiouru

Uniforms of the RNZN are very similar to those of the British Royal Navy and other Commonwealth of Nations navies. However, RNZN personnel wear the nationality marker "NEW ZEALAND" on a curved shoulder flash on the service uniform and embroidered on shoulder slip-ons. Also, the RNZN uses the rank of Ensign as its lowest commissioned rank.