Hard as a Rock

Hard as a Rock 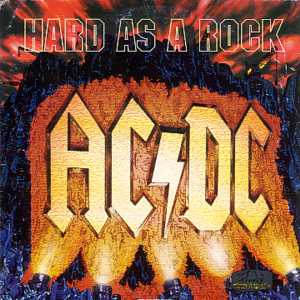 "Hard as a Rock" is a song and a single by , a popular band from . This song appears as the very first track on their album, "", released in 1995. The song also was performed live on two of 's live concert s, "" (which an audio version is found on the n tour edition of "") and "Stiff Upper Lip Live". It also appears on the 2007 3 Disc DVD. This song contains several concerning : "Her hot potatoes, will elevate you","Her bad behavior will leave you standing proud".

The music video to this song was directed by , and was set at the Bray Studios in Windsor, . Lots of fans gathered to be a part of this video, and can be seen front of the stage, and also seen behind the bars which surrounds the stage the band plays on. Also, in the video, lead guitarist is seen playing his on a wrecking ball, which destroys a building. Angus Young had stated in the documentry that he had a fear of heights when doing this before. Everybody accidentally forgot that Angus was left 80 feet in the air on a wrecking ball. The video can be seen on the version of "" (which also includes the documentry on how the video was made) or the link shown below.