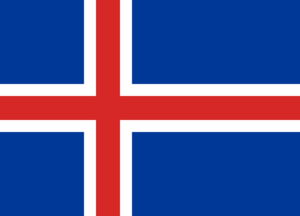 The flag of Iceland was officially described in Law No. 34, set out on 17 June 1944, the day became a . The law is entitled "The Law of the National Flag of Icelanders and the State Arms" and describes the Icelandic flag as follows:

:The civil national flag of Icelanders is blue as the sky with a snow-white cross, and a fiery-red cross inside the white cross. The arms of the cross extend to the edge of the flag, and their combined width is 2/9, but the red cross 1/9 of the combined width of the flag. The blue areas are right angled rectangles, the rectilinear surfaces are parallel and the outer rectilinear surfaces as wide as them, but twice the length. The dimensions between the width and length are 18:25.

Iceland's first national flag was a white cross on a deep blue background. It was first paraded in 1897. The modern flag dates from 1915, when a red cross was inserted into the white cross of the original flag. It was adopted in 1918 and became the national flag when Iceland gained independence from Denmark in 1944. For the Icelandic people the flag's coloring represents a vision of their country's landscape. The colors stand for 3 of the elements that make up the island. Red is the fire produced by the island's volcanoes, white recalls the ice and snow that covers Iceland, and blue for the Atlantic Ocean.

The civil flag of had been used as an unofficial symbol since 1913. It was officially adopted on 19 June 1915, to represent as a territory of , and has been in use at sea since 1 December 1918, when Iceland became a separate Kingdom in union with the Danish Kingdom. On 17 June 1944 it was instated as the emblem of the independent republic of Iceland. Like other es, it is based on the Dannebrog. (It is also a reverse color image of the a country with which it has strong ancestral ties.) The design of the national flag ensign is based on that of , with the colours reversed. Blue and white are the traditional national colours of and red symbolizes links with Norway, where most of their ancestors originated. The Scandinavian cross shows that Iceland belongs to the family of n countries. Other symbolic meanings refer to the natural features of Iceland itself. Blue is the colour of the , white represents the and covering the for most of the year, and red the volcanoes on the Island.

Laws regarding the flag

On 17 June, 1944, the day Iceland became a republic, a law was issued that dealt with the national flag and the . To date, this is the only major law to have been made about the flag and coat of arms, aside from two laws made in 1991: one that defines official flag days as well as the time of day the flag can be drawn, and another that defines the specific colours that the Icelandic flag is composed of (until then, the colouring had followed by convention; the new law set the common custom in stone).

The law describes the dimensions of both the common flag and special governmental flags used by embassies and the Ministry of Foreign Affairs. It also goes into details of usage, such as how the flag should be attached in different situations such as on a flagpole, a house and on different kinds of ships.

According to the law, using the flag is a privilege and not a right. The owner must follow instructions on its usage and make sure that his or her flag is in mint condition regarding colouring, wear and tear. It also states that no-one shall disrespect the flag in act or word, subject to a fine or imprisonment of up to one year.

The original law stated in its seventh article that another law would be set regarding official flag days and the time of day that the flag may be drawn, but such a law was not put into effect until almost 50 years later in 1991. This law states that the flag shall not be drawn until 7 o'clock in the morning, that it should preferably not be drawn longer than until but that it must not be drawn longer than . However, if the flag is raised at an outdoor assembly, an official gathering, or a the flag may be drawn as long as the event lasts, though never longer than .

According to Law No. 5 of 23 January 1991, the following are nationally sanctioned flag days. On these days the flag must be raised at official buildings, and those under the supervision of officials and special represtentatives of the state. Any additions to the list below can be decided each year by the Prime Minister's Office. On these days, the flag must be fully drawn, except on where it must be drawn at half-mast.

The Icelandic state flag ("Ríkisfáni"), known as the "Tjúgufáni" was first flown on the first of December 1918 from the house of ministry offices, although laws regarding its uses had not been finished. It wasn't until the 12th of February 1919 that such law was enacted.

The State flag is used on governmental buildings and embassies. It is also permitted to use the flag on other buildings, if they are being used by the government in some fashion. The "Tjúgufáni" is the of the as well, and state ships and other ships put to official uses are permitted to use it.

The Icelandic Presidential flag is used on the dwellings of the President as well as any vehicles that are used to transport him or her.

Colours of the flag

Officially, the colours of the Icelandic flag follow a law set in 1991 which states that the colours must be the following Standard Colour of Textile ("Dictionnaire Internationale de la Couleur") hues:flag means fáni(Sky-blue, snow-white, fire-red)

Recently, the government of Iceland has considered issuing colour specifications in the better known and systems. However, no official action was taken, and the PMS and CMYK specifications remain unofficial proposals.