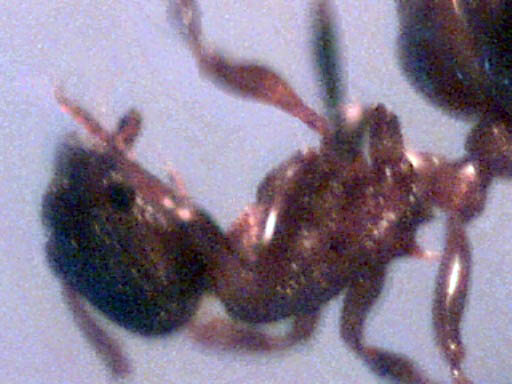 image_width = 200px
image_caption = A small pavement ant, magnified 60×. The spine on the back and the two nodes on the petiole are visible in the bottom-right corner.
regnum = ia
phylum = a
classis = a
ordo =
familia = Formicidae
subfamilia =
genus = ""
species = "T. caespitum"
binomial = "Tetramorium caespitum"
binomial_authority = (Linnaeus, 1758)

The pavement , "Tetramorium caespitum", is a common household pest. Their name comes from the fact that they usually make their homes in pavement. They are distinguished by two spines on the back, two nodes on the petiole, and grooves on the head and thorax [cite web |url=http://www.ipm.ucdavis.edu/TOOLS/ANTKEY/pavement.html |title=Pavement ant — "Tetramorium caespitum" |publisher= |date=] .

During early spring, colonies attempt to conquer new areas and often attack nearby enemy colonies. These result in huge sidewalk battles, sometimes leaving thousands of ants dead. Because of their aggressive nature, they often invade and colonize seemingly impenetrable areas.In summer time the ants dig out the sand in between the pavements to vent the nests.

The pavement ant is dark brown to blackish, and one-eighth inch long. It will eat almost anything, including insects, seeds, honeydew, honey, bread, meats, nuts, ice cream and cheese. The species does not pose a public health risk, but can contaminate food and should be avoided [cite web |url=http://www.pestworld.org/Database/FactSheet.asp?ID=109&UserType=Consumers |publisher= |title=Pavement Ants, "Tetramorium caespitum"] .

These ants are easily controlled with the use of sugar baits laced with borax (boric acid).