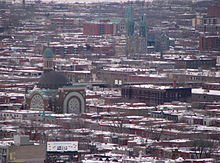 Mile End is a neighbourhood and municipal electoral district in the city of Montreal, Quebec, Canada. 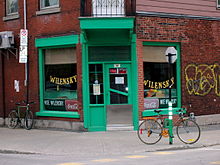 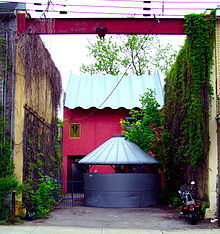 A distinctive residence on Clark street, May 2007.

Mile End since the 1980s has been known for its Anglophone culture and as an artistic neighbourhood, home to artists, musicians, writers, and filmmakers such as Arcade Fire, Adam Gollner, Grimes, Sean Michaels and Plants and Animals, etc. Many art galleries, designers' workshops, boutiques and cafés are found here. The computer graphics software house Discreet Logic made a mark on the area by renovating part of an old clothing factory in the early 1990s. In 1997, this space became the new Montreal studios of computer game developer Ubisoft, expanded since to take over much of the building. Mile End has become noticeably richer and more popular since the mid-90s: rents have increased and shops have become more upscale.

The writer Mordecai Richler grew up on Saint-Urbain Street in the 1930s and 40s, and wrote about the neighbourhood in several of his novels. Wilensky's Light Lunch, which is still open on Fairmount at Clark, features memorably in The Apprenticeship of Duddy Kravitz and the film based on it. William Shatner grew up in Mile End until he moved to Notre-Dame-de-Grâce during his high school years.

In 2005, Mile End was described in several music magazines, notably Spin and Pitchfork Media, as the heart of the independent music scene in Montreal. Several venues on Saint-Laurent Boulevard have contributed to the development of the local scene, including Casa del Popolo, the Sala Rossa, El Salon (now closed), and The Green Room (Le Salon Vert, recently burned down). In the 1980s there were Checkers and Club Soda on Park Avenue. Many indie labels such as Arbutus Records, Dare to Care Records / Grosse Boîte, Bonsound, Indica Records, Mindique, Constellation Records and the famous hotel2tango recording studio are also located in the Mile End. Independent record label Mile End Records is also named after the neighbourhood as one of the founders once lived there.

The area is also home to the city's two most famous bagel bakeries, Fairmount Bagel and St-Viateur Bagel.[1] 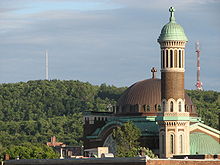 Nineteenth-century maps show the name Mile End as the crossroads at Saint Lawrence Road (now Boulevard) and what is now Mount Royal Avenue. Originally, this road was Côte Sainte-Catherine Road (heading west) and Côte Saint-Louis Road (heading east); later, a stretch of this road was known as Mile End Road.[3] It is probable that the name Mile End was inspired by the East London suburb of the same name. Contrary to popular belief, the place is not precisely a mile away from any official marker. It is, however, a mile north along Saint Lawrence Road from Sherbrooke Street. Furthermore it was 1-mile (1.6 km) along Saint Lawrence from Mount Royal Avenue (the Southern limit of the village) to the Mile End train station near Bernard street. In essence, the "Mile End" starts precisely where the "Golden Square Mile" ends.

As early as 1815, there was a Mile End Hotel and tavern, frequented by notables such as Stanley Bagg, an English businessman and landowner.[4] The earliest known printed references to Mile End are advertisements placed by Stanley Bagg, in both English and French, in The Gazette during the summer of 1815. He announced in July: "Farm for sale at St. Catherine [i.e., Outremont], near Mile End Tavern, about two miles from town...". On 7 August, he inserted the following:

STRAYED or STOLEN from the Pasture of Stanley Bagg, Mile End Tavern, on or about the end of June last, a Bay HORSE about ten years old, white face, and some white about the feet. Any person who will give information where the Thief or Horse may be found shall receive a reward of TEN DOLLARS and all reasonable charges paid. STANLEY BAGG. Montreal, Mile End, August 4, 1815.

A Notman photo of 1859[5] shows members of the Montreal Hunt Club setting out from Mile End Road.

Sections of Côte Saint Louis Road became known as Chemin des Tanneries (Tannery Road) and Chemin des Carrières (Quarry Road) because the road led to a tannery and to limestone quarries used for the construction of much of Montreal's architecture. The village of Côte Saint-Louis (incorporated 1846) sprung up near the quarries, its houses clustered east of the Mile End district around the present-day intersection of Berri Street and Laurier Avenue. It was to serve this village that a chapel of the Infant Jesus was established in 1848 near Saint Lawrence Road, on land donated by Pierre Beaubien.[6] In 1857-8, the chapel was replaced by the church of Saint Enfant Jésus du Mile End.[7] The church, made even more impressive by a new façade in 1901, was the first important building in what would become Mile End.

The coming of the railway

The transcontinental railway gave Mile End its first growth spurt and separate identity. In 1876,[8] the Quebec, Montreal, Ottawa and Occidental Railway came slicing through the area on its way from Dalhousie Station (in the east end of the old fortified city) to Sainte-Thérèse, Lachute, and Ottawa. This railway was bought in 1882 by the Canadian Pacific, and it was by this route that the first trains departed for the Prairies in 1885 and for Vancouver in 1887. Mile End Station was established in 1878 on the east side of Saint-Laurent Road, near what is now the intersection of Bernard Street.[9] (A much larger station was built in 1911;[10] it closed in 1931, when service was moved to the new Park Avenue Station (Jean-Talon), and was demolished at the end of the 1960s to make way for the Rosemont–Van Horne viaduct.)

The same year the railway station opened (1878) the village of Saint-Louis-du-Mile-End was incorporated, population 1319. Its territory consisted of the western third of Côte Saint-Louis: bounded on the west by the limit of Outremont (generally along Hutchison Street), on the south by what is now Mont-Royal Avenue, and on the east by a line running mostly just east of the current Henri-Julien Avenue. The northern border was north of present-day De Castelnau Street or just south of Jarry Park.

The second growth spurt of Mile End coincided with the electrification of tramway service in 1893; the area can be considered an example of a streetcar suburb. The agricultural and industrial exhibition grounds at the southwest of the village, near Mount Royal, were subdivided for housing. The village became a town in 1895 and changed its name to simply Saint-Louis. Apart from a tiny street located just outside the town's northwestern limit, and (for its remaining years) the railway station, the name Mile End passed out of the official toponymy for close to a century, coming back into use as a municipal electoral district only in the 1980s.

The town of Saint-Louis built in 1905 a magnificent town hall on the northwest corner of Saint-Laurent and what is now Laurier Avenue; the building still serves as a fire hall and firefighters' museum.[11] The town was annexed by the expanding city of Montreal on 29 May 1909,[12] taking effect as of 1 January 1910, and became Laurier Ward (quartier Laurier). Population growth had been explosive: in 1891, the village had 3537 residents; in 1911, after annexation, the ward's population was about 37,000.[13]

Perhaps the most recognizable architectural symbol of Mile End is the Church of St. Michael and St. Anthony[14][15] of 1914-5, on Saint-Viateur Street at the corner of Saint-Urbain. The church was built for a largely Irish Catholic community, as expressed by omnipresent shamrock motifs; yet the overall style of the building borrows more from the Byzantine than Western architectural traditions. Even more striking, the church has a slender tower that resembles a minaret. The building is now shared with the Polish Catholic parish of St. Anthony and masses are given in several languages.

The ethnic composition of Mile End changed constantly over the course of the twentieth century as the area became home to successive waves of new immigrants. Marianne Ackerman's series of articles on her 100 year old house[13] gives a vivid picture of the changing vocation of the neighbourhood.

The southern half of Mile End was first a bourgeois suburb,[16] then Montreal's principal Jewish area until the 1950s (later made famous by Mordecai Richler and others) and later home to Greek and Portuguese communities, among others. The Hassidic community has reestablished a visible Jewish presence in the Mile End and in neighbouring Outremont. After gaining a reputation as a neighbourhood of artists and musicians in the 1980s, the area has undergone gentrification since the late 1990s.

Parts of Mile End were heavily industrialized in the first half of the century because of the proximity of transportation by rail. Much of Mile End served as the heart of Montreal's garment district for many decades.

Municipal electoral reform in 1978 replaced the old wards with smaller, more uniformly sized districts and further reform in the 1980s grouped districts into boroughs (arrondissements). Within the borough of Plateau Mont Royal/Centre-Sud, the name Mile End was revived for a district covering essentially the part of the old Laurier Ward lying south of the railway tracks. This is the area that is now generally associated with the name. The electoral district was expanded eastward to Saint Denis Street in 2001 (the borough having been renamed Le Plateau Mont Royal) and as far as Laurier Park in 2005, so that it now includes the historic centre of the village of Côte Saint-Louis. Most of the former northern half of Saint Louis du Mile End now lies within the Saint Édouard district of the borough of Rosemont–La Petite-Patrie.