Flag of the Czech Republic

When the Czech and Slovak Republics separated in 1993, the Czechs adopted a flag identical to the former flag of the Czech and Slovak Federal Republic, in direct violation of the constitutional act that explicitly forbids former federal symbols to be used by the two successor states.[1]

Flag of Protectorate of Bohemia and Moravia 1939-45

The author of the flag is Jaroslav Kursa (1875–1950),[2] an archivist of the Department of Home Affairs, as the original author of the present flag appearance. The flag contains red and white colors derived from the ancient Coat of arms of Bohemia; because the flag was almost identical with the Polish flag and had the same colors as the Austrian flag, a blue wedge was added in 1920 (The version without the wedge is identical to the flag of Bohemia).

The flag was officially approved by the National Assembly of Czechoslovakia (ČSR) on 30 March 1920. Since then, it has been used continuously, excluding the World War II occupation years.[3] During the Prague Spring (1968) and the Velvet Revolution (1989) the flag served as the dominant symbol of national unity.

During the 1992 negotiations about the details of dissolution of Czechoslovakia, on demand by Vladimír Mečiar and Václav Klaus, a clause forbidding use of state symbols of Czechoslovakia by successor states was inserted into the Law about dissolution of ČSFR. From 1990 to 1992, the red and white Flag of Bohemia (differing from the Polish flag only by proportion of the colours) officially served as the flag of the Czech Republic. Eventually, after a search for new symbology the Czech Republic decided to keep the Czechoslovak flag with an altered meaning, and this was accepted by prominent Slovak vexillologists[citation needed]. 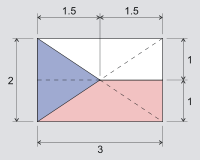 The blazon of this flag is per pall fesswise Argent, Azure, and Gules. The flag is formed from an isosceles triangle that extends halfway along the rectangle (a common mistake is to draw it shorter) and two bands: one white and one red.