Mishkeegogamang First Nation, also known as New Osnaburgh, Osnaburgh House, Osnaburgh or "Oz" for short, is an Ojibwa First Nation in the Canadian province of Ontario. It is located on Highway 599 in the Kenora District, approximately 20 kilometres south of Pickle Lake. In September, 2007, its total registered population was 1,535, of which the on-reserve population was 866. Though at one time a member of the Windigo First Nations Council, Mishkeegogamang First Nation today is not part of any regional tribal councils; however, they have retained their membership with the Nishnawbe Aski Nation. 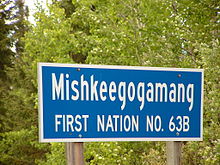 The Mishkeegogamang First Nation's landbase consists of two reserves, the smaller 5018.6 ha Osnaburgh 63A Indian Reserve and the larger 13677.8 ha Osnaburgh 63B Indian Reserve. In addition, Oz is made up of separate and somewhat geographically disconnected communities. On their main reserve are the communities of Bottle Hill, Poplar Heights and Sandy Road. A community about 15 miles south from the reserve called Ten Houses is also associated with this First Nation. Additionally, few other small communities called Doghole Bay, Eric Lake, Ace Lake and a few others are also associated with Oz.

Mishkeegogamang is policed by the Nishnawbe-Aski Police Service, an Aboriginal based service.