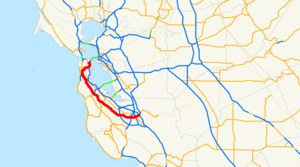 Interstate 280 (I-280) is a 57 mile (92 km) long interstate in the metropolitan area of Northern . The freeway runs from the US 101/Interstate 680 interchange in San Jose to the South of Market area in San Francisco, just south of , home of the baseball team. It and I-680 form a partial around the Bay Area.

I-280 beginning at its interchange with State Route 1 in was built and dedicated as the Junipero Serra Freeway. One of the dedication signs (in Daly City) still indicates that the Junipero Serra Freeway is known as the "World's Most Beautiful Freeway" due to its scenic route though the . The portion of Interstate 280 between and is also named the Sinclair Freeway. [http://www.dot.ca.gov/hq/tsip/hseb/products/Named_Freeways.pdf]

In between San Jose and San Francisco, Interstate 280 passes through Santa Clara, Cupertino, Los Altos and Los Altos Hills before it settles along its scenic route just to the west of the cities of the in San Mateo County and just to the east of the . I-280 re-emerges in a decidedly urbanized area in the city of San Bruno, passing through South San Francisco and Daly City before it runs across a southeastern swath of the city of San Francisco on the way to its northern terminus.

The segment of the Junipero Serra Freeway between Cupertino and Daly City, has been called the "World's Most Beautiful Freeway" since its dedication in the 1960s. Drivers along this portion of Interstate 280 are treated to scenic views of the Santa Cruz Mountains to the west and San Francisco Bay to the east, and are isolated by hills from the cities to the east. Through much of this segment, the freeway is actually running just inside the eastern rim of the canyon of the . A particularly attractive six mile (ten ) stretch of the freeway from Hillsborough to Belmont provides a beautiful look at , formed by water piped hundreds of miles from in , filling the bottom of the fault canyon.

For nearly all of its length, Interstate 280 runs roughly parallel and several miles to the west of US 101 (the ). Both freeways are north-south routes connecting San Jose with San Francisco; however, unlike I-280, the route that US 101 takes between the two cities goes entirely through urbanized areas. The majority of the population of the San Francisco Peninsula lives somewhere between Interstate 280 and US 101.Fact|date=February 2007

I-280 never intersects with Interstate 80, its parent interstate. The northern terminus of I-280 is within about a mile of I-80's western terminus (at the approach to the ), but the two interstates do not actually intersect. Although San Francisco has had several opportunities to connect I-280 to I-80, it has chosen to use the money for other purposes. Connecting the two freeways is considered to be politically and financially infeasible at this time, due to the city's strong anti-freeway stance. Instead, 280's northernmost extension primarily functions as a spur into Downtown San Francisco, as suggested by signage on northbound US 101 at its San Francisco interchange with 280 "(see history section below)".

Most of Interstate 280, from San Jose to Daly City, is designated as the Junipero Serra Freeway in honor of Spanish missionary , who founded many of California's missions in the 18th century. A 26-foot (8 ) high "faux"-sandstone statue of Father Serra kneeling and pointing over the freeway is located at a highway rest area just north of the Highway 92 intersection between the Bunker Hill Drive and Black Mountain Road exits on northbound I-280 in Hillsborough, and can be clearly seen by drivers in both directions. The segment of Interstate 280 north of Route 1 in San Francisco was originally named the Southern Freeway, but has since been officially renamed the John F. Foran Freeway. However, most San Franciscans still refer to it as the Southern Freeway. The section of I-280 between the James Lick Freeway and its end at Third Street and King Street is called the Southern Embarcadero Freeway.

Interstate 280 was added to the on , as a route from San Jose north to San Francisco. This ran along the present alignment of I-280 south of San Francisco, but in San Francisco it ran north parallel to State Route 1, past the planned west end of Interstate 80, to the south approach to the . At that point, Interstate 480 began and headed east on (U.S. Route 101), the Golden Gate Freeway, and onto the Embarcadero Freeway to reach the . I-480 would continue south on the never-built Southern Embarcadero Freeway to meet the Southern Freeway (now I-280), and meet up with I-280 again near the , which served as the 101A Bypass until I-280 was built. The I-280 number was approved on , .

In the 1964 renumbering, the Route 280 designation was officially applied to the planned route. This replaced SR 1 in San Francisco; the new SR 1 alignment turned northeast where I-280 now runs, quickly ending at State Route 82 (San Jose Avenue/). SR 1 however continued to be signed along its former (and current) alignment, which had not been upgraded to standards.

A realignment approved January took I-280 onto its current route. This ran along what had been SR 1, SR 82, State Route 87 and I-480 (downgraded to a State Route then), ending at Interstate 80 at the west end of the Bay Bridge. This change was made on the state level in 1968, restoring SR 1 to its current alignment and truncating SR 82, SR 87 and SR 480.

The section of I-280 between SR 92 (San Mateo) and SR 84 (Woodside) was not completed until the 1970s. Until then, traffic was routed on Cañada road between the two ends.Fact|date=February 2008

The short piece of I-280 between 3rd Street and SR 480 in downtown San Francisco was never built, and the piece from 3rd Street south to U.S. Route 101 was reconstructed after it was damaged by the 1989 . The piece between SR 480 and I-80 was torn down along with the rest of the ; all that remains of the I-80 interchange is a few s, which will be removed as part of the Western Approach reconstruction project.