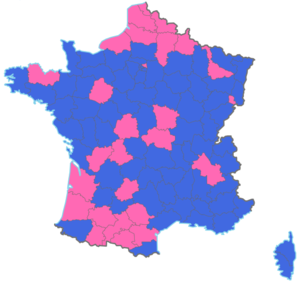 Presidential elections took place in on 23 April and 7 May 1995, to elect the fifth president of the Fifth Republic. The incumbent Socialist president, , did not stand for a third term. He was 78, had cancer, and his party had lost the previous legislative election in a landslide defeat. Since 1993, he had been "cohabiting" with a conservative cabinet led by , a member of the Neo-Gaullist RPR. Balladur had promised the leader of the RPR, , that he would not run for the presidency, but as polls showed him doing well and he had the support of many conservative politicians, he decided to run. The competition within the right between Balladur and Chirac was a major component of the campaign.

Meanwhile, the left was weakened by scandals and disappointments regarding Mitterrand's presidency. In June 1994, former Prime Minister was dismissed as head of Socialist Party (PS) after the party's poor showing in the European Parliament election. Then, decided not to stand as a candidate because he disagreed with the re-alignment on the left orchestrated by new party leader . This left the field wide open for numerous potential candidacies: among those who are known to have considered a run, or were strongly urged by others, are , , , and . Former education minister was chosen by PS members as the party's candidate in a primary election pitting him against Henri Emmanuelli. He promised to restore the credibility and moral reputation of his party, but his chances of winning were seen as being thin.

The (PCF) tried to stop its electoral decline. Its new leader campaigned against "king money" and wanted to represent a renewed communism. He was faced with competition for the far left vote by the candidacy of , who ran for the fourth time. Both of these candidates had a better result than their parties had in 1988, but came nowhere near being able to participate in the next round. In choosing , the Greens opted for their integration with the left.

On the far-right, tried to repeat his surprising result that he obtained in the previous presidential election. His main rival for the far-right vote was , candidate of the euro-sceptic parliamentary right.

In January 1995, when he announced his candidacy, Balladur was the favorite of the political right. According to the polls institute, he held an advantage of 14 points over Chirac (32% against 18% for the first round). He took advantage of his "positive assessment" as Prime Minister and advocated a moderately liberal economic policy. Chirac denounced the "social fracture" and criticized the "dominant thought", targeting Balladur. Chirac argued, "the pay slip is not the enemy of employment". Indeed, unemployment was the main theme of the campaign. From the start of March, Chirac gained ground on Balladur in the polls.

Chirac's campaign slogan was "France for everyone"; Balladur's: "Believe in France"; and Jospin's: "A clear vote for a more just France".

Lionel Jospin lead in the first round, in what appeared to be an electoral recovery for the Socialist Party. His right-wing challenger for the second round was Jacques Chirac and not Edouard Balladur. Defeated, Balladur endorsed the RPR candidate. Jean-Marie Le Pen repeated his good result of the previous presidential election.

During the TV debate between the two finalists, they disagreed about the presidential term. Jospin wanted to reduce it to 5 years whereas Chirac was in favour of the 7-year term. The PS candidate responded: "the choice is 5 years with me or 7 years with Jacques Chirac, which will be very long". Eventually, the presidential term was reduced to 5 years after the 2002 election.

* [http://www.ina.fr/archivespourtous/index.php?vue=notice&from=tl__ogp_int_parcours&num_notice=5&id_notice=CAB95028272] Radio-TV debate Jacques Chirac/Lionel Jospin
* [http://www.ina.fr/archivespourtous/index.php?vue=notice&from=tl__ogp_int_parcours&num_notice=7&id_notice=CAB05011287] Announcement of the result of the second round, on TV