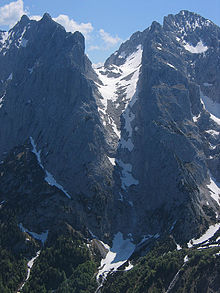 A couloir (from the French word meaning "passage" or "corridor,") is a narrow gully with a steep gradient in a mountainous terrain.[1] A couloir may be a seam, scar, or fissure, or vertical crevasse in an otherwise solid mountain mass. Though often hemmed-in by sheer cliff walls, couloirs may also be less well-defined, often simply being a line of broken talus or scree ascending the mountainside and bordered by trees or other natural features. Couloirs are especially significant in winter months when they may be filled in with snow or ice, becoming much more noticeable than in warmer months when the majority of the snow and ice may recede. These physical features make the use of couloirs popular for both skiing and mountaineering.

While in the United States such terrain features are uncommon on ski resorts, they are more common in Europe. Couloirs are frequently considered an off-piste trail and as such are not marked on ski piste maps. Some exceptions to this include the Grand Couloir in Courchevel, France which has historically variable classifications, but is now graded as a black run under French piste difficulty grading. The Massif du Mont Blanc has many well-known, celebrated, and frequently visited couloirs, Gervasutti Couloir, Breche Nonne Couloir, the Chevalier and Cosmiques couloirs are a few. Jackson Hole Mountain Resort has a famous and challenging couloir called Corbet's Couloir. Sugar Bowl Ski Resort in California has a run called Nancy's Couloir. Big Sky Resort in Montana has a run called "Big Couloir" at 50 degree pitch for over 1,000 feet of vertical is one of the most intense in-bounds trails in America. The lesser-know Little Couloir, located just to the side of Big Couloir, has an even steeper pitch between 50 and 55 degrees. Another exception is the double black diamond run on Blackcomb Mountain in Whistler, British Columbia, Canada "Couloir Extreme," which is located inside the Whistler-Blackcomb resort boundaries and can be accessed via chairlift.