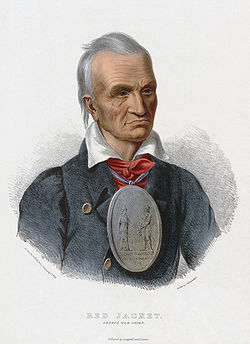 Red Jacket from an 1835 lithograph by Henry Corbould, after a painting by Charles Bird King, printed by Charles Joseph Hullmandel.

Red Jacket (known as Otetiani in his youth and Sagoyewatha after 1780) (c. 1750–January 20, 1830) was a Native American Seneca orator and chief of the Wolf clan.[1] He negotiated on behalf of his nation with the new United States after the American Revolutionary War, when the Seneca as British allies were forced to cede much land, and signed the Treaty of Canandaigua. He helped secure some Seneca territory in New York state. His talk on "Religion for the White Man and the Red" (1805) has been preserved as an example of his great oratorical style.

Red Jacket's birthplace has long been a matter of debate. Some historians claim he was born at the Old Seneca Castle near present-day Geneva, New York, near the foot of Seneca Lake.[2] Others believe he was born near Cayuga Lake and present-day Canoga,[3] while others place his birth south of Branchport, on Keuka Lake near the mouth of Basswood Creek.[4][5] It is known that he spent much of his youth at Basswood Creek, and his mother was buried there after her death.

Red Jacket lived much of his adult life in Seneca territory in the Genesee River Valley. He and the Mohawk chief Joseph Brant were bitter enemies and rivals, although they often met together at the Iroquois Confederacy's Longhouse. During the American Revolutionary War, when both Iroquois nations were allies of the British, Brant contemptuously referred to Red Jacket as "cow killer," alleging that at the Battle of Newtown in 1779, Red Jacket killed a cow and used the blood to claim he had killed an American rebel.[6] 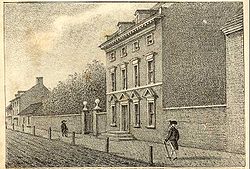 Red Jacket became famous as an orator, speaking for the rights of his people. He played a prominent role in negotiations with the new United States federal government after the war. In 1792 he led a delegation of 50 people to Philadelphia. The US president George Washington presented him with a special "peace medal", a large oval of silver plate engraved with an image of Washington on the right-hand side shaking Red Jacket's hand; below was inscribed "George Washington", "Red Jacket", and "1792". Red Jacket wore this medal on his chest in every portrait painted of him. (Today the medal is held in the collection of the Buffalo and Erie County Historical Society.[7]) In 1794, Red Jacket was a signatory, along with Cornplanter and fifty other Iroquois leaders, of the Treaty of Canandaigua by which they were forced to cede much of their land.[8] It confirmed peace with the United States, as well as the boundaries of the postwar the Phelps and Gorham Purchase (1788) of most of the Seneca land east of the Genesee River in western New York.

In 1797, by the Treaty of Big Tree, Robert Morris purchased rights from the Seneca for $100,000 to some lands west of Genesee River. (This area is present-day Geneseo in Livingston County). Red Jacket had tried to prevent the sale but, not able to convince the other chiefs, he gave up his opposition. As often occurred, Morris used gifts of liquor to the Seneca men and trinkets to the women to "grease" the sale.[citation needed] Morris had previously purchased the land from Massachusetts, subject to the Indian title, then sold it to the Holland Land Company for speculative development. He retained only the Morris Reserve, an estate near present-day Rochester. During the negotiations, Brant told an insulting story about Red Jacket, but Cornplanter intervened and prevented the leader from attacking and killing Brant.[9]

Red Jacket took this name, one of several he used, for a highly favored embroidered coat given to him by the British for his wartime services.[10] The Seneca were allied with the British Crown during the American Revolution, both because of long trading relationships and in the hope they could limit colonial encroachment on their territory. After their ally lost, the Seneca were forced to cede much of their territory. In the War of 1812, Red Jacket supported the American side.[11]

His later adult name, Segoyewatha, which roughly translates as "he keeps them awake," was given by the Seneca about 1780 in recognition of his oratory skill. When in 1805 Mr. Cram, a New England missionary, asked to do mission work among the Seneca, Red Jacket responded expressing how the Seneca had suffered at the hands of Europeans. His "Religion for the White Man and the Red" further expressed his profound belief that Native American religion was fitting and sufficient for Seneca and Native American culture. It has been documented and preserved as one of the best examples of oratory.[12]

Red Jacket developed a problem with alcohol and deeply regretted having taken his first drink (see following quote). Asked if he had children, Red Jacket, who had lost most of his offspring to illness, said:

"Red Jacket was once a great man, and in favor with the Great Spirit. He was a lofty pine among the smaller trees of the forest. But, after years of glory, he degraded himself by drinking the firewater of the white man. The Great Spirit has looked upon him in anger, and his lightning has stripped the pine of its branches."[13]

In his later years, Segoyewatha lived in Buffalo, New York. On his death, his remains were buried in an Indian cemetery. In 1876, William C. Bryant presented a plan to the Council of the Seneca Nation to rebury Red Jacket's remains in Forest Lawn Cemetery, Buffalo.[14] This was carried out on 9 October 1884. The proceedings, with papers by Horatio Hale, General Ely S. Parker, and others, were published (Buffalo, 1884).[11]

According to Appletons' Cyclopædia of American Biography, "Several portraits were made of him. George Catlin painted him twice, Henry Inman once, and Robert W. Weir did his portrait in 1828, when Red Jacket was on a visit to New York City. Fitz-Greene Halleck has celebrated him in song."[11]

A variety of structures, ships and places were named in his honor, especially in the Finger Lakes region and Buffalo: