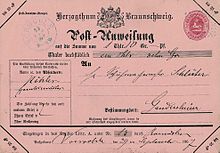 A money order is a payment order for a pre-specified amount of money. Because it is required that the funds be prepaid for the amount shown on it, it is a more trusted method of payment than a personal check.

The money order system was established by a private firm in Great Britain in 1792, and was expensive and not very successful. In approximately 1836, it was sold to another private firm which lowered the fees, which therefore significantly increased the popularity and usage of the system. The Post Office noted the success and profitability, and it took over the system in 1838. Fees were further reduced and usage increased further, making the money order system reasonably profitable. The only draw-back was the need to send an advance to the paying Post Office before payment could be tendered to the recipient of the order. This drawback was likely the primary incentive for establishment of the Postal Order System on 1 January 1881.[1]

A money order is purchased for the amount desired. In this way it is similar to a certified cheque. The main difference is that money orders are usually limited in maximum face value to some specified figure (for example, the United States Postal Service limits domestic postal money orders to US $1,000.00 as of July 2008[update]) while certified checks are not. Money orders typically consist of two portions: the negotiable check for remittance to the payee, and a receipt or stub that the customer retains for his/her records. The amount is printed by machine or checkwriter on both portions, and similar documentation, either as a third hard copy or in electronic form and retained at the issuer and agent locations.

Money orders have limited acceptance in the insurance and brokerage industry because of concerns over money laundering. Because of provisions within the USA PATRIOT Act and the Bank Secrecy Act, money orders have far more regulatory processing requirements than personal checks, cashier's checks, or certified checks. Thus, most brokerage firms, insurance firms, and even many banks will not accept them as payment.[citation needed]

As of 2006, there has been a significant increase in counterfeit postal money orders. Often, such a counterfeit will be sent to an unwitting victim who is instructed, on some pretext, to deposit it at his/her bank and return some of the funds. The victim is more likely to trust an “official” money order than a regular check, for the reasons given above. However, because money orders are paid through the postal service rather than the usual check clearing system, they often take longer to “bounce” than an ordinary check. When this finally occurs it is charged back to the victim, who may already have sent back the funds, for which he or she must take the loss. For this reason banks are now applying increased security to incoming money orders, and are becoming more reluctant to accept them. A safer approach is to cash them at a post office. In this case, the authenticity of the item is immediately determined, and if deemed good, the holder is paid and absolved of further responsibility for the funds.

Money orders around the world

In India, a money order is a service provided by the Indian Postal Service. A payer who wants to send money to a payee pays the amount and a small commission at a post office and receives a receipt for the same. The amount is then delivered as cash to the payee after a few days by a postal employee, at the address specified by the payer. A receipt from the payee is collected and delivered back to the payer at his address. This is more reliable and safer than sending cash in the mail.

It is commonly used for transferring funds to a payee who is in a remote, rural area, where banks may not be conveniently accessible or where many people may not use a bank account at all. Money orders are the most economical way of sending money in India for small amounts.[2]

Postal Money Orders (PMOs) are generally regarded as one of the most difficult financial documents to counterfeit.

Money orders were originally issued by the U.S. Postal Service as an alternative to sending cash through the postal system for those who did not have current accounts. They were later offered by many more vendors than just the postal service as a means to pay bills and send money internationally where there were not reliable banking or postal systems. Companies that now offer money orders include 7-11, QuikTrip, Cumberland Farms, Safeway, Western Union, MoneyGram, CVS, and Wal-Mart.

Obtaining a money order in the US is simple, as they can be purchased with any form of money at any post office, and are sold at many other locations.[3]

Due to the increased public awareness of fraudulent US Postal Money Orders, counterfeiters are using these US Postal and other companies' (see above) money orders to dupe their victims. By obtaining their "mark's" postal zip code, they will draft bogus money orders based on whichever franchises will most likely be in their victim's home area as the familiarity of the store's name offers a sense of security.

Furthermore, money orders are subject to erasing the name and writing in somebody else's name. Money order fraud is specifically not reimbursed by Western Union and the victim is required to go through local police to attempt to recover lost funds. In response, the perpetrator who cashed the money order can simply claim "identity theft" to the investigating detective. Money orders for this purpose can be obtained from places like rent drop boxes.

When purchasing an international money order, it is important to ensure that the specific type of money order is acceptable in the destination country. Several countries are very strict that the money order be on pink and yellow paper and have the words "international postal money order." In particular, the Japan Post (one of the largest banking institutions in the world) requires these features. Most other countries have taken this as a standard when there is any doubt of a document's authenticity.

In the last decade a number of electronic alternatives to money orders have emerged and have, in some cases, supplanted money orders as the preferred cash transmission method. Many of these alternatives use the ubiquitous Visa/MasterCard payment systems to settle transactions. In Japan, the konbini system enables cash to cash transfers and is available at many of the thousands of convenience stores located in the country. In Italy the PostePay system offered through the Italian post office. In Ireland, 3V is offered through mobile top-up locations, and in the United States, PaidByCash is offered at 60,000 grocery and convenience stores. In the United Kingdom a number of credit card providers have started to provide pre-paid credit cards. These cards can be "topped-up" at any location that uses the Pay-Point system and also at the Post Office for the Post Office card. PayPal has their own branded pre-paid card which can be "topped-up" using a PayPal account, Pay-Points and at the Post Office.