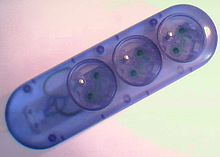 A power strip (also known as an extension block, power board and by many other variations) is a block of electrical sockets that attaches to the end of a flexible cable and allows multiple electrical devices to be plugged in. As such it can be considered a type of trailing socket though that term is more often used for single and double cable mounted sockets. The term is also used to refer to the complete assembly with the power strip on one end and a plug on the other. Power strips are often used when many electrical devices are in proximity, such as for audio/video and computer systems. Power strips often include a circuit breaker to safely limit the electric power flowing through them. 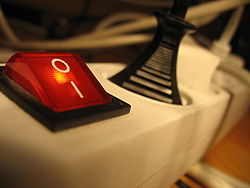 Power strips can include a switch to turn all devices on and off. Some have outlets which are individually switched. "Master/slave" strips can detect one "master" device being turned on or off (say the PC itself in a computer setup) and turn everything else on or off. Remote control strips allow a group of devices to be switched remotely.

Many power strips have a neon or LED indicator light or one per output socket to show when power is on. Better-quality surge-protected strips often have additional lights to indicate the status of the surge protection system.

Overload protection is different from surge protection. Some power strips only have overload protection, which does not protect from electricity spikes (surges); it only means that the device will trip itself when devices are plugged into it are taking more power than the strip is rated to supply. For example, the standard rating for overload protected powerboards is 2400W in Australia, and exceeding that power will make the board trip.

Some power strips have energy-saving features, which switch off the strip if appliances go into standby mode. Using a sensor circuit, they detect if the level of current flowing through the socket is in standby mode (less than 30 watts), and then they will turn off that socket. This reduces the consumption of standby power used by computer peripherals and other equipment when not in use, saving money and energy. Some more-sophisticated power strips have a master and slave socket arrangement, and when the "master" socket detects standby mode in the attached appliance's current it turns off the whole strip.

However, there can be problems in detecting standby power in appliances that use more power in standby mode (e.g. plasma televisions) and are thus not turned off in the desired way. When using a master–slave power strip, one way to avoid such problems is to plug an appliance with a lower standby wattage (like a DVD player) into the master socket, using it as the master control instead.

Also it is recommended that appliances that need a controlled shutdown sequence (e.g. many ink-jet printers) not be plugged into such a strip as it can damage them. It is better use the appliance's own power switch to initiate a proper shutdown sequence.

Within Europe, power strips with energy-saving features are within the scope of the Low Voltage Directive 2006/95/EC and the EMC Directive 2004/108/EC and require CE Marking.

In some countries where multiple socket types are in use, a single power strip can have two or more kinds of socket.

If sockets on a power strip are grouped closely together, a cable with a large "wall wart" transformer at its end may cover up multiple sockets. Various designs address this problem, some by simply increasing the spacing between outlets. Other designs include receptacles which rotate in their housing, or multiple short receptacle cords feeding from a central hub. A simple DIY method for adapting problematic power strips arrangements to large "wall warts" is to use a three-way socket adapter to extend the socket above its neighbors, providing the required clearance.[1]

Surge suppression is usually provided by one or more metal-oxide varistors (MOVs), which are inexpensive two-terminal semiconductors. These act as very high speed switches, momentarily limiting the peak voltage across their terminals. By design, MOV surge limiters are selected to trigger at a voltage somewhat above the local mains supply voltage, so that they do not clip normal voltage peaks, but clip abnormal higher voltages. In the US, this is (nominally) 120 VAC. It should be borne in mind that this voltage specification is RMS, not peak, and also that it is only a nominal value.

In most of the developed world, mains electrical circuits are (supposed to be) grounded (earthed), so there will be a live wire, a neutral wire, and a ground wire. Power strips often come with only one MOV mounted between the live and neutral wires. More complete (and desirable) power strips will have three MOVs, mounted between each possible pair of wires. Since MOVs degrade somewhat each time they are triggered, power strips using them have a limited, and unpredictable, protective life.

More elaborate power strips may use inductor-capacitor networks to achieve a similar effect of protecting equipment from high voltage spikes on the mains circuit. These more expensive arrangements are less prone to silent degradation than MOVs.

Connecting Power Strips in a daisy chain does not necessarily increase the protection they provide.[2] Connecting them in this manner connects their surge protection trips in parallel, spreading any potential surge across each surge protector. However, due to manufacturing tolerances of the MOVs, the surge will not be spread evenly and will typically go through the one that trips first. A single surge protector with a higher surge rating is more effective and has a longer lifetime. 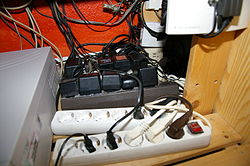 Overloading can be a problem with any sort of power distribution adaptor. This is especially likely if multiple appliances with heating elements, such as electric room heaters or benchtop cooking appliances like electric frying pans are plugged into a power strip or similar device.

In the US and some other countries, power strips generally have a circuit breaker integrated to prevent overload. In the UK, power strips are required to be protected by the fuse in the BS 1363 plug. Some also feature a 13A BS1362 fuse in the socket end. While this is not much use if they are being fed with a 13A plug it can be very helpful for providing safe protection to adaptor leads from a higher current plug type.

Power strips are generally considered a safer alternative to "double adaptors", "two-way plugs", "three-way plugs" or "cube taps" which plug directly into the socket with no lead for multiple appliances. These low-cost adaptors are generally not fused (although more modern adaptors in the UK and Ireland are). Therefore in many cases the only protection against overload is the circuit fuse which may well have a rating higher than the adaptor. The weight of the plugs pulling on the adapter (and often pulling it part way out of the socket) can also be an issue if adaptors are stacked or if they are used with brick-style power supplies. Such adaptors, while still available, have largely fallen out of use in some countries (two and three-way adaptors are common in the UK and Ireland).

When plugging a device into a power strip, a build up of carbon can cause sparking to occur. This generally doesn't pose much of a risk, but it can bother some people.

US power strip with switch

In 1972, the electrical "power-board" was invented by Australian electrical engineer Peter Talbot working under Frank Bannigan, Managing Director of Australian company Kambrook. The product was hugely successful, however, it was not patented and market share was eventually lost to other manufacturers.[3]