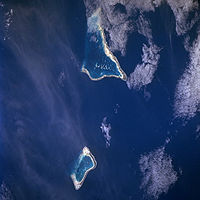 Maiana Atoll can be seen on the bottom of this photograph, with the larger formation being Tarawa Atoll
Main articles: Kiribati and Gilbert Islands

Maiana is a district of Kiribati and an atoll in the North Gilbert Islands. The north and eastern sides of the atoll are a single island whilst the western edge consists of submerged reefs, all surrounding a lagoon. The atoll is 14 km long and 9.5 km wide.

In the late 19th century, Maiana was, for a while, compelled to pay tribute to the king of Abemama, Tembinok'.

Maiana is also a parliamentary constituency for the national House of Assembly. It currently elects two representatives. At present, the MPs for Maiana are Dr Anote Tong and Teiwaki Areieta.[1] Tong is also the President of Kiribati.