Coat of arms of Bolivia

Coat of arms of Bolivia 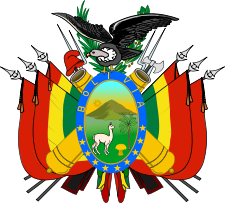 The coat of arms of Bolivia has a central cartouche surrounded by Bolivian flags, muskets, laurel branches, and has an Andean condor on top.

The central cartouche has a border with ten stars in the bottom, which symbolize the nine Departamentos and the former province Litoral that was taken over by Chile in 1879, and the name of Bolivia in the top section. Within the border the silver mountain Potosí — recognized by a mine entrance — is depicted, with a sun rising above it, and with an alpaca standing next to a palm tree and some wheat. The alpaca stands on a plain that contrasts with the mountain. The mountain and its contrast with the plains are indicative of the geography of Bolivia. The alpaca is the national animal, and the items next to it are symbolic of the resources of the nation.

Around the shield there are three Bolivian flags on each side. Behind these are two pairs of crossed rifles that symbolize the struggle for independence. Next to the muskets there are an axe and a red Phrygian hood, which is the symbol of liberty and freedom. The laurel branches are symbolic of peace, and the condor perched upon the shield is symbolic of a willingness to defend the nation and its liberty.

In some depictions of these coat of arms, the two pairs of muskets are replaced by two cannons. Other depictions also have more realistic symbols in the shield.