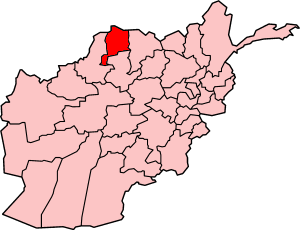 Jowzjān or Jōzjān (PerB|جوزجان) is one of the thirty-four . It is in the north of the country. Its capital is .

On May 28, 2007, a clash between protestors and police in Sheberghan resulted in the death of six protestors, extensive property damage to government buildings and injuries to over thirty protestors and policemen. [http://pajhwok.com/viewstory.asp?lng=eng&id=36991] The fatal protest was part of a power clash between the northern general and politician and other politicians in the province, particularly the Governor who is widely unliked among local population and MP , who had just survived an assassination attempt a few days previous that he blamed on Dostum. [http://news.bbc.co.uk/2/hi/south_asia/6708773.stm] [http://pajhwok.com/viewstory.asp?lng=eng&id=37216]

The current Governor of the province is .

The population is mostly and .

* Abu Ubaid al-Juzjani, the famous pupil of , was from Jōzjān.