Coat of arms of Australia

Coat of arms of Australia

The coat of arms of Australia (formally known as Commonwealth Coat of Arms) is the official symbol of Australia. The initial coat of arms was granted by King Edward VII on 7 May 1908, and the current version was granted by King George V on 19 September 1912, although the 1908 version continued to be used in some contexts, notably appearing on the sixpenny coin until 1966. 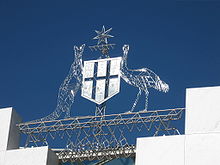 The coat of arms above the main entrance of Parliament House, Canberra.

The shield is the focal point of the coat of arms, contained within is the badge of each Australian state. In the top half, from left to right, the states represented are: New South Wales, Victoria, and Queensland. In the bottom half, from left to right: South Australia, Western Australia, and Tasmania. Above the shield is the seven-pointed 'Commonwealth Star' or 'Star of Federation' above a blue and gold wreath, forming the crest. Six of the points on the star represent the original six states, while the seventh point represents the combined territories and any future states of Australia. In its entirety the shield represents the federation of Australia.

The Red Kangaroo and Emu that support the shield are the unofficial animal emblems of the nation. They owe this recognition to the fact that they are native Australian fauna, (found only on that continent), and likely chosen because they are the most well-known native Australian animals large enough to be positioned together in scale holding up the shield. It is often claimed these animals were chosen because neither animal can move backward, only forward - i.e. progress. In reality both animals can move backwards, but infrequently do. In the background is wreath of Golden Wattle, the official national floral emblem, though the representation of the species is not botanically accurate.[1] At the bottom of the coat of arms is a scroll that contains the name of the nation. Neither the wreath of wattle nor the scroll are technically part of the official design described on the Royal Warrant that grants the armorial design.

Quarterly of six, the first quarter Argent a Cross Gules charged with a Lion passant guardant between on each limb a Mullet of eight points Or; the second Azure five Mullets, one of eight, two of seven, one of six and one of five points of the first (representing the Constellation of the Southern Cross) ensigned with an Imperial Crown proper; the third of the first a Maltese Cross of the fourth, surmounted by a like Imperial Crown; the fourth of the third, on a Perch wreathed Vert and Gules an Australian Piping Shrike displayed also proper; the fifth also Or a Swan naiant to the sinister Sable; the last of the first, a Lion passant of the second, the whole within a Bordure Ermine; for the Crest on a Wreath Or and Azure A Seven-pointed Star Or, and for Supporters dexter a Kangaroo, sinister an Emu, both proper.[2]

Bowman Flag 1806 depicts the Emu and Kangaroo as supporters 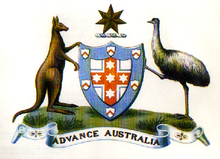 Following the federation of Australia, the first official coat of arms of Australia was granted by King Edward VII on 7 May 1908.[3] The original design is thought to have been inspired by the 1805 Bowman Flag, which showed a coat of arms of the rose, shamrock and thistle supported by a kangaroo and emu.[4]

It consisted of a shield in the centre, the seven pointed star on a wreath as the crest above it, and a Kangaroo and an Emu supporting the shield, all on a bed of green grass with a scroll containing the motto "Advance Australia". The selection of the kangaroo, the Emu and the words, "Advance Australia" was tied together symbolically. The shield had a white background, with a red cross of Saint George, blue lines outside the cross, and a blue border containing six inescutcheons featuring a red chevron on white, representing the six states. The Scottish Patriotic Association was vocally opposed to the shields designing, noting that it should display the Union Flag to represent British and Irish settlers. These arms were used by the government and appeared on the sixpence coin from 1910 until 1963, and the threepence, shilling and florin from 1910 to 1936.

The 1908 arms were redesigned in 1911, and officially granted by George V on 19 September 1912. The redesign of the coat of arms spurred much debate in the Parliament. The Member for Wentworth, William Kelly MP, said:

"The emu and kangaroo are so built that they hardly fit into the heraldic atmosphere, and I think we make ourselves ridiculous when we endeavour to carry on the traditions of the Old World with some of the wild creations of our Australian fauna."[5]

Despite objections, the kangaroo and emu remained the shield bearers in the new coat of arms and were modified to appear more realistic. The principal reason for the redesign was to address concerns that Australia's states were not individually represented; this was achieved by showing each state's badge on the shield. The 1912 coat of arms removed the bed of grass that was beneath the shield and changed the scroll to read simply "Australia". The colours in the wreath were also changed from blue and white to blue and gold. A background of two sprays of Golden Wattle was added, however it does not form a part of the armorial bearings. The Golden Wattle was proclaimed Australia's national flower on 19 August 1988 by the Governor-General Sir Ninian Stephen.[6]

Symbols of Australia’s six states appear on the shield:

The coat of arms is used to identify Australian government authority and property and accordingly the coat of arms should never be used where it could wrongly imply a formal guarantee, sponsorship or endorsement by the Commonwealth.[7] Use of the arms by private citizens or organisations is rarely permitted, however there are provisions for use by sporting bodies and in educational publications. Use of the coat of arms without permission may be in breach of Sections 53 (c) (d) and (e) of the Trade Practices Act 1974, Section 145.1 of the Criminal Code Act 1995 or Section 39(2) of the Trade Marks Act 1995.[8] The import of goods bearing the arms is also illegal according Customs (Prohibited Imports) Regulations.

There is a full colour version and nine heraldically correct official versions exist for single-colour reproduction.