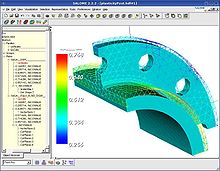 Software tools that have been developed to support these activities are considered CAE tools. CAE tools are being used, for example, to analyze the robustness and performance of components and assemblies. The term encompasses simulation, validation, and optimization of products and manufacturing tools. In the future, CAE systems will be major providers of information to help support design teams in decision making.

The term CAE has also been used by some in the past to describe the use of computer technology within engineering in a broader sense than just engineering analysis. It was in this context that the term was coined by Jason Lemon, founder of SDRC in the late 1970s. This definition is however better known today by the terms CAx and PLM.[citation needed]

In general, there are three phases in any computer-aided engineering task:

This cycle is iterated, often many times, either manually or with the use of commercial optimization software.

CAE in the automotive industry

CAE tools are very widely used in the automotive industry. In fact, their use has enabled the automakers to reduce product development cost and time while improving the safety, comfort, and durability of the vehicles they produce. The predictive capability of CAE tools has progressed to the point where much of the design verification is now done using computer simulations rather than physical prototype testing. CAE dependability is based upon all proper assumptions as inputs and must identify critical inputs (BJ). Even though there have been many advances in CAE, and it is widely used in the engineering field, physical testing is still used as a final confirmation for subsystems due to the fact that CAE cannot predict all variables in complex assemblies (i.e. metal stretch, thinning).