Before 1947, the word qirsh was spelled with the initial Arabic letter غ, after which the word began with ق. Until 1958, banknotes were issued with Arabic on the obverse and French on the reverse. After 1958, English has been used on the reverses, hence the three different names for this currency. Coins used both Arabic and French until Syrian independence, then only Arabic.

The standard abbreviation for the Syrian pound is SYP. On , the selling rate quoted by the Commercial Bank of Syria was 58.4 SYP to the . A rate of about 50 pounds to one dollar has been usual in the early 2000s, but the exchange rate is subject to fluctuations. The pound is not a hard currency, and there are restrictions on its export.

During the Ottoman Occupation of Syria which lasted about 400 years the was the currency. Following the fall of the Ottoman empire and the placing of Syria under a mandate, the was used in the territories under French and British mandates, including , , and Palestine. Upon taking Lebanon and Syria under its separate mandate, the French government sought to replace the Egyptian currency and granted a commercial bank, the Banque de Syrie (a French affiliate of the Ottoman Bank), the authority to issue a currency for states under its new mandate.

The pound (or livre as it was then known) was introduced in 1919 and was pegged at a value of 20 s. As the political status of Lebanon evolved, the Banque de Syrie, which was to act as the official bank for Lebanon and Syria, was renamed the Banque de Syrie et du Grand-Liban (BSL). The BSL issued the Lebanese-Syrian currency for 15 years, starting in 1924. Two years before the expiration of the 15 year period, the BSL split the Lebanese-Syrian currency into two separate currencies that could still be used interchangeably in either state. In 1939, the bank was renamed the Banque de Syrie et du Liban.

In 1941, the peg to the French franc was replaced by a peg to the of 8.83125 Syrian pounds = 1 British pound, as a consequence of the occupation of Syria by British and forces. This rate was based on the pre-war conversion rate between the franc and sterling. In 1946, following devaluation of the franc, the Syrian pound was pegged once again to the franc at a rate of 1 pound = 54.35 francs. In 1947, the was adopted as the peg for the Syrian currency, with 2.19148 pounds = 1 dollar, a rate which was maintained until 1961. The Lebanese and Syrian currencies split in 1948. From 1961, a series of official exchange rates were in operation, alongside a parallel, market rate which diverged dramatically from the official rate in the 1980s. 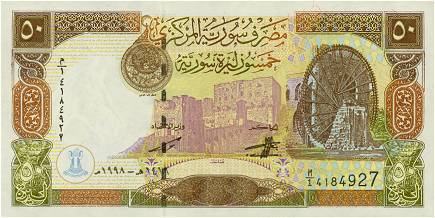 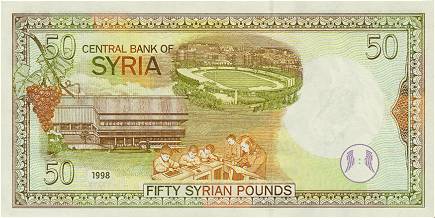 caption_left = Arabic obverse: Statue of and the Tomb of the Unknown Soldier in .
caption_right = English
width_left = 290
width_right = 290
position = none
margin = 0

Use of 10 Syrian pound coins in Norway

The shape of the 10 Syrian pound coin has been found to so resemble the 20 coin that it can fool vending machines, coins-to-cash machines, arcade machines, and any other coin-operated, automated service machine in the country. While hardly similar to the naked eye, machines are unable to tell the coins apart due to an almost identical weight and size.

As of , , ten Syrian pounds converts to 1.07 r, or about 0.20 . 20 NOK, on the other hand, converts to 3.70 USD, almost 18.6 times the value of the Syrian coin. While not easy to find in Norway, the Syrian coins are still used in automated machines there with such frequency that Posten Norge, the Norwegian postal service, decided to close many of their coins-to-cash machines on , , with plans to develop a system able to differentiate between the two coins. In the summer of 2005, a Norwegian man was sentenced to 30 days, suspended, for having used Syrian coins in arcade machines in the municipality of . [cite news|url=http://www.dagbladet.no/nyheter/2006/02/18/458229.html|title=Myntsvindlere herjer i Oslo|first=Øystein|last=Andersen|work=Dagbladet|publisher=DB Medialab AS|date=2006-02-18|accessdate=2008-03-08|language=Norwegian]